The second half of April 2022 gets a new lineup of free games! 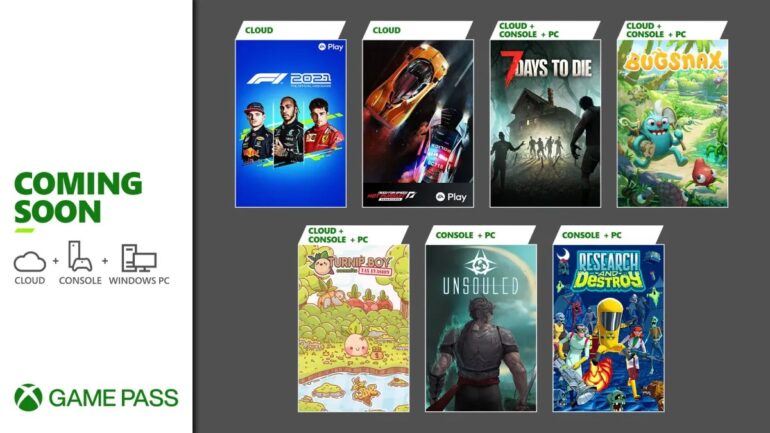 There are seven titles that will be joining the Xbox Game Pass gaming library for this month of April. There are three titles that will be available today, which are F1 2021, Need for Speed Hot Pursuit Remastered, and Turnip Boy Commits Tax Evasion. The other titles are 7 Days to Die, Research and Destroy, Unsouled, and the recently new addition to Xbox, Bugsnax. All four titles will be available at a later time.

Check out some of the details of each title below:

F1 2021 is now available on EA Play. Subscribers can experience the F1 story with cloud gaming. Live the dream of every Formula 1 fan’s dream with this game featuring challenging tracks, fan-favorite cars, and more.

Need for Speed Hot Pursuit Remastered is now available on EA Play via Cloud. The classic title gets its remastered version and relive the days of the thrill for speed while being both an outlaw and a cop. Take down lawbreakers or outsmart the heat with tactical weaponry in a super intense competitive racing experience.

Turnip Boy Commits Tax Evasion will be available today on Cloud, Console, and PC. Players will take on the role of Turnip Boy who has to find a way to pay back his debts to a corrupt onion mayor. This features puzzle solving, dungeon exploring, and a bit of plant harvesting.

7 Days to Die will be available on April 26, 2022 for Cloud, Console, and PC. Players will be in a post-apocalyptic world that is overrun by the undead and will have to survive past seven days or else they die. It is a combination of FPS, survival horror, tower defense, and RPG.

Research and Destroy is coming to Console and PC on April 26, 2022 and is available on day one with Game Pass. Take control of three Super Scientists to research and develop new weapons and gadgets in order to defeat the Supernatural hordes.

Unsouled launches on PC and Console this coming April 28, 2022 and will be available on day one with Game Pass. This is an action RPG where players will test their reflexes and land combos in order to win. Execute different skill combos and counterattacks for the maximum damage.

Bugsnax will be available on PC, Cloud, and Console on April 28, 2022. Players get invited by explorer Elizabert Megafig to join her in an adventure on Snaktooth Island, home to the legendary half-bug half-snack creatures called Bugsnax. Check out our review here.

There will be two titles that will joining Xbox Game Pass in the next two months. These titles are Assassin’s Creed Origins for Cloud, Console and PC, and For Honor: Marching Fire Edition for PC.

There are four titles that will be leaving Xbox Game Pass later this April 30, 2022. There will be a 20 percent discount for subscribers: