Here's the new lineup for this month! 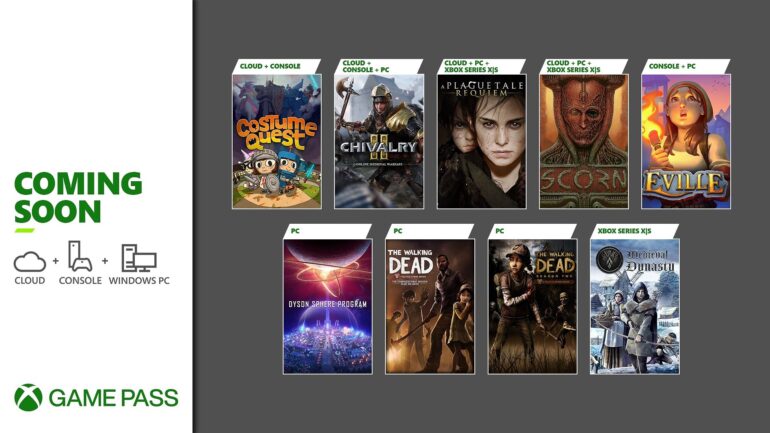 A few titles have already been revealed a while ago and that includes Chivarly 2, Medieval Dynasty, and a few more. Today, the full lineup has been revealed and some of it follows the theme of Halloween.

Chivalry 2 is out now on Cloud, Console, and PC. It is a multiplayer, first-person slasher inspired by epic medieval movie battles. Players will be going into sieging castles, fighting knights and soldiers trying to defend their lands, and more.

Medieval Dynasty will be added to the library this coming October 6, 2022 on Xbox Series X/S. It is currently available on PC Game Pass. Players will be taking on the role of a young man who has fled from war and wants to take his fate into his own hands. Master many skills, become the leader of your community and become the founder of a prosperous dynasty.

The Walking Dead The Complete First Season will be available on October 6, 2022 on PC. This is five-part game series set in the same universe as Robert Kirkman’s award-winning comic book series. Players will take on the role of Lee Everett who has gotten a second chance at life but unfortunately has been thrust into the world full of undead.

The Walking Dead Season Two launches on October 6, 2022 on PC. It follows the story of Clementine, a young girl orphaned by the undead apocalypse. She has now been left alone to fend for herself and must learn how to survive.

Costume Quest will be added to the library on October 11, 2022 on Cloud and consoles. Play in this unique RPG made by Tim Schafer’s Double Fine Productions. Players will be exploring the monster-filled neighborhood of Auburn Pines, Autumn Haven Mall, and Fall Valley Carnival. Collect magical costumes, with superpowers, unique weapons, and special items.

Eville launches on October 11, 2022 on consoles and PC. This is also available on day one with Game Pass. Players will have to betray their friends and lie their way to victory. It is a multiplayer social deduction game where players are in a village riddled with a series of murders. They must convince others that they are not the murderers to survive.

Dyson Sphere Program gets added to PC Game Pass on October 13, 2022. It will also be available on day one. Players are tasked to build the most efficient intergalactic factory in this space simulator strategy game.

Scorn gets added on October 14, 2022 on PC, Cloud, and Xbox Series X/S. It is also available on day one with Game Pass. It is an atmospheric first-person horror adventure game set in a nightmarish universe filled with hellish sites and gory beings.

A Plague Tale Requiem will be available on October 18 and day one with Game Pass for Cloud, PC, and Xbox Series X/S. Players will continue the journey of these two siblings trying to find a cure for the boy’s “sickness” and survive this new adventure.

Several titles will be leaving Game Pass this coming October 15, 2022. Check out the list below: