Deathloop joins Xbox and part of Game Pass too! 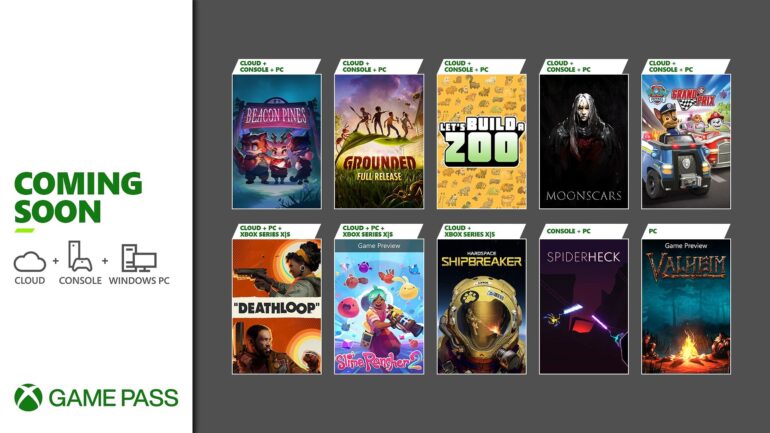 Microsoft has recently revealed the new lineup of Xbox Game Pass September 2022 free games for the second half of the month.

Some of these games have already been announced at the Tokyo Game Show that recently concluded a week ago. Today, this is the full lineup of free games that will be joining Xbox Game Pass for the second half of September 2022.

Deathloop is now available on PC, Cloud, and Xbox Series X/S. the once console-exclusive has finally arrived on Xbox shores. In this game, two rival assassins are trapped in a timeloop on an island and their goal is to escape this nightmare and end the cycle. The only way to do it is to kill all targets before they get killed again.

Hardspace Shipbreaker is now available on Xbox Series X/S and Cloud. It is currently available on PC Game Pass as well. Players control a ship with cutting-edge salvaging tech where they can carve and slice various derelict spaceships at will in zero-g to recover valuable materials.

SpiderHeck will be available on September 22, 2022 for PC and Console Game Pass. This game is a fast-paced couch co-op brawler that features spiders as their fighters. Either compete with other players or cooperate to fight against insects.

Beacon Pines is coming to PC, Console, and Cloud on September 22, 2022. This will also be available on Day One with Game Pass. This is a cute and creepy storybook adventure where players will be using charms to rewrite fate. Uncover the hidden truths and collect words to change the course of fate.

Slime Rancher 2 will be available on September 22, 2022 on Cloud, PC, and Xbox Series X/S. It will also be available on Day One with Game Pass. Players will be joining the adventures of ace slime rancher Beatrix LeBeau on her journey to Rainbow Island to look for slimes that she could wrangle.

Moonscars launches on September 27, 2022 for Cloud, Console, and PC and is also available on Day One with Game Pass. This is a souls-like 2D platform slasher where players control a fierce clayborne warrior called Grey Irma to discover its existence.

Grounded will fully release this coming September 27, 2022 on Cloud, Console, and PC. Players will be able to enjoy the full story of the game with up to three friends to explore the entire backyard.

Let’s Build a Zoo will be available on September 29, 2022 for PC, Console, and Cloud. Import and breed rare creatures, hire the right staff, and keep visitors happy with this interesting new management sim.

Valheim is coming to PC on September 29, 2022. Players will be joining others in a brutal exploration and survival game set in a procedurally-generated world inspired by Norse mythology. Players can craft weapons, construct buildings, and more.

PAW Patrol Grand Prix launches on September 30, 2022 for PC, Console, and Cloud, and is also available on Day One with Game Pass. Race around iconic locations like Adventure Bay, Jake’s Snowboarding Resort, and many more.

There are several titles that will be leaving the game library by the end of this month. Check out the list below: