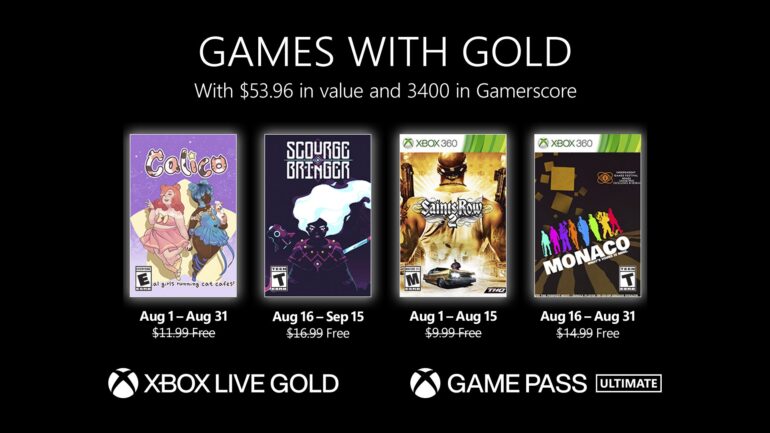 Microsoft has recently announced the Xbox Games with Gold August 2022 lineup and none of the predictions were correct.

Another month, another lineup of free games joining Xbox Game with Gold. And as usual, none of our predictions were correct and even other sites were not able to guess the right one. Games with Gold are really hard to speculate and that is why everyone just randomly chooses one. It would have been great to cap off the last Xbox 360 free games though with a bang, but it seems Microsoft has different plans.

The new lineup includes running a cat café, play a roguelite platformer, and two classics. The games included are Calico, ScourgeBringer, Saint’s Row 2, and Monaco What’s Yours is Mine.

These new games will be available to download for free for a limited time only and available to subscribers of Games with Gold and Xbox Game Pass Ultimate.

Calico is a game where players are tasked to rebuild the town’s run-down cat café and raise the felines that reside there. Create your character, choose fun clothes to wear, decorate your place for cats and human visitors, and fill it with animals. The game is low stress, creative, and awesome.

ScourgeBringer is a platformer set in a post-apocalyptic world and you are Kyhra, the deadliest warrior of your clan. Fight enemies and bosses that guard the secrets of the Scourge.

Saint’s Row 2 is a great classic entry from the Saint’s Row series. The protagonist has been in a coma for five years and wakes up to learn that the 3rd Street Saints got disbanded and their territory taken over by syndicates with corrupt corporation backing. Rebuild the Saints and take back the territory.

Monaco What’s Yours is Mine tasks players to assemble a crack team of thieves and make a successful gig work. Choose from one of eight highly skilled and highly colorful characters each with their unique set of skills like the Pickpocket, the Locksmiths, the Cleaner, and more.