Here's your next games with gold titles! 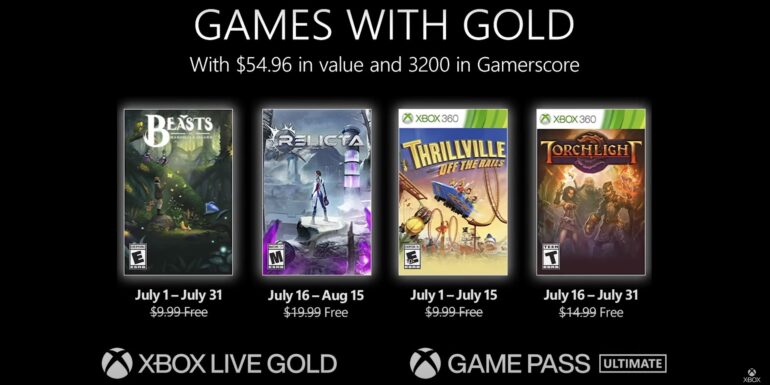 Compared to the predictions lineup we did a while ago this time no game was luckily predicted. All titles look to be quite random and no hint to make someone guess which titles are up next. Just as usual, there are two Xbox One titles and two Xbox 360 backwards compatible games to download and play.

Schedules for Each Title

The titles that are included in the Xbox Games with Gold July 2022 lineup are Beasts of Maravilla Island, Relicta, Thirllville: Off the Rails, and Torchlight. Of all four titles, the highlight of them all is Torchlight, which is a great dungeon exploration RPG, which was a big competitor of Diablo.

Beasts of Maravilla Island is a game where players take pictures of creatures living on a mysterious, dreamlike island. Explore a 3D jungle filled with life and flora, explore, climb, and solve puzzles. Check your grandfather’s journals and use his old camera to take pictures of otter-crocodiles, birds disguised as bananas, and more.

Relicta is a game where players take on the role of a physicist that got stranded on a derelict moon base. Find a way to get out by bending gravity and magnetism. Look for clues in the darkness of the lunar craters, which could either kill your daughter or save humanity forever.

Thrillville: Off the Rails is a game where players create, design, and then run your own theme park. This includes five new parks and 100 new missions to explore and solve.

Torchlight is a classic dungeon exploration RPG where players fight various types of monsters as they delve deeper into the depths. Dungeons are randomly generated and filled with hordes of monsters and lots of loot to collect. With your trusty animal companion at your side, take on main quests, side quests, battle big bosses, and have a chat with citizens of towns.