A lot of changes and fixes with this new update. 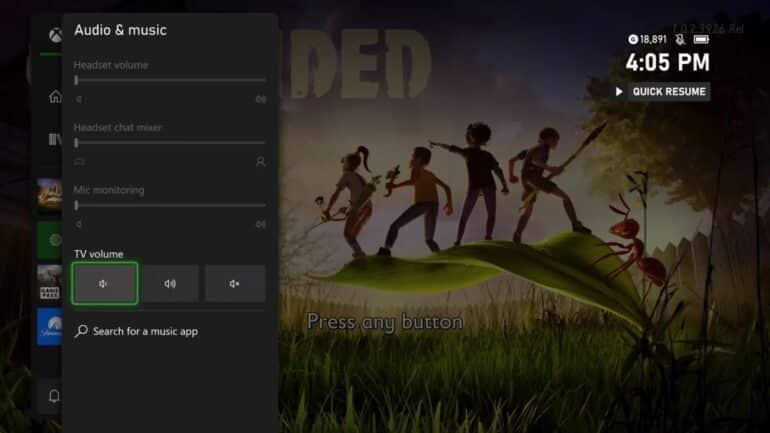 The new Xbox October update brings several changes to the game like the ability to change the TV volume from the Xbox Series X/S consoles, mute all startup sounds, improve setup screens to choose and change the home Xbox, an Xbox controller firmware update, and more.

The Xbox Series X/S consoles can now use the HDMI feature called Consumer Electronics Control or CE and send commands to and from CEC-enabled devices like TV that are connected to the console. Players can now change the TV volume within the audio and music section of the Xbox guide.

Just go to the guide and navigate to the Audio and music section. It will show buttons that will allow players to change the TV volume or mute it.

A fan-requested feature, the mute startup audio, is finally available. Just go to profile and system then settings, then general, then volume and audio output, then additional options, and select mute startup sounds. The power chime can be adjusted as well.

Players can now make a console the home Xbox to give friends and family access to games and content when they are not signed in. It will allow them to play digital games offline too. There are also new setup screens to make it easier to select and change home consoles.

Players can now configure the Xbox consoles to use different power modes. The information for these newly named power modes have been updated too. Standy is now updated to Sleep and Energy Saver is now Shutdown Energy Saving.

The Xbox passkey and guest keys are now called Xbox PINs and Xbox guest PINs. The PIN can be used with any Xbox console that players sign into.

A new firmware update has been released. It fixes a bug for USB flight sticks that connect to the Xbox Adaptive Controller. There are also other additional bug fixes for these controllers:

Players can now use the Xbox app to trip the length of gaming video clips. They can adjust the start and end of the clip and then share it with friends.