How to beat Shamura in Cult of The Lamb: Boss Fight Guide 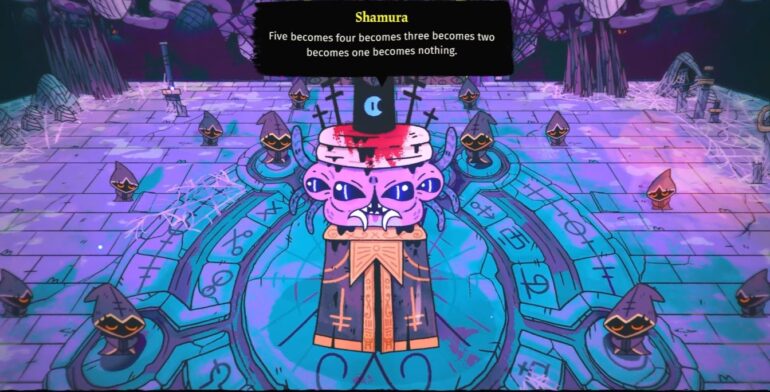 Spiders are majestic insects that have been around since ancient times. But in Cult of The Lamb, it isn’t all fun and games as the 3rd Bishop, Shamura, found in Silk Cradle is considered not only the scariest among the 4 Bishops but also the toughest to beat. Defeating will lead to unlocking the final boss of the game so we have created the guide to help beat Shamura in Cult of The Lamb once and for all.

Shamura’s appearance is that of a giant spider. He moves like one, swings like one, and even bites like one. So it is very tricky to confront him. Make sure that your Lamb is ready and strong enough to fight against this Bishop as things will get more wild from here on now.

Despite his gigantic size, Shamura has quick reflexes in which he can perform quick slash attacks in close combats. Spider-like minions will appear as well and will try to block your way. Defeat them and get out of its attack range to avoid taking a huge toll of damage or perform a dodge roll.

How to Defeat Shamura in Cult of The Lamb

Shooting firebombs is something that Shamura will occasionally do after doing close combat attacks. Getting out of its range of attack is the only way to avoid it. If directly taken, it will stun you and cause some serious damage.

Like all spiders, Shamura will quickly zipline itself and will come out quickly for a lethal strike. He doesn’t stay in the air for a long time and only for a second. Once he comes for a lethal attack, he will follow it up with an upper slash.

A deadlier projectile to watch out for from Shamura is when his attacks come crashing down from the sky like a meteor. These green projectiles come covering a huge part of the arena so finding a gap between the range of the attacks is one of the best ways to avoid it.

The most powerful attack of Shamura will be when he will be leaping into the air and stays in the air for a moment and comes back down doing a body slam. This attack happens when his health is only 1/3% left and usually happens 4 times before doing another attack. Timing is the key to strike and a chance to defeat him will occur.

After successfully defeating, the Heart of The Heretic will appear. Collect it and the last chain to unlock the Final boss of the game will be done so.

Check out this video walkthrough made by ZackScottGames on his Cult of the Lamb – Gameplay Walkthrough – Shamura Boss Fight:

Cult of the Lamb is now available to play on the Nintendo Switch, PlayStation 4, Xbox One, PlayStation 5 & PC via Steam. See below for other Cult of The Lamb Guides: