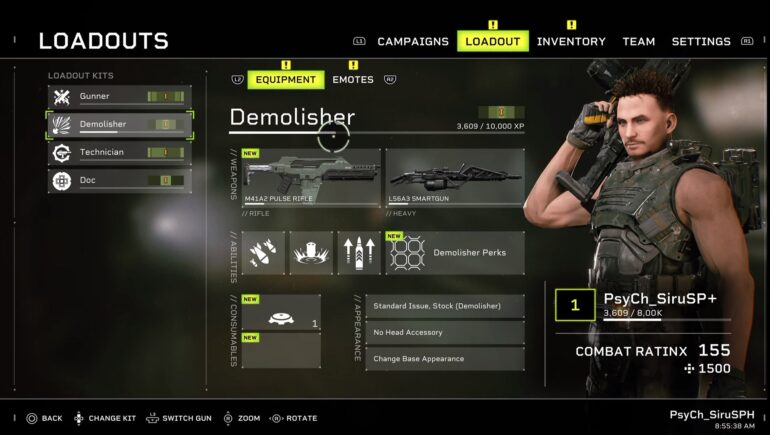 Aliens: Fireteam is very much a teamwork based shooter. You need to work together with your squad in order to maximize your chances at success. There’ll be a plethora of xenomorphs and even other types of dangers coming at you from all sides so it’s best to know what your role is in the team. As part of our Aliens: Fireteam Elite guide, here’s everything you need to know about the loadout kits.

Everything You Need To Know About Your Fireteam

You can only have three members with yourself included. Any available spot will instead be replaced with a generic synth with no special abilities. This is why coop with a friend is important for Aliens: Fireteam as each classes you can pick from brings something substantial to the mission.

You’ll have four classes to pick from initially. You’ll unlock a fifth class once you’ve finished the game. It’s best to have a good variety with your fireteam as each class specializes in one particular way. While you can pick the same class as your coop team, it’s advisable not to have duplicates.

Each class has its own individual rank. You’ll have to spend some time playing through classes in order to gain experience for it and unlock new weapons and perks. Each class has two abilities that can be manually activated along with a passive. One of their abilities can be altered should you reach Rank III.

The Gunner is your standard leader with all the abilities that come with it. The Gunner comes with a rifle and a close-quarters weapon at hand. This character class is great for those who prefer to be adaptable to any situation at hand.

The Gunner contains quite a few unique modifiers that greatly increase the combat abilities of his team. This class is a must have for any fireteam due to its versatility and support capabilities.

The Demolisher are for those who want to solve every problem with more bullets and firepower. This class fights fire with fire. The Demolisher comes with a rifle and heavy weapon. Great for mowing down large numbers of enemies as fast as possible.

The Demolisher is great for those seeking to clear out rooms by spraying everything that has a pulse with as many bullets as it can eat.

The defacto Engineer of the squad, the Technician is an excellent defensive class for those seeking to stop the advance of xenomorphs. The Technician can place down turrets and throw a device that can slow incoming hostiles your way.

The Technician is an excellent class for those who would prefer to prioritize on their defensive capabilities.

Guide to The Doc

Prioritizing keeping their allies alive, the Doc is an excellent support class and a necessity for more difficult missions. The Doc can heal allies and boost overall team performance just by being nearby.

On harder difficulties, the Doc is a must have due to its excellent support, buffs, and healing abilities.

The Recon class is the fifth loadout that can only be unlocked after you finish the campaign. This class specializes in detecting enemy positions and replenishing the team’s ammunition while providing support buffs.

The Recon class is sadly a bit underwhelming in comparison to the other loadouts. It isn’t a bad class but it’s abilities put it behind the others.