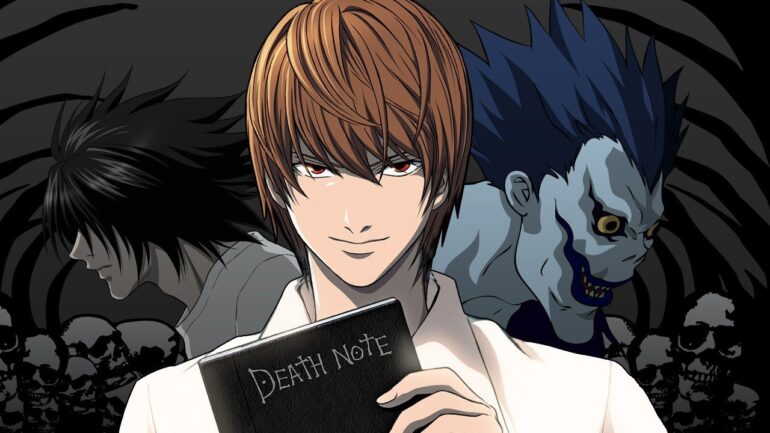 When mortals gain the ability to determine the deaths of their neighbors, they start to believe themselves to be God. Death Note is without a doubt, one of the best anime of all time where a game of wits plays out between a young man with a God complex and an eccentric investigator who is obsessed with solving the case.

It all starts when a notebook falls from the sky and a young man named Yagami Light picks it up, he later finds out that it is called the Death Note and that if someone writes somebody’s name on it, then they can kill them in any way. Light begins to believe that he should just kill all the criminals in the world so that he can cleanse the taint and feels that he should rule over everyone. He then starts murdering them in ways that has baffled the police.

This anime will make one question what is right or wrong. Is it alright to kill convicted felons? Was their crime severe enough that they deserve the death sentence? Do we have the right to pass judgement on to those we don’t even know? But this isn’t where the anime excels at, it is when a famous investigator catches wind of the strange phenomenon. L plays the guessing game to find out just who the killer is, while Light continues his killing spree and tries his best in avoiding the eyes of L while trying to learn his true name in order to kill him through the Death Note.

The way the story moves is something that will leave you on the edge of your seat each episode. There is something amazing in how it draws you in and always gives you a great sense of thrill and amazement as to how they are able to continue playing the game of cat and mouse.

Light and L are what drives the show to its full potential. Light is charismatic, extremely smart, good looking, and is a psychopath who is hell bent on ruling the world through his perceived notion of justice. Not to mention he can make eating a potato chip look cool.

L is creepy, eccentric, beyond brilliant, observant, and has a sweet tooth. He is the only one who can truly fight Light on equal footing despite his feet always being on the chair. The two complement each other so well that it is nothing more than the perfect rivalry between two of the greatest minds in anime.

The anime is one hell of a ride in the 1st half but the 2nd half just feels bland in comparison. Things could have ended in a nearly perfect sense at one point but the creators decided to stretch it out even further and it doesn’t ever feel as satisfying towards the end. Although there was a decent amount of satisfaction to be had at the very end of this amazing journey where it sort of redeemed the entire 2nd half but still felt lackluster when compared to how far the 1st half went.

This anime is complex with a lot of twists and turns that will put one’s mind to the test. This is one of the most satisfying series to have ever existed and it is the perfect one to watch for those who are looking for a suspenseful show with deep psychological and morally impacting lessons that would make one question what they would ever do if they ever had that kind of power in their hands. Would they follow in the path of Light and cleanse the world of their own definition of evil people? Would they be just like L and find out the truth of the mysterious power and ensure that no mortal would ever use something that is beyond the level of curses? Or would they create their own definition of justice that they will then show to everyone else in the world?