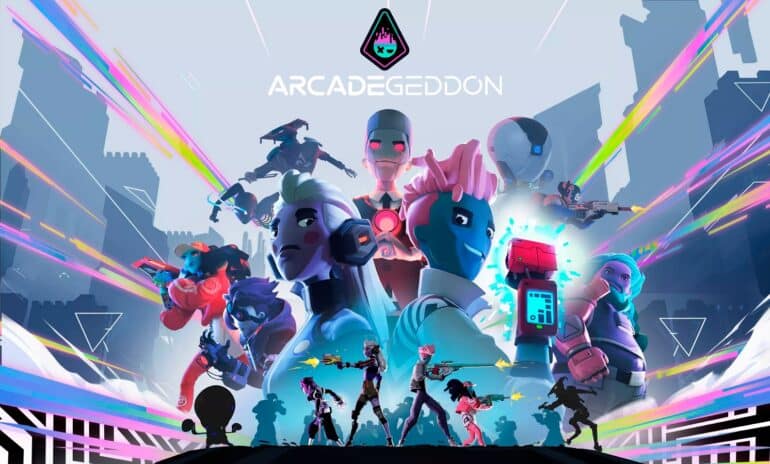 There are many games that poke fun at corporations and the parody that is “the game developer” but I don’t usually see a game that goes so as to go against the grain of the thing it is making fun of and actually produce a product that doesn’t expect you pour in dozens of hours in the name of “progression”, at least that’s what I’m experiencing with Arcadegeddon. The game itself is a parody of every that’s been popular within the last 5 years. It’s got a bit of Cyberpunk, Fortnite, and electro dance music all rolled in one convenient arcadey package.

Arcadegeddon is a 3rd person rogue-like shooter that’s both casual and competitive. Players take control of “Plug”, a regular gamer doing regular gamer things. Your character’s uncle, Gilly, created a new arcade game that has the potential of being the next big thing in all of gaming. And then your classic evil mega-corporation (AKA FunFUNco) walks in and tries to perform a hostile takeover of Gilly’s. This all sounds a lot like Ready Player One. Guess uncle Gilly should have set up a competition for the rights over his technology.

So, having skipped the competition, we head straight to the part where we recruit all of the city’s gamer gangs in an effort to “disrupt” corporate activity within the game. It doesn’t make a lot of sense but it gives us a reason to present ourselves to the gang leaders (all of whom appear to be chilling out in this one arcade, btw.) and recruit them to the cause. But there’s a catch, no self-respecting punk will listen to someone who doesn’t walk the walk.

To recruit the leaders and add their members to the growing tally of the game’s active users, the player needs to plug in and enter Arcadegeddon and show off the game. Think of it like streaming a demo and you’re trying to get the word out that this is the game to play.

The leaders will choose the challenges you need to do on that run. You are only allowed take on one challenge at a time. Which is fair enough. It would be a very short game otherwise. Plus, there isn’t exactly a lot of variety when it comes to environments.

What the environments lacked in variety, is certainly made up for by the weapons in the game. In each run, you can have your choice of any 3 weapons. With enough levels, you can also have your choice of Gauntlet Ultimates from a current selection of a dozen or so. Killing enemies and damaging bosses individually changes both Ults and you can choose when to use the one or the other by pressing R1 or L1 and firing to confirm your choice.

The game has both your typical range of gun types but it focuses less on mundane things like different fire rates and damage numbers. Instead, they lean more towards elemental types.

The Magma gun series is my personal favorite, this line of guns does not run on limiting magazines, it goes by a heating system similar to that of Apex Legend’s L-Star LMG. They all do damage over time which is good since the enemies are corporate bots and I WANT THEM TO BURN! Anyways, electricity stuns enemies and zaps nearby enemies, freeze weapons… eventually freezes enemies. Electric weapons are nice but rely on magazines. I don’t get freeze weapons though. They have weak damage and I feel like I’ve wasted a bullet shooting an already frozen enemy.

The runs themselves can be performed solo or up to a group of four. Outside of story progression and challenges, doing runs is all about bragging right on top of the leaderboards. I really like this since I love doing solo runs and comparing my scores to other players. I even held 3rd place for 15 minutes. I can only imagine how competitive it can be once it is out of Early Access.

One of the things I didn’t like about this game is the fact that there are some pretty underwhelming guns in the game. This isn’t so much of an issue in solo runs as you can easily swap guns on the fly. It’s only in group runs do the pickings become slim. At least at first. And that sort of thing can have some effect on the group down the line. Personally, I don’t really like many of the shotguns in the game, the very definition of video game shotguns, and good luck getting consistent damage even in close quarters.

Another thing I kind of notice in the game is that it takes you a while to notice card effects. Since the cards are RNG, I try to build around it but unless it’s 5th stage or something and I have enough cards to make a deck with, I’d rather just use an assault rifle and/or submachine gun. I also hope there’s a machine in the future that allows us to improve our cards. There’s a machine that increases difficulty but not cards! C’mon.

The last of my annoyances with the game from a more technical side. The AI doesn’t know what to do if the player stands too close to an edge. I mean, it’s cool that they do something but It’s easily exploitable. At least the bosses are less broken… but aren’t immune to it. Speaking of things that won’t work. I can’t seem to apply changes to the control scheme. No matter what I do. This is very annoying since I play with custom controls. Not exactly deal-breaking but somewhat annoying.

The most fun I’ve had playing this game was when I was doing solo runs. The thrill of making it up the leaderboards, only to be beaten by someone who has unlocked a headstart at level 50 or something. And props to that guy, I’d imagine a max difficulty starting run is magnitudes more difficult than anything a starting player can deal with. So good on them.

I’ve tried multiplayer and group runs but I never seem to vibe really well with it. It’s either my teammates are taking their sweet time looting or already miles ahead in the next fight before I even get my first gun. PvP is sort of more balanced but I find it such a hassle to play after a few games. Plus, we’re all playing for the same XP and tickets – and I can get much more of doing solo hour-long runs. In this game, unless I have friends on board playing it for fun, multiplayer’s not for me. But that’s just me. It might be fun for other people.

All in all, Arcadegeddon is a fun, casual rogue-lite where you choose the pace at which you want to play the game. The game’s not worried about players playing in a certain way. And though I wish there were more in terms of enemy types and locations, the game has some of the better boss fights outside of single-player games. The very reason to stick around with this game is to see how high you can go on the leaderboards. Like the best arcade games, it gives everyone a shot at the very time. But there’s no denying that higher-level players have a better start than most.

Arcadegeddon – Review
Score Definition
When the issues of a game are rolled and stomped by its greatness, then it’s something to invest on if you have some spare.
Pros
Play at your own pace
Simple yet compelling gameplay loop
Best played cooperatively with friends
Cons
Story and characters are just there to set you up for the next run
Enemy AI breaks down if the player is near a ledge
Some weapons are woefully underwhelming
changes to the controls do not take affect as of yet
8
Great