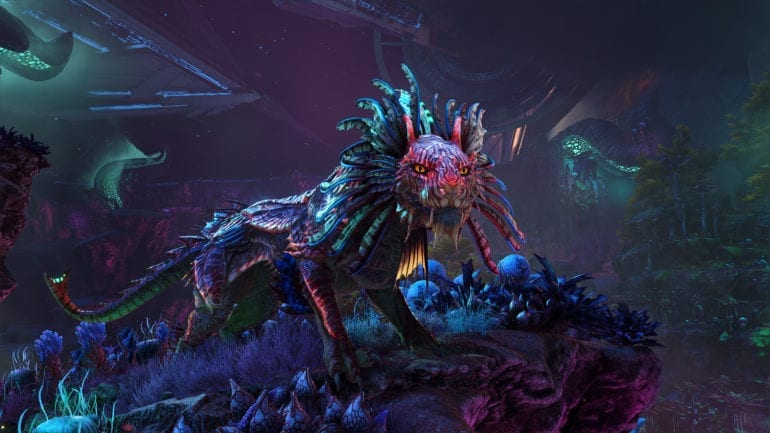 After six years since Survival Evolved first arrived on Steam Early Access, the last chapter that will conclude the whole story is finally here. Survivors will explore a vast new world teeming with strange biomes and exotic creatures, while engaging in story-oriented missions that test their mettle, ingenuity, and survival skills. This final confrontation between the sprightly HLN-A and the deranged Sir Edmund Rockwell takes place on a gigantic colony ship travelling through deep space, and players will need to use all their ARK experience to survive.

The ARK: Genesis Part 2 expansion pack is now available to download as part of the ARK: Genesis Season Pass ($29.99 USD) for Steam, Epic Games Store, Xbox One, and PlayStation 4. In addition to Genesis Part 1 and Part 2, the season pass includes a ‘Noglin’ Chibi cosmetic, a ‘Shadowmane’ Chibi cosmetic, a new cosmetic armor set, and an in-game, artificially intelligent companion called ‘HLN-A’ who can scan additional hidden Explorer Notes found throughout the other ARKs.

Check out the definitive game collection ARK: Ultimate Survivor Edition, specially priced at $59.99, packed with everything the franchise has to offer, including the ARK: Survival Evolved base game, and all expansion packs: Scorched Earth, Aberration, Extinction, and Genesis Part 1 & Part 2.

NEW STORY-ORIENTED MISSIONS
A holographic guide, HLN-A, offers a wide array of engaging new story-oriented missions at varying difficulty levels, as Survivors build up strength for a final battle with Rockwell. Complete missions to earn map-wide bonuses and Hexagons, which can be spent for extra resources, Engram Points, TEK items, travel between environments, and more. Discover Explorer Notes and environmental cues along the way to learn even more about the ARK saga history.

EXPANSIVE WORLDS TO CONQUER
Emerge from the Genesis Part I simulation into a gargantuan starship filled with unique biomes, including beautiful elysian fields, an exotic twilight realm of highly evolved lifeforms, the depths of outer-space, and even the innards of the ever-expanding Rockwell himself. Whether it’s sentient alien plants, Rockwell’s digestive fluids, or asteroids warping in from intergalactic space travel, each biome presents unique hazards, but also opportunities to acquire new resources and creatures — including the powerful new ‘Mutagen’ that enables you to further evolve your existing tames!

POWERFUL NEW GEAR
As you brave the many dangers of this new world, you’ll gain access to powerful new tools to aid you. You’ll learn how to place remote cameras, pull off tricks with a floating skateboard-like Hoversail, take care of your eggs with the high-tech Incubator, shoot arrows made of pure energy with the Tek Bow, even engage in a Real Time Strategy command mode within the new Exo-Mek — and far, far more!

ARK: Survival Evolved is available now on Steam, Epic Games Store, Xbox One, PlayStation 4, and is optimized for Xbox Series X/S. In ARK players are stranded naked, freezing and starving on a mysterious island, where they must hunt, harvest, craft items, grow crops, and build shelters to survive. Use skill and cunning to kill, tame, breed, & ride the dinosaurs and primeval creatures living in the ARK. Team up with hundreds of players online or try solo survival in offline play.