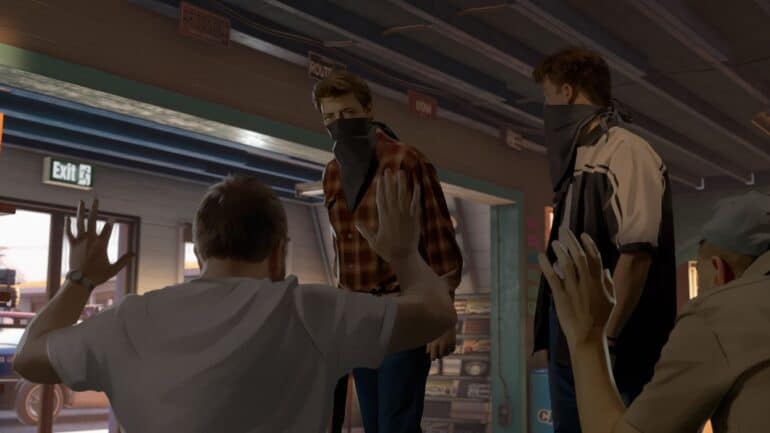 As Dusk Falls is a game more accurately described as an interactive TV series than an interactive movie. It spans the perspective of multiple characters throughout a journey centering on one tragic event that tests the moral compass of those playing it. The game places players in control of making decisions for certain characters that will ultimately influence their fate.

At a glance, As Dusk Falls doesn’t leave an excellent first impression. It renders its graphics in an interpolated rotoscope presentation frame-by-frame instead of smooth, fluid motion capture animation. After doing some research on the developers Interior/Night, it’s understandable that the budget of a 40-man studio isn’t going give them much power for an impressive display. But despite this, I was actually rather impressed at how well-written and complex the narrative and characters were.

This was created from the ideas of Caroline Marchal, who had experience as the lead game designer for Heavy Rain and Beyond: Two Souls. So there are some experienced hands despite As Dusk Falls being Interior/Night’s first game ever since becoming an independent studio.

Whether you’ll like As Dusk Falls depends on how far into interactive storytelling games you are. It has its own highs and lows which you need to know about before diving in. This review will avoid any spoilers entirely.

As Dusk Falls tackles some pretty mature themes. Drug usage, infidelity, and trauma aren’t strangers to video games but to see it in this TV series-like format is entertaining. According to Marchal, their goal was to lure more people into video games by making them interested in the narrative. Those who love to watch shows like Breaking Bad but do not necessarily play video games might find a lot to love about As Dusk Falls.

There are many characters in As Dusk Falls, but it all really centers around the antics of the Holt family. Specifically, Jay, who struggles between his good nature and the bad deeds of his family. A robbery gone wrong forces the Holt brothers to hide in a motel in an effort to hide from the local police. After a series of hostilities with the hostages, things go from bad to worse. The story actually spans beyond the events of the robbery, showing flashbacks prior to the present and the aftermath of the tragic event that takes place in Desert Dream.

The characters of As Dusk Falls are written well. They’re complex, interesting, and have a whole lot of depth. This makes uncovering their motivations and interactions all the more entertaining. Despite the frame-by-frame interpolated rotoscope style, there is emotional resonance between characters and the player during what they go through. Tense moments when you have to decide between what’s moral and what’s practical are a dime a dozen in this game. It really does a good job of keeping me on my toes and interested in the plot twists and turns.

During key moments, you will be making tough decisions for these characters. There are a lot of endings in As Dusk Falls, and the limited animation that gives it a distinct style actually did Interior/Night a favor by allowing them not to skimp out on the conclusion of your choices. Sure, some choices still lead to the same outcome but there are many important variations that could influence whether someone lives or dies.

The downside of As Dusk Falls is that it shares many flaws often present in interactive storytelling video games. In order for something to be a game, it needs to be fun. There just isn’t that much fun to derive from quick-time-events, which is the closest thing you get to gameplay. This makes replayability a challenge as replaying certain sections you’ve already seen before making a different choice can be a bore.

Interior/Night does a good job of allowing players to replay certain sections. With the Explore Story option in the Main Menu, you can select from a certain point in the story and progress from there making different choices. You can conveniently choose not to overwrite your saved file so that you can explore other options without having to overwrite your whole journey.

I can’t help but wish that there was more gameplay. However other games such as visual novels have proven that there is room for entries like As Dusk Falls. There is even a robust option for multiplayer allowing up to 8 people to join the story and vote on decisions. I appreciate that the developers took the time to develop a mobile app that acts as a separate controller for local multiplayer sessions.

As Dusk Falls is a tense and exciting drama about crime and the families who get involved in it. If you love crime-drama TV shows, then you’ll feel right at home with this game. This storytelling video game feels intense and interesting at every turn. However, you should be aware of its shortcomings and limitations before purchasing. 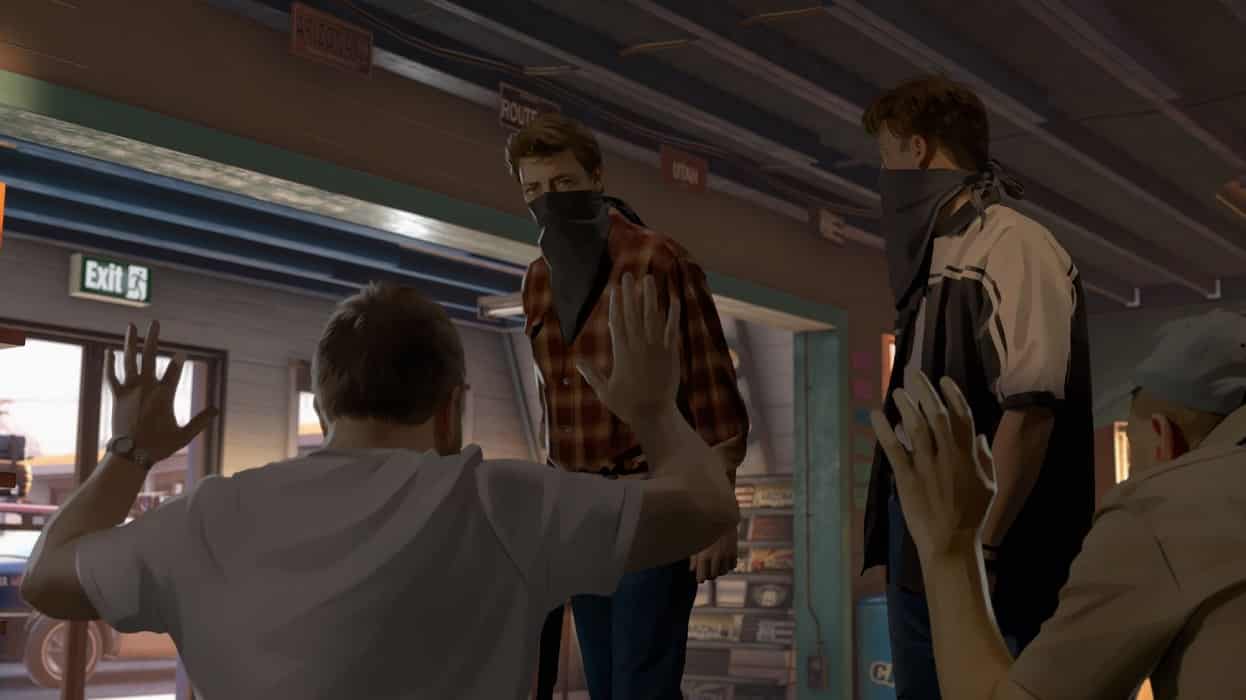 As Dusk Falls – Review
Score Definition
When the issues of a game are rolled and stomped by its greatness, then it’s something to invest on if you have some spare.
Pros
Accessible Multiplayer Options with Companion App
Tense and Interesting Story
Interesting and Complex Characters
Exploration Mode Allows For Replaying Certain Sections Without Overwrite
Cons
Heavily Reliant on QTE for Gameplay
Distinctive Art Style and Animation May Turn Away Some
8
Great