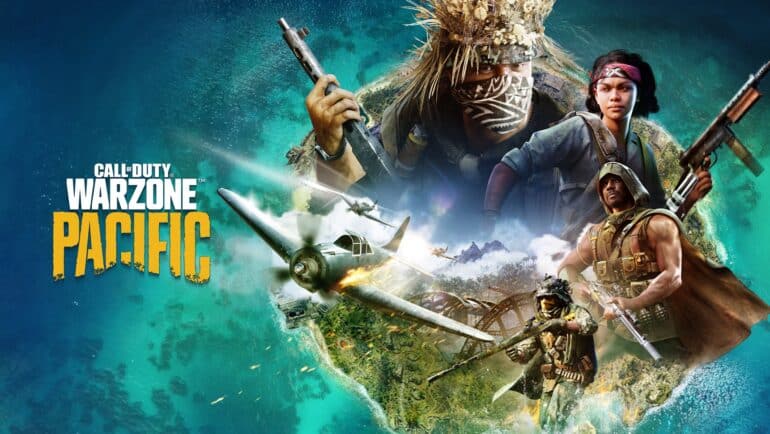 First season of Vanguard and Warzone Pacific will begin December 8 with exclusive access to the new Call of Duty Warzone Pacific map for Vanguard players for 24 hours. It’s a haven for combatants of epic proportions. Before you set foot in Caldera, here’s what you need to know about the first episode of Season One.

Call of Duty: Vanguard owners will be able to play the new Call of Duty Warzone Pacific map on December 8, 2021. Players in Warzone’s free-to-play model can join the next day.

The new Caldera map, which is claimed to be similar in size to the outgoing Verdansk battlefield but larger. Until Tuesday, December 7, 2021 at 1 p.m. EST, “Last Hours of Verdansk” will be a limited-time event in Call of Duty Warzone.

The new Call of Duty Warzone Pacific Map which features Caldera, the new area in Warzone Pacific and Vanguard Season 1, has finally been shown in all its glory by the official Call of Duty Blog. Every drop zone, including Resort, Sub Pens, and Village, can be seen in this map.

To celebrate the release of Caldera, this brand new map in Warzone Pacific, Vanguard owners will have access to the map for 24 hours ahead starting on December 8.

Rebirth Island will be open to all Vanguard owners for the first 24 hours of exclusive access. All Warzone players are able to access Caldera after this special time period, with Rebirth Island returning later in Season 1.

Expect a special one-day-only Rebirth Island Playlist – including Resurgence and Mini Royale – to be released immediately at the start of the season before everything shifts to Caldera for the week beginning on December 9.

As soon as Operation Vulcan gets underway, players will be able to traverse Caldera’s 15 vast and varied zones for exploration and combat. There are also hundreds of lesser points of interest that can be used to your advantage.

With our topographical overview, we’ll begin our journey through Caldera from north to south on the following drop zones.

The rich agricultural areas directly south of the volcano are the main attraction on Caldera. Various features in this area include an administration center, a water tower, stables, and other modest industrial depots storing agricultural machinery and storage. There are various rural agricultural buildings, silos, and lakes, as well as logging camps, a military outpost and communications tower, and steep crags.

In anticipation of a beachside storm, a vast network of trench defenses lies beneath a communications center, radar array, barracks, and massive military installation on the island’s northwest coast. There are lots of main highways, dirt tracks, footpaths, goat trails, and jungle overgrowth to trek in all directions.

Caldera’s main city is built inside a wide natural basin along the island’s southern borders, and features historical landmarks like the Royal Theater, the Capitol Building, and art deco architecture like the Fire Station and Police Station on each side of a functional tramway system. Coastal developments south of the city offer a beautiful beachside yacht club and bar where a squad could be prematurely celebrating their Battle Royale triumph.

Just south of the Airfield, a medium-sized power plant with two smokestacks stands out among the beautiful flora, terraced waterfalls, and old ruins. A big radio antenna and a civilian radio station are further south from the plant.

While most aircraft use the main airfield and Caldera Terminal airstrip to the southwest, there is a backup runway in the northeastern corner of Caldera for those stationed at Beachhead or Arsenal–Docks. To reach this seaside promontory with a runway of dirt, you’ll have to trek over rough buttress cliffs and past single houses and destroyed farmsteads. A military command center with its own secrets is further in the bush.

This gigantic industrial dock complex once controlled by the Ocean Freight Company boasts five massive cranes, a huge ship hangar, the company’s long-abandoned headquarters, and a complete distribution yard (emphasis on the word shipment). A military base with Quonset barracks near the Arsenal, and a complete fishing hamlet with bamboo houses near the Runway’s pristine forests.

Caldera’s northwest region contains a large shipyard and an advance base, as well as interesting tactical positions like deep drydock basins. A command center, admin structure, barracks compound, training course, and firing range are further inland, with beaches and a small radar array east of the main Arsenal.

This is the ridge. The island is called after a dormant volcano whose gigantic peak dominates the map. The exposed character of the location offsets the height advantage gained by landing atop the caldera throat and Axis military artillery installation under construction. The main gondola station that shuttles from the Peak to the Runway, or the magma chamber and what it constructed during its slumber.

Mining operations for phosphate include huge grinding machines, mine gondolas running from the canyon to the docks, smaller industries and steep embankments, all of which provide different sorts of involvement. Operators can also explore a vast factory compound, ancient mine workings, and even a remote petrol station and grocery store.

Unspoiled by war, a little village’s bamboo cottages, rice fields, and rugged mountains remain untouched and waiting to be explored. The main tarmac road that circumnavigates the Caldera lies further south and east. It is surrounded by wildness, with light industrial facilities, 1930s contemporary structures, and residential homes carved into the hillside with anti-aircraft emplacements to deal with nearby Airfield activity.

The Royal Cabana Resort offered pristine sandy beaches, superb surfing, cabana hut clusters, and a grand main hotel construction. Caldera is a deserted resort with easy access by automobile. A little square with a clock tower, a bus stop, and the hotel entrance. The resort has huge, verdant grounds with modest pools, ferns, and palm trees to explore.

This untouched archaeological site, north of the river village and west of the vast mine operations, has the ruins of houses built in a megalithic style around or before the 12th century, with baluster joints that mirror natural volcanic geological columns. Find these along a creek, and continue east through a jungle valley to larger ruins deep in the hillside trees. There are also tiered pools and lush hot springs.

While most aircraft use the main airfield and Caldera Terminal airstrip to the southwest, there is a backup runway in the northeastern corner of Caldera for those stationed at Beachhead or Arsenal–Docks. To reach this seaside promontory with a runway of dirt, you’ll have to trek over rough buttress cliffs and past single houses and destroyed farmsteads. A military command center with its own secrets is further in the bush.

The scary Sub Pen called the Shark’s Lair is cut into a natural cove along Caldera’s eastern coast. The Axis built the lair to keep its naval U-boats, one of which is still docked here. Outside it, a bunker compound with a sophisticated underground tunnel system can be investigated for supplies or contracts.

Featured Playlists will include return visits to Rebirth Island for Resurgences and other game modes, while new limited-time modes will center on Caldera, including Vanguard Plunder, its own Vanguard Resurgence mode offered by Beenox, and other festive surprises.

When the CIA’s most elite task group deals with Stitch on August 24, 1984, they unearth an underground German World War II bunker in the heart of Downtown Verdansk.

It’s a familiar voice, Captain Butcher, who mocks the task force for their lack of subtlety as they follow the sounds of a potential intruder in a tunnel system.

Vanguard (S.O.T.F. 001) was one of several Special Operations Task Soldiers (S.O.T.Fs) founded by Butcher during World Conflict II as a means of ensuring the ultimate destruction of Axis forces that had survived the war. In order to hear the account of Perseus’s annihilation, Adler, Woods, Mason, and Hudson sit down.

There, they discover that it all began in the Pacific.