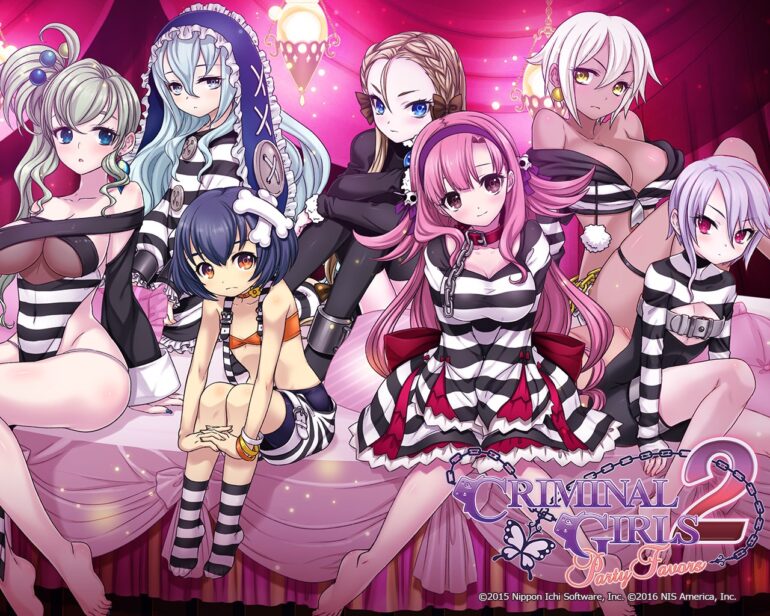 Japan loves its weird and sexualized games, but it’s rare when those games make their way to western markets. Usually they play it safe and release games from franchises that have been around for ages while keeping all the fresh weird games for themselves.

Criminal Girls: Invite Only was one of those games that made its way to western markets back in February of 2015, sparking controversy with its heavy censorship and overall unique gameplay, given an average rating along the board. Now it’s sequel, Criminal Girls 2: Party Favors, has just been released and with promise that it will right the wrongs of its predecessor.

In Party Favors, you play the role of a Program Instructor who has to lead a group of girls who are labeled “delinquents” through a Reformation Program in the Hellspire. Delinquents are people who, if given the chance, would have become criminals later in life and end up in Hell but past away before that happened. They have been given a chance to change their ways in the afterlife before being condemned in Hell for all eternity. 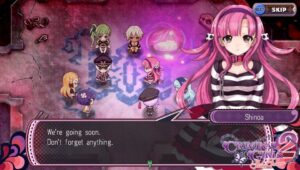 The premise is simple enough but you as the Program Instructor have lost your memory and have no clue what is going on. Along with the amnesia, half of your girls are reluctant to follow you. After a short time everything begins to go crazy and you meet another Program Instructor who states that your group was only suppose to have six girls; yet there have been seven the whole time. The other Program Instructor states that there is a convict hidden amongst your group and in order for the Hellspire to be safe, they are going to send your whole group to the bottom of Hell. Now it’s up to you to get your girls back to the Hellspire while trying to figure out which of the girls is actually a convict.

Party Favors is a classic dungeon crawler with turn based combat and random encounters. In battle you’re given four choices to make, each being a recommendation from one of your active members. One new mechanic during battle is the coaching system; you have four different coaching techniques that will change the stats of your girls depending if they are currently an S or M. Your girls level up by gaining experience in combat, but abilities and skills are gained by other means. This is one of the unique aspects of Criminal Girls, in which you choose a girl to motivate and you are taken into a minigame.

Depending on the type of motivation, you’re required to accomplish different tasks to be successful in the minigame. Once the girls earn enough experience from motivation, you are given a choice of two skills or abilities to choose from for the character; One is an S while the other is an M. Which one you choose will change the attribute of your girl and how they will react to certain coaching techniques. In the first game, Invite Only, the motivate minigames were the most censored part of the game and what drew many people away from purchasing the game. Party Favors, does censor the minigame but only in removing the voices of the girls and sometimes adding a new piece of clothing. 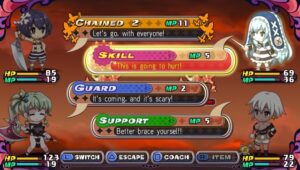 Like its predecessor, Party Favors has a chibi style of artwork during its dungeon segments along with its combats and switches to a 3D model for the girls during the motivate minigames. The chibi style works well with the game and does make the journey through hell less scary and more of an adventure. The models of the girls are more fluid this time around and make them feel more alive and unique with each girl having a certain way they move around the dungeons.

The soundtrack to the game is nice to the ears but overall doesn’t do anything to make it stand out and most of the tracks are easily forgotten. Party Favors decides to do the same as Invite Only with using its original Japanese voices and putting in English subtitles, though you don’t need to speak Japanese to hear that the voice actors did an amazing job portraying the girls personalities.

Though Party Favors doesn’t offer different difficulty settings, it does well in making sure the player isn’t rushing through the game.The bosses in the game do put up a challenge, and while there is some grinding beforehand it never grows dull. With a total of fourteen endings along with a bonus “true Hell” ending; providing the player with fifteen in all. There is tons of room for replayability with this game and being able to go back and see all the little hints the game drops is really cool in its own regard. 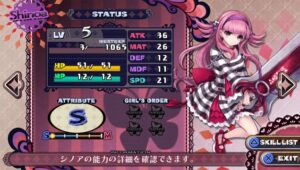 Criminal Girls 2: Party Favors, does what it promised. It takes what was good about Invite Only, and makes it better with adding more ways to play and a better story to follow. Party Favors is a great dungeon crawler with unique aspects that does well to separate itself from other rpgs on the PS Vita and is a great addition to add to your PS Vita library.

This review is based on a review copy provided by Nippon Ichi Software and NIS America.