Deathloop Guide: The Complete Weapons List and the Best Ones

All of the weapons you can find in the Isle of Blackreef. 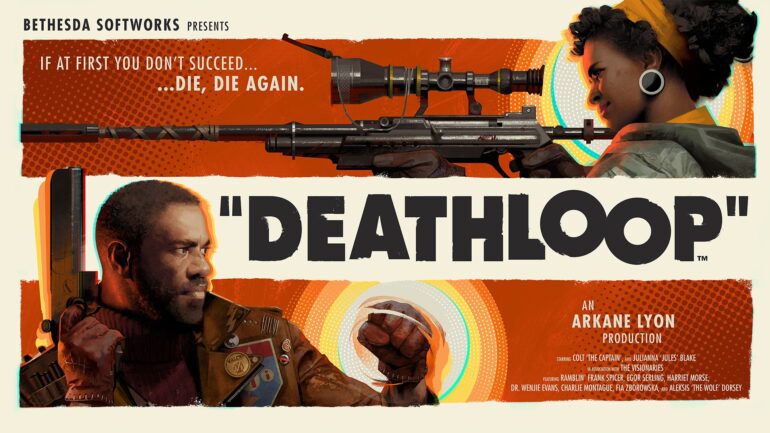 Deathloop has a good line of weapons to shoot your enemies called Visionaries. It ranges from handguns to fancy sniper rifles, giving you many creative ways to kill. Here is a complete list of Deathloop weapons that you can find in the Isle of Blackreef.

Deathloop Guide: The Complete Weapons List and the Best Ones

Deathloop weapons have five rarities, which are grey, green, blue, purple, and gold. Each color has its strengths and advantages.

Perks are very advantageous in combat like auto-tagging enemies when you shoot them the first time, more damage to tagged enemies, or giving them the silence perk.

The gold weapons are the rarest of them all with perks, 3 Trinket slots, and most of all, unique abilities that no other rarities and weapons have. It will be unique to that certain weapon type only. These are usually acquired via a side quest.

The LIMP-10 submachine gun can be found everywhere and is the first weapon you get when you wake up at the start. It uses the small-caliber ammo and you can find other LIMP-10 guns everywhere. It has a lot of recoil, but it does the job with a good rate of fire. It can also jam easily, so be careful. The best Trinket to use is the Shock Absorber, which does the job of absorbing all of that annoying recoil. You can dual wield this too if you need to spray a lot of bullets, or you want to have a melee weapon or a tool on your other hand.

The PT-6 Spiker is a handgun that can be found anywhere in the game and is easily one of the best due to its perk, a silencer. Use this for stealth kills with a headshot on a Visionary to quickly reduce numbers without anyone noticing you. Once a fire breaks out though, you might want to change your weapon of choice afterward because the Spiker is bad for it. The best Trinket for it would be the Lightning Strike for increased full-damage range and the Sure Shot for increased accuracy. It uses nails as ammo and can be dual-wielded.

This is surprisingly one of the powerful weapons in Deathloop. It is a revolver-like hand cannon that is loud and lots of firepower. It uses a large caliber ammo and the best part can be dual-wielded. The best weapon to use with too many enemies to fight. Use the Double Trouble Character Trinket to increase accuracy when dual wielding this bad boy. These can be found everywhere, but there are purple versions that can be found at Karl’s Bay where Harriet Morse is at.

The basic handgun you can get in Deathloop and a semi-automatic. It uses the small-caliber ammo and can be dual-wielded. The best trinkets to use are the Lightning Strike for increased full-damage range, the Sure shot for increase accuracy, and the Hipster for increased accuracy shooting from the hip. No need to aim, just shoot right away.

The Rapier is the most basic sniper rifle in Deathloop. It is very accurate and powerful especially from a distance, but has one disadvantage: it only shoots once then it needs to reload. To make it worse, the reload animation sequence is super slow. To make up for that, use the Trinket Speedloader for faster reload speed. Also, use the Big Box for increased magazine size. This gun uses Large Caliber ammo, but cannot be dual-wielded, which makes sense. This can also be found anywhere.

The Vopat Trencher is a shotgun that can be found anywhere on Blackreef Island. It has a low rate of fire since it is a pump shotgun, low reload speed, but it is widespread and best for middle to short-range fights. It uses shell ammo. The best trinkets to use are Speedloader for increased reload speed, Big Box for increased magazine size, and Lightning Strike for increased full-damage range.

The MG-1 Pepper Mill is the biggest, loudest machine gun you can find in Deathloop. It uses a small-caliber ammo (surprisingly) and can be found everywhere. It has a slow reload and problematic recoil, which needs a Trinket to reduce that, which is the Absorber. Also use the Speedloader for increased reload speed and the Big Box for increased magazine size. There is a good chance to get a purple rarity version in the Heckin’ Good Plan Arsenal Lead, which is at Karl’s Bay in the afternoon.

The Strelak 50-50 semi-automatic shotgun can be found anywhere in the game. It has a slow reload speed, but it has a really quick fire rate. It is best for close-up fights against Visionaries and other boss battles that might get ugly. It is best to use the Speedloader for faster reload speed, Big Box for the increased magazine size, and Hailfire for increasing the already fast rate of fire. No, it cannot be dual-wielded and uses shell ammo.

Now we are entering the Gold Rarity of Weapons that will need a bit of work to acquire. Check them out here.

The Strelak Verso is a pair of handguns that can transform into a three-round burst submachine gun, which is awesome in that aspect. You can either go with the double wield handguns or just use the machine gun in firefights. This can be found in the In This Together Arsenal Lead in The Complex at noon. The best Trinkets to use are Double Trouble Character Trinket for increased accuracy while dual-wielding, the Pistolero Character Trinket for increased damage while dual-wielding, and the Shock Absorber for reduced recoil.

The Heritage Gun is another type of transformable weapon in Deathloop. It is a shotgun that can turn into a rifle, which can be an all-rounder for all ranges. It uses shell ammo even in rifle mode and the best Trinkets to use are the Speedloader for increased reload speed and Sure Shot for increased accuracy. This can be found in the Super Shifty Arsenal Lead in Karl’s Bay in the evening.

The Sepulchra Breteira is a cool sniper rifle that can only shoot once per reload, but can do it at very long distances where you are in a safe spot. It can be acquired in the Keep On Giving Arsenal Led in Updaam in the afternoon. It uses the large caliber ammo and cannot be dual-wielded. The best Trinkets to use are Speedloader for increased reloading speed, Big Box for increased magazine size, and Hailfire for increased rate of fire.

The Constancy Automatic is a gun that can be looted from Frank during The Ballad of Ramblin’ Frank mission. This has the best unique ability, which can fire and reload at the same time. It has a downside, which makes you forget your stock of bullets. It can easily empty your magazines if you are not careful. It has a really strong recoil, but the Shock Absorber Trinket can help with that.

These are all of the Deathloop weapons you can find in the Isle of Blackreef. Check out our other guides like the Updaam Combination Location Guide, answering questions like will it have multiplayer and crossplay on PS5 and PC, and will it ever come to PS4.