Just who are these new idols? 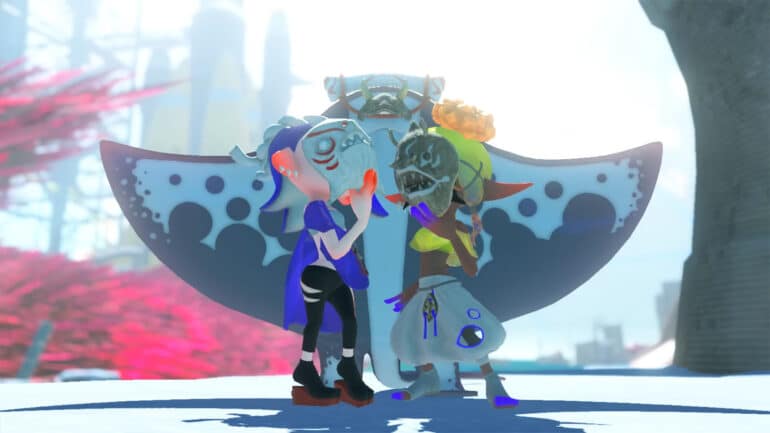 With Splatoon 3 coming up in the horizon, the newest idol group known as Deep Cut were introduced as they will be updating players on on what’s new and what’s hot in Splatsville. We will get to take a closer look at each member of this eccentric trio.

As with every previous Splatoon game, idol groups were introduced as the games’ mascots to keep things lively with players, as well as to introduce and host various in-game events. Things have been changed a bit in this third game as players are now introduced to an idol trio who call themselves as the Deep Cut.

The Deep Cut is made up of three individuals who come from different schools of traditional dances, and are also known in Splatsville as the undefeatable trio. Their dance style and theme is the traditional song and dance mashed up with modern pop, and they often perform with a matsuri or a Japanese festival vibe.

Apart from performing, they are also the hosts of the news program known as the Anarchy Splatcast where they provide information about the events happening in Splatsville, as well as details about the battle stages. They are also the ones hosting the Splatfest and they update players on the leaderboards.

Shiver is the blue octoling of the trio and is known as the heir of the Shark-style tradition of dancing. She has a chill, yet steadfast character and highly values strength. Because of this, Shiver was seen siding with the Rock team in the recent Splatfest.

Frye is the yellow inkling of the trio and is a member of the family who are practitioners of the Eel-style tradition of dancing. She has a perky and lively character who wants to do anything with high energy. Frye chose to side with the Paper team in the recent Splatfest as she believes that lots of devastating things can be done depending on how paper is folded.

Big Man is the manta ray of the trio and is the head of the traditional dance school. He may not be the best tool in the shed, but he has a fighting attitude and he never backs down. Big Man sided with the Scissors team in the recent Splatfest.

We can expect to see more of this idol group once Splatoon 3 comes out on September 9 on the Nintendo Switch.

In the mean time, check out the Splatoon 3 Direct from the official Nintendo YouTube Channel if you haven’t seen it yet: