There's never been a better time to rock and stone! 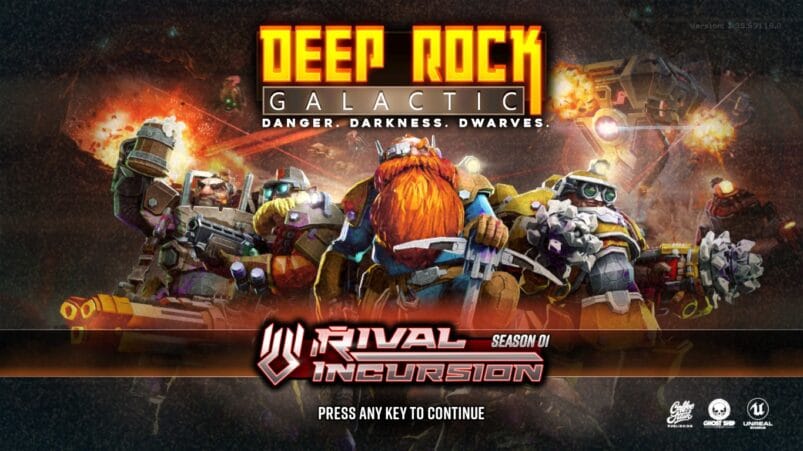 I’ve been playing Deep Rock Galactic for nearly a year now. I don’t remember the exact date anymore, but it’s sometime shortly after Ghost Ship added Dotty and Escort missions. And ever since then, I’ve been having all sorts of fun playing with friends. But since the addition of Rival Incursion, I have been reminded of how fun it was grinding for content in Deep Rock Galactic actually was.

If you haven’t heard yet, Deed Rock Galactic just received its largest content update to date. For starters, update 35 introduced seasons into DRG. It’s something for players to work towards, who also happen to be well past the game’s current line up of weapon upgrade licenses and pick axe skins. The best part though, is that the season tracks will carry over into succeeding seasons, meaning content won’t be locked after the season ends.

The title for this season is Rival Incursion. The developers are now theming their updates to help build up the world of Hoxxes 4 and dwarves who mine it for resources. As far as I can tell, there hasn’t been much story telling in Deep Rock. All I know is that I’m a miner and I dislike management. But now, a rival corporation is staking an illegal claim, and that doesn’t sit well with me. The fact that I’m hyped about corporate sabotage says something about my time with the company.

I’ve done roughly half a dozen Industrial Sabotage missions so far, most of which were carried out with friends.

The start of the missions are usually slow. Clear the path to the power stations, shoot every bug and turret that gets in your way, and set up Hacksy’s hacking pod. In some areas, the tricky positioning of the pod calls for some creative solutions. Of course, it doesn’t always go to plan. Unlike a refining mission, should a detonator decide to grace us with its presence, the connection’s guaranteed to be lost. Hilarity ensures until your team realizes that the power station is 30 meters above the hacking pod and getting back up is more trouble than it’s worth.

After taking the down the two power stations, we make our way to the Data Vault. And that’s where the… fun really begins. I don’t usually compare sections of shooters to Destiny 2 raids, but taking down the guardian of the Vault is like taking down a raid boss. Not strictly speaking, mind you. The game is not telling us to grab tokens or go specific spots. (not yet anyways.) But stages like the force fields and teleporting mines give off that vibe. Let’s just say that It’s an intense fight from start to finish. With a little bit of dancing in between. (Inside joke among friends.)

By the end of the encounter though, you’ll have forgotten the slow build up leading up to the fight. Taking down that inverted pyramid was that much fun.

Full disclosure time – I’ve only unlocked the plasma carbine and the hurricane missile launcher. I like both of them as alternatives in terms of changing things up, they’re decent enough weapons. I fully intend on ranking up the other classes to get the other weapons. I just haven’t had a good enough reason to do so until now.

If you know the L-Star from Apex Legends, then know that the plasma carbine is mini L-Star. In terms of it being in the game, I’d say it has everything I’ve hoped for when it comes to the Scout’s run-and-gun playstyle. The assault rifle just wasn’t up to task. (I’m sorry!) As for the Hurricane… well, it’s a more ammo efficient minigun. It’s good at clearing ads, killing bosses, and won’t suddenly run out of ammo when you need it the most. It’s perfect. A little too perfect.

Now, my other friends have unlocked the corrosive sludge pump and the LOK-1 smart rifle. According to them, the sludge cannon is good for area denial. I do like watching bugs melt away, makes me chuckle every time it happens. And while the LOK-1 is the most interesting weapon of the lot, it eats away ammo like nobody’s business. And quoting my friend, “it is the Hummer of the whole arsenal.” We’re currently testing out overclocks to see if we can make it better.

It’s been a week since Season 01: Rival Incursion started and I’m steadily been making my way through the cosmetics tree. The pacing’s been great, from what I can tell. It wouldn’t take much for me to get all 100 levels, though I have no interest in burning myself out just for the sake of another battle pass. But who knows? I’ve stuck around doing weekly core hunts and deep dives for this long, I see no reason why I shouldn’t just complete the inaugural season as soon as possible.

As for my wishlist for next season, I’d like to have another secondary gun in the line up. Might be a no-brainer, or it could take seasons to happen. I’d vastly prefer the former than the latter. Also, I’d like to more options for beers. Barley Bulbs are turning into a rarity at this point. Having a use for the other ingredients can help with that. (oh, and more fun distractions like the make shift soccer field, please.)

Deep Rock Galactic is in a very good place right now. This new content was exactly the infusion we, the players, have been hoping for for so long. I can’t wait to learn more about the dwarves in the next content update. Maybe we’ll finally get to see those blasted leaf loving elves! But even if that’s not the case, I hope the devs will continue making cosmetics and weapon skins. It’s pretty much the only thing that matters once you have all your overclocks in order. Well, that’s it for now.

Thanks for the awesome update, Ghost Ship Games.