Starting January 4th, PS plus is going to get some amazing games 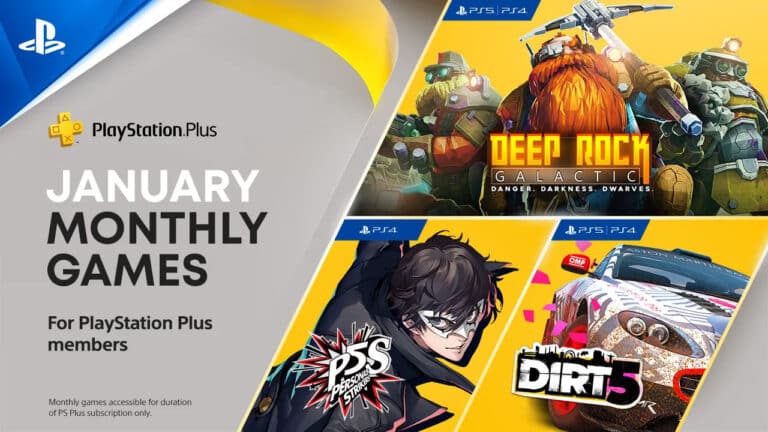 The PlayStation Plus Free Games for January 2022 has been announced by Sony Interactive Entertainment and confirmed the three games that’ll be part of it. The line-up inludes Persona 5 Strikers (PS4), Dirt 5 (PS4, PS5), and Deep Rock Galactic (PS4, PS5).

The PlayStation Plus Free Games for January 2022 will be available starting from Tuesday January 4th, 2022 through to Tuesday, February 1st, 2022.

Since no new game releases have been scheduled for January 4th, we don’t expect a Day One release from PlayStation Plus.

All January 2022 PlayStation Plus Free Games

Sony has now confirmed that all of these titles will be available on PS Plus in less than a week coming January 2022.

Dirt 5 and Deep Rock Galactic are available on both the PlayStation 5 and PlayStation 4, respectively. Persona 5 Strikers, on the other hand, is a PS4 exclusive, but is still playable on PS5.

Overall, this has been one of the best months for PlayStation Plus in a long time. Not only are these games from a wide range of genres, so there is something for everyone, but the majority of them are also relatively new releases. For those who have remained PS Plus subscribers, the new year has started off well.

If you’re a PlayStation Plus subscriber, and want to learn more about each of the upcoming free games, please read the official descriptions attached below:

Jump into the stylish world of Persona in an all-new story featuring the Phantom Thieves as they embark on an epic road trip across Japan. A summer vacation with close friends takes a sudden turn as a distorted reality emerges, thrusting you in an epic tale as you strike back against the corruption overtaking cities. Dynamically control your team during explosive action combat as you reveal the truth and redeem the hearts of those imprisoned at the center of the crisis.

Check out our review of Persona 5 Strikers here.

Conquer stunning global routes and drive an iconic roster of cars in an amplified off-road racing experience. Let loose in the boldest off-road racing experience ever, with a star-studded Career, four-player split-screen, online multiplayer*, Playgrounds creator mode and more. Blaze a trail on global tracks, covering gravel, ice, snow and sand, with cars ranging from rally icons to trucks, to GT heroes. Race on over 70 routes across 10 global locations – from  New York’s frozen East River, to the glimmer of Norway’s Northern Lights.

We also have a review of Dirt 5 here.

Deep Rock Galactic is a 1-4 player* co-op FPS featuring badass space Dwarves, 100% destructible environments, procedurally-generated caves, and endless hordes of alien monsters. Work together as a team to dig, explore, and fight your way through a massive cave system filled with hordes of deadly enemies and valuable resources. You will need to rely on your teammates if you want to survive the most hostile cave systems in the galaxy.

You can read about our thoughts about Deep Rock Galactic’s first season: Rival Incursion here.

How to claim and download PS Plus Games For Free

A few simple steps must be followed if you want to claim these games as part of the January 2022 lineup.

Remember, active membership is required to access games and other PS Plus features and benefits. Technically the free games are not totally “free”. Think of it as a glorified “rental” program, where you only lose access to the games you’ve claimed for free if your subscription ends.

It looks like the Janurary 2022 PS Plus leaks were correct. Data miners had it correct, and PS Plus members can look forward to a few intriguing titles in January 2022 and beyond.