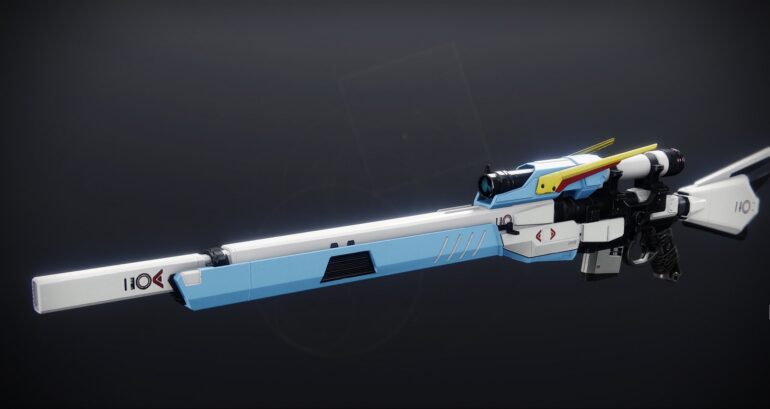 The Mechabre Sniper Rifle is the event exclusive weapon introduced in Festival of the Lost 2022. It is an Arc elemental Sniper Rifle with an aggressive frame. It does high amounts of damage on unshielded enemies but comes at the cost of high recoil and a three bullet magazine. It’s distinguished look is what separates it from other energy snipers. If you hadn’t already known this was a Destiny 2 weapon, you’d swear it was a sniper skin for the GM Sniper II from Gundam Evolution. It is also worth noting that this gun sounds like a beam rifle both when it fires a round and reloading.

Its Origin Trait is the called “Search Party”. Recently introduced as of this event, it grants the weapon faster aim-down sight speed and movement while aiming down sights when no allies are near. My earliest impressions of this weapon makes it an ideal dueling in PvP lobbies as a solo player.

As discovered by YouTuber Aztecross, Search Party activates the moment your allies go further than 15 meters away from you. Which is good because you can be in a team of 6 Guardians and have Search Party up almost the entire time. Unless you have someone shadowing your every move.

I’m actually impressed that there are no “bad” weapon perks for this gun. Hell, even something like Swashbuckler can work if you build exclusively into that playstyle.

A reliable combination taking advantage of the Vorpal Weapon’s solid damage buff and a precision perk that rewards you for skillful play.

Clown Cartridge on its own is very good. With this perk on you get guaranteed extra bullets in the chamber without having to rely on precision shots to make happen. Add Vorpal Weapon to the mix and you have a solid damage option in the energy slot.

If your playstyle leans more on swapping weapons more often, you can try this perk combination. You can pour all three shots in rapid succession buffed by Vorpal Weapon, swap out to another hard hitting primary, wait a few seconds, and voila fully loaded sniper rifle. Rinse and repeat for as long as necessary.

In case you don’t to use Vorpal Weapon for your gun. Triple Tap takes effect after you’ve shot your third round. When this happens High Impact Reserves kicks in just as the bullet is added to your magazine. It’s real deadly if you make all your shots. Which isn’t all that hard in PvE.

You can make Voltshot work with this gun. It’ll be a slower, bulkier version of Brigand’s Law but sometimes it’s all about the spectacle.

This is the roll players get when they complete the “Gone But Not Forgotten” quest line. It’s the closest thing to a PvP god roll for this weapon. The snappiness of the quick scope plus the range and accuracy from the first shot makes it a deadly combination in the Crucible. I understand why Bungie wanted everyone to have it. So no one can be that special.

This roll is good if you want to be in that combat sniper role. The reduced flinched helps when dueling against other Guardians. But you have to make that shot count if want to walk away from the fight as the victor. And if you miss, duck back into cover. Quick.

You can also make an argument for this combination because you start Trials matches with a single sniper round in the chamber. Coupled with the reduced flinched No Distractions brings and you have something that can potentially drop Guardians in the opening seconds of a round.

In general, no matter what you have in your 3rd perk slot, you’ve got to have Opening Shot in the 4th column to make it a gun worthy of the Crucible. But feel free to experiment as you wish.

The PvP god roll for this weapon is most likely going to be Hammer-Forged Rifling with Accurized Rounds. Along with any of the perk combinations that were listed above.

For PvE, this gun’s god roll will either have Extended Mag or Appended Mag in the 2nd column. Your barrel is completely up to personal preference. I’d personally go for Fluted Barrel for that improved handling speed and stability but going for range isn’t bad either. The goal here is to have at least 5 rounds in the magazine. (Or more depending if you have backup mag as your weapon mod.) With the right combinations, you can have as much as 6 rounds in the magazine though not all the time.

For the Masterwork, you’ll either want Handling or Range depending on your playstyle. For long range guns, I’d usually go for range but the Origin Trait and perk pool makes it possible to run something that can quick scope and hot swap at the same time.

And that’s it for our Mechabre weapon guide. Hopefully you can make use of this in your search for your own personal god roll.

Check our other articles covering Festival of the Lost 2022:

Also, check out this video from YouTuber xHOUNDISHx where he talks about farming some event weapons you should be looking for.