The carnage you bring to mankind is quite satisfying. 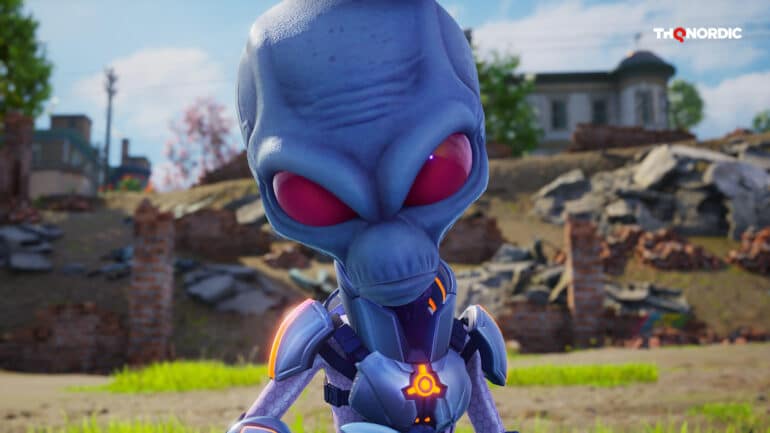 When the first remake of Destroy All Humans! stormed the last generation of consoles, Black Forest Games made the cult classic the remake it finally deserved.

I’ve had fun playing as Cryptosporidium again, zapping everyone in the street with my Zap-O-Matic, melting the US Army and agents of the secret Majestic down to its bones with my saucer’s death ray, and infiltrating enemy bases as one of their own with the Holobob. The story isn’t on the same level as The Last of Us, nor it’s as good as Assassin’s Creed, but the toilet humor, double-meaning jokes, and entertaining gameplay just make Destroy All Humans! crazy fun.

Destroy All Humans 2! Reprobed may not be for those people who expect the gameplay to be mesmerizing or as cinematic as those you experience from titles like God of War or Marvel’s Spider-Man. No, Destroy All Humans! ditches serious plot twists and gameplay to something crazier and more chaotic in a sandbox. You hold a ton of tools to destroy mankind — from electrocuting them with your Zap-O-Matic or invading their bodies with the Anal Probe tool. You even get to throw your enemies to the sky with Crypto’s telekinesis ability and even read their minds to know what people are thinking.

Your objectives can be repetitive at times. You either eliminate a specific target that acts like a boss fight, destroy certain buildings or factories, and even hold off enemies for a certain amount of time. These may sound boring, but the combinations you can do with your arsenal and abilities make the entire experience unique, unlike the 2006 original release where you’re limited on what you can do. Now, you can use your telekinesis on enemies while zapping others at the same time; even use the infamous Anal Probe and switch to the Disintegrator Ray without interfering with the rectal penetration.

It’s a no-brainer alien chaos simulator that just hands you over the tool for mass destruction and enjoy yourselves.

Reprobed is not just simply a 1:1 remake of the original 2006 cult classic, rather, Black Forest Games made a few positive creative decisions that made Reprobed somewhat still similar in terms of narrative but different in view. What do I mean by that? Cutscenes in Reprobed are completely distinct from the original, and a lot more entertaining I must say while retaining 99% of the dialogue.

If you remember playing the original mission in finding Coyote Bongwater, a middle-aged man who works for the Russkies, you’ll notice in the original the KGB agents tried to shoot our Furon main character before he jumped out of the building, this time in Reprobed, the enemies tried to throw a grenade at Crypto but instead threw it back at the KGB with his telekinesis ability.

Another change I’ve come to like is when you acquire new weapons. Black Forest Games made sure Reprobed showcases the new bombastic armaments you unlock in slow-motion cutscenes where the weapons are deployed; they’re classy, cinematic, cool, and fulfilling getting them guns to destroy humanity.

Reprobed‘s visuals are nothing but gorgeous. The level of detail from Crypto’s bobbly head to the cartoonish style of its NPCs, small details like their strand of hair, and overall clarity make the game look mighty impressive. You’ll even fall in love with the re-model of the charismatic and sexy Natalya Ivanova.

Where Reprobed also shines is the enthralling vistas. You get to appreciate the massive visual upgrade over the original, especially when you unlock the Takoshima location – the environment gushing with Sakura trees is a sight to behold, it’s a refreshing scene.

I even spent a few hours doing in-game photography with Reprobed‘s own Photo Mode, especially in combat and I’ve managed to capture a lot of funny moments and epic ones. It’s worth noting that if you love photo modes, you’ll love them in Reprobed too.

If you’re a music junkie like me, Reprobed is filled with a lot of late ’60s music you’ll fall in love with. The classic tunes put your ears in a way that you’ll head starts to nod synchronously with the beat. Happened to me a few times after unlocking some of the songs to play in the game’s jukebox from the main menu.

Like the music tracks, your flying saucer can be aesthetically customized by changing its skin. There are a couple of Crypto and saucer skins available from the get-go thanks to the Dressed to Skill edition, and some of the skins can be unlocked by completing specific missions. I definitely praise Black Forest Games for including new customization features, making me fly my ship with hippie designs or one that came straight from Furon hell.

Reprobed isn’t all too perfect when we talk about the game’s overall polish. Some glitches are fun like when you see NPCs and vehicles just go out of their pathway and head straight through a building — it wouldn’t be Destroy All Humans! without them; but there was one mission glitch that I had to restart three times because the game didn’t seem to track the kills I needed. This was freeing the Shama Llama from the cops. The mission had me take out a specific number of cops before I could talk to Llama, but even though I killed more than I was asked for I still wasn’t able to interact with him.

You’ll also immediately notice screen-tearing during fast-moving cutscenes as if vertical sync is absent from the game, plus assets load up after switching scenes are also obvious.

Destroy All Humans 2! Reprobed may not be the perfect polished game out there, but the persistent open world you get to explore and the chaos you bring to mankind are nothing but exquisite and entertaining. If it wasn’t for the mission glitch and minor polish issues, I would have given the game an 11/10! I had fun with Reprobed and will definitely love to see a much more fitting sequel than Big Willy Unleashed and Path of the Furon from Black Forest Games. 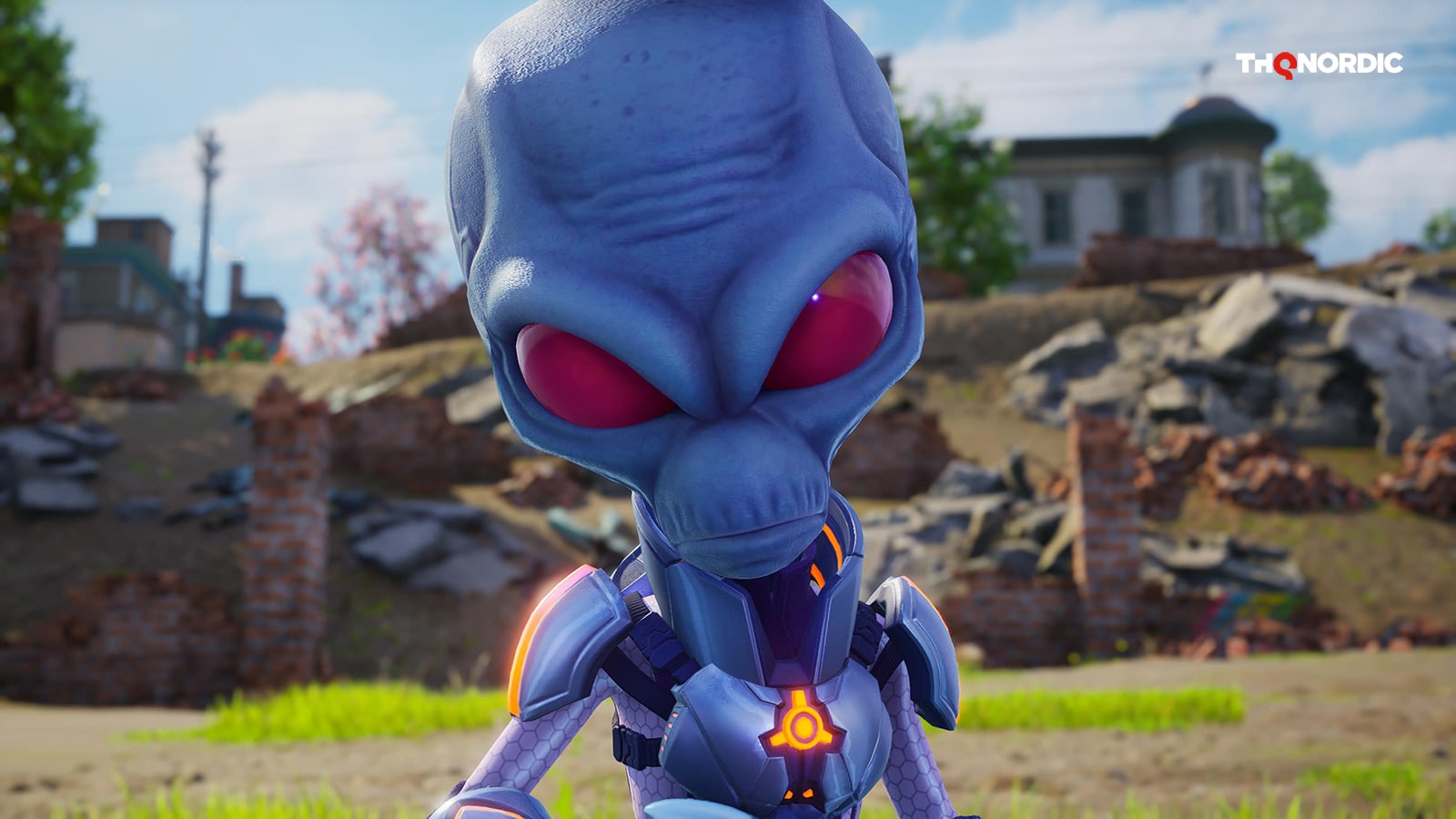 Destroy All Humans 2 Reprobed – Review
Score Definition
Almost perfect if not for the nitty-gritty. If it’s quite there but not enough to push the boundaries, it’s still an awesome game.
Pros
Visually impressive
Creativeness in combat
Natalya Ivanova
Weapons of mass destruction
Photo Mode
The huge library of unlockable '60s music tracks
Cons
Minor glitches in missions
9
Excellent