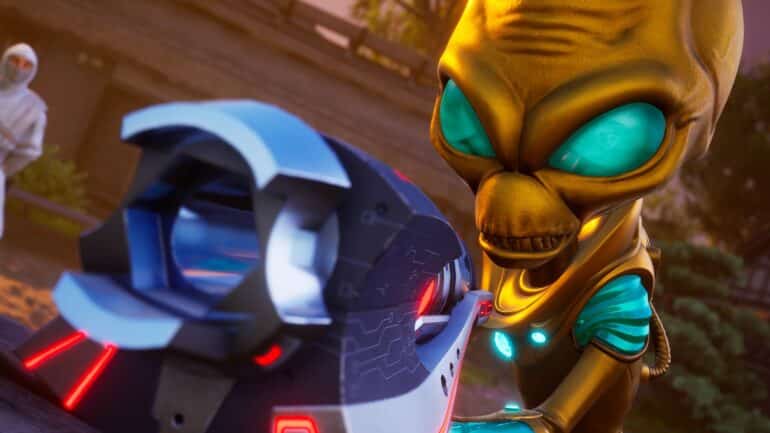 While the Earth is technically under the boot of our Furon overlords, there is always a reason to have the latest and deadliest arsenal at hand. Just in case someone decides to destroy your mothership with a nuclear strike.

The list of Weapons in Destroy All Humans 2 Reprobed are far more down-to-Earth compared to wackier weapons from other open-world games. But regardless, they do bring the pain, as this list guide will tell you in extreme detail on what they are and how to obtain each of them.

Electrocute the opposition into submission with bolts of electricity. They’ll be rendered stunned and unable to retaliate. The Zap-O-Matic does not require ammo. Its battery recharges on its own.

How to get the Zap-O-Matic: Available from the start of the game.

The lighting gun is a classic weapon in Destroy All Humans. It is capable of hitting zapping and stunning enemies to death. A more powerful version of this gun increases the number of targets you can chain with a single bolt of electricity. The rechargeable battery also means that finding ammo will not be an issue.

Confuse organic enemies with rays of love and force them to dance. Capitalize on enemy distraction – the dancing stops quickly if no new participants join the party.

Kick off a party by forcing a certain number of targets to dance simultaneously. The number of humans required to get the party started depends on the alertness level of the enemies. Starting a party also reenergizes Crypto’s current bodysnatched host.

How to get the Free Love weapon: Acquired at the start of the “Where Have All the Flower Children Gone?” mission.

Free Love is a non-lethal weapon. Shocker, I’m sure. It is used primarily to cover your tracks while you are in the middle of a “tactical retreat”. Those who succumb to the good vibes have no choice but to dance away. With enough people affected at once, you can get a whole party going.

Charge up the Dislocator and send enemies bouncing to their deaths. Tweak the disc’s trajectory to hit as many targets as possible. The Dislocator’s discs always return to the weapon’s magazine automatically.

How to get the Dislocator: Obtained during the “Furon Loathing in Bay City” mission.

Need something heavy moved away, and fast? Then the Dislocator is your one and only answer. When fully charged, the object (or person) the disc is attached to make it so that they are skipping at a high rate, ultimately getting destroyed in the process.

Blast enemies with the Disintegrator, a no-frills rapid fire projectile weapon. It may also occasionally set the opposition on fire.

How to get the Disintegrator Ray: Obtained in Bongwater’s Lair during the “The Alien Who Probed Me” mission.

Just as it says on the tin, the disintegrator ray is a simple yet effective weapon for removing flesh from bone. Nothing much else to say really.

Launch a projectile that enters the target’s rectum and destroys them from the inside. Time the release of the probe to land a critical hit. If the probe bursts out of the target before its energy has run out, it will automatically jump to another nearby target.

Wipe out whole city blocks with a Meteor Strike. Designate the target zone with the laser pointer and open a portal in the sky to the busiest parts of the Oort cloud. The laser’s range is limited. Careful positioning is recommended.

How to get the Meteor Strike: Obtained near the end of the “On Natalya’s Secret Service” mission.

Calling death from above has never been this easy. Like Thanos activating the space stone, Crypto is able to pull falling meteors from one world and drop them onto Earth. Destruction guaranteed.

Cause maximum mayhem with the Ion Detonator by lobbying timed, highly explosive grenades. Alternatively, detonate them early or toss them at foes with PK. The grenade won’t explode while levitated.

How to get the Ion Detonator: Acquired at the end of the “Revenge of the Ninja” mission.

The demo man’s grenade launcher has nothing on the ion detonator. The blast radius is massive and easily manipulated through telekinesis. If you want something to disappear in a blink of an eye, there are few options more reliable than the ion detonator.

Deploy Gatro-999, the infamous janitor-turned-combat bot. Once unleashed, Gastro will engage nearby targets at will. Focus Gastro’s attention on single targets continuously to unleash his full firepower.

How to get the Gastro Gun: Obtained during the “You Only Live 137 Times” mission.

It’s funny that we live in a video game age where satellite weapons are common, especially in third-person games. But like its distant cousin, Mr. Zurko, Gatro-999 states a few witty lines while shooting anyone in front of your line of sight.

Bait an ancient monster into eating enemies by marking them with grenades filled with a substance the Burrow Beast cannot resist. The beast will eat bystanders as well, but it prefers properly prepared prey. If the supply of accessible, sprayed targets disappears, it will eventually leave.

How to get the Burrow Beast: Obtained after collecting 30 Artifacts and completing the “The Coming of Arkvoodle” side mission.

The very definition of a long side quest, the Burrow Beast is a long-term investment that requires you to go to multiple maps to collect artifacts in order to start a ritual. The reward for all this collecting is the ability to summon the underground creature from Tremors to terrorize Crypto’s enemies.

You can pre-order Destroy All Humans 2 Reprobed before the game releases on August 30th on PC (via Steam) and current-gen consoles.