Learn all of the character classes of the game here. 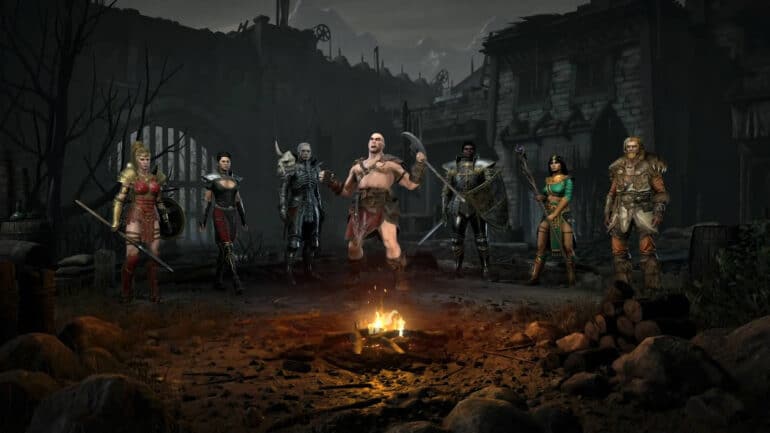 Here is a guide that details all of the classes that are available to choose from in Diablo II: Resurrected.

The Barbarian comes from one of the many tribes that live outside civilization, the Northern Steppes deep within the great mountain Arreat. He has a big frame, usually uses axes and two handed weapons in battles, and believes in the shamanistic powers of animals. He also uses totems that represent animal spirits that buff him with supernatural strengths and abilities.

This class is the improvement of the Warrior class from the original Diablo game. He can wield two one-handed weapons at the same time and can even do a quick attack for both.

Here is the Barbarian’s initial stats and figures:

Since the Barbarian is a melee specialist, it is best to bring along a host of health potions and always check on their health. Upgrading the leap skill is also a big help, which allows him to get away from opponents that might overwhelm him. He has the highest amount of stamina of all classes, so he is the best one to survive after making a strategic retreat. Better to survive and fight another day than die and lose all-powerful weapons and equipment.

The Barbarian has Combat Skills and to improve that, a tree dedicated for it is available. All are level six and below and are the only section of any tree that does not need any prerequisites. You can use your first skill point on any of the six masteries available right away. All of them are passives as well, so no need to activate.

The first few Acts might not pose any threat to the Barbarian, but he will need magic resistances later on since enemies are getting stronger with magic. He will need to have armor that can withstand powerful spells that are used by spell-caster demons.

The only long-ranged ability that the Barbarian can use is the Double Throw and the only way to improve on this is the Throwing Mastery passive. The Character Level (Clvl) must be 12 in order to improve this.

Dual-wielding can have problems too if you are not careful. It will make the Barbarian vulnerable since he has no shields to protect him and his accuracy is quite bad at the start. Use the warcry Shout to compensate.

The Amazon is a powerful woman warrior that belongs to the nomadic bands that roam the plains near the South Sea. She is a master of the bow, the spear, and other throwing weapons, as well as hand-to-hand combat.

While she reminds you of the Rogue, the Amazon can use other weapons aside from the bow like javelins, spears, and a bit of magic.

The Amazon is basically the female Warrior and uses several weapons including throwing ones like the spear. Her main weapon is usually the ranged-type ones like the bow or the javelin and can enhance these attacks by imbuing it with magical elements like cold, lightning, and poison.

The skills of the Amazons can enhance the proficiency of her favored weapons like Penetrate and Pierce, which increases her chance to hit and the ability to strike more than one monster. She has six Passive skills and all of them are very useful to most Amazon builds.

At the start, the Amazon will have a stack of javelins. There are many types of these weapons, but it will need higher stats to wield them like strength dexterity.

The Amazon has three defensive skills, which are Dodge, Avoid, and Evade. These are very helpful skills that will make them not get hit constantly by enemies. Amazons who use bows would like to have these skills right away since they do not have shields to protect them. She can summon Decoy and Valkyrie as her minions. One can tank for her while the other can help her in damaging enemies.

The Necromancer class is a different kind of sorcerer who has spells that can raise the dead and can summon golems for battle. They are the misunderstood Priests of Rathma who use their deathly powers against the forces of darkness. They come from the far Eastern Jungles and reside in a vast underground city located deep inside.

These powers might have already been acquired by the demons a long time ago, the Necromancer class is the only type of human that can handle these powers. They have been following the teachings of Rathma and have also done tons of research and physical experimentation in order to achieve these incredible spells that border life and death.

The Necromancers have the ability to reanimate corpses of various types of monsters, demons, and even humans. The dead usually release spiritual energies that wander in the mortal real and with those, the Necromancer can use them to give the dead a physical form.

Curses, Poison and Bone, and Summoning are the main skills that the Necromancer can learn throughout his adventures. He can either focus on either branch or make a variety of them depending on the character build the player decides on.

The Sorceress is the upgrade of the Sorcerer in the original game and her main focus in elemental magic. She is said to have gained powers even though she came from the Mage-Clans of the East that are controlled by males. She is an expert in mystical creation and even though she lacks the skills of hand-to-hand combat, she compensates it with combative magic for both offense and defense.

This particular Sorceress is a member of the female mage clan of Zann Esu, one of the oldest of the ancient clans. No one knows where their community is located now, but have disappeared somewhere in the Eastern Jungles. They have appeared in the past, but only to recruit members. They were looking for a certain seven year old girl from the families living across Sanctuary. A few of those select girls were visited the second time and were recruited while their families gained riches. The Sorceress is believed to be one of those girls that got recruited.

The Sorceress possesses a lot of elemental magical spells and can unlock more powerful ones along the way. They have no other physical skills, but they can handle their own with magic alone and can even increase their physical and magical resistances with their defensive spells. She might need a party member that can help her win against powerful bosses though.

The Assassin is part of the Order of Mage Slayers that was formed after the Vizjerei survived a tragedy. Their true purpose is to watch for rogue magi that could become corrupted by the forces of Evil. They are trained in the abilities that were not likely corrupt them. The magic know little of them, which works for them as they work as a rumor and myth to the world.

The Assassins do not use magical spells, but use enchanted equipment, weapons, and items that would mimic those powers. They also use the natural abilities of the human body where the mind and physical body are the main weapons.

There are skill trees that the Assassins can train on. These are the Martial Arts, Shadow Disciplines, and Traps. Each tree focuses on a variety of skills that depend on the physical body, shadow arts, and the many traps that they can lay during combat. The third skill tree allows them to use elemental magic without actually using the spells. The traps are the ones that will automatically release those elemental attacks on enemies that get in range. Very powerful against crowds of enemies.

The Assassins mainly use metal blades and claws that are strapped on their wrists. These are expertly incorporated into their martial arts and since they are on both hands, they deliver a devastating double attack on demons. They can also easily open locked treasure chests without breaking a sweat.

The Paladin is part of the Knights of Westmarch who have defeated the mighty armies of Leoric. They are pure of heart and follows closely the teachings of the Zakarum, the Religion of Light. A warrior that mainly uses the shield and fights for what he believes is right. He can bestow blessings to his allies and deal intense damage to his foes.

The Paladin is the Protector of the Word, members of the Church of Zakarum who were created after their initial launch of spreading the visions of Akarat failed miserably. Instead of the meek priests, these are warriors who can defend themselves against the harshness of the world like bandits, monsters, weather, and more. They also accompany and safeguard the missionaries on certain missions that the church would dispatch.

The High Heavens have blessed the Paladins with holy magic that they can use against the forces of Evil. They must maintain ordered lives though as a result and constantly upholding the cause of Virtue and Light. They must not be tempted to worldly pleasures because they might get deceived by demons that are disguising themselves as heavenly beings.

The Druid come from the northern forest of Scosglen and have developed their own type of magic independently from the eastern mage clans. They are warrior-kings of their tribes and live with the forests. They are masters of the natural world and can control living creatures and the very forces of nature.

The Druid can change their form into of an animal like a wolf or a bear. They can also summon creatures that can help them in their fight against Evil forces. They control both Elemental and Prime magic. The Elemental powers they can control are fire, earth, and wind. Prime magic allows them to command beasts and plants, summon ravens, wolves, vines, and natural spirits.

The druid has more combat skills compared to the Necromancer or Sorceress with his shape-shifting abilities. While it is limited, the transformation allows him to deal devastating damage against numerous enemies and can even handle bosses if needed. He also uses unique equipment and can deal physical damage if needed with powerful weapons.

And this concludes our Diablo 2 all classes ultimate guide.