Here's an easy build to follow, the Blizzball Sorceress build. 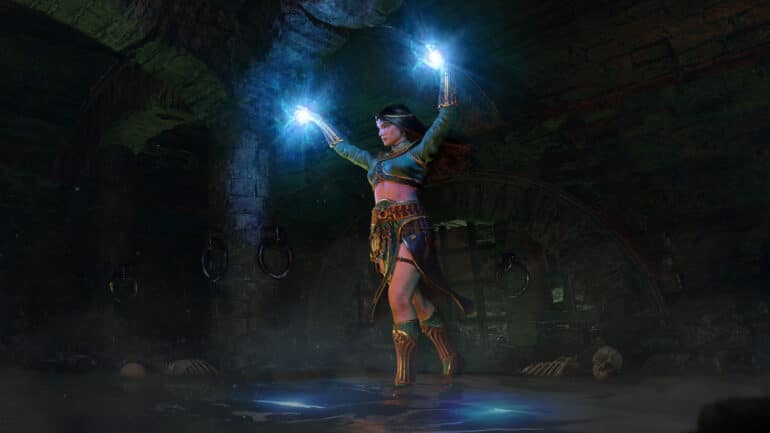 In Diablo 2 Resurrected, the Sorceress is quite vulnerable especially to physical attacks but can be one of the most powerful classes if you just have the right build for it. There are a lot of builds to follow, but there are a few of them that offers great offensive and defensive skills to take advantage of your first playthrough.

Here is the Diablo 2 Resurrected Sorceress Build called Blizzballfor you to learn from.

Focus on Cold with a Side of Fire

With the Sorceress Blizzball build, your primary focus will be on the Cold skills rather than its opposite, the Fire skills. While the majority of your skills will be Cold ones, there will be a few Fire skills that you need to max out in order to use them against enemies that are immune to your Cold spells. There are only about three skills to use points on while the others you have to max out as much as possible.

This build is made by Luhkoh who has painstakingly calculated all of the skills needed to make this a possibility. It is a pretty great Cold build to follow and it is not completely on the Cold skill tree and is flexible with Fire skills that can be used in emergencies in case the bosses are immune to Cold spells.

Here is a checklist of skills that you can put all of your skill points on:

From the helmet to what the mercenary should wear, here are the recommended gear to acquire for the Blizzball build:

The helmet should be the Lore Runeword, Rockstopper, Peasant Crown, or any socketed helm with ral, thul, and ort for resistances. The amulet should be a rare, magic, or crafted with faster casting rate skill, resistances, and other skills that can be useful to the Sorceress.

For the weapons, it is recommended to use the Wizard Spike, Spectral Shard, Suicide Branch, or any rare or magic orb with a faster casting rate, skills, and resistances. You can also use the Oculus, or Tal Rasha’s Lidless eye.

Armor that is recommended for use is the Skin of the Vipermagi or any armor close enough to its stats with sockets embedded with Smoke runeword, Lionheart runeword, and Stealth runeword. For anyone using Shields for blocking, use the Moser’s Blessed Circle, Rhyme runeword bone shield, Whistan’s Guard, or Viscertuant. For just using the shield for its stats, just use the Moser’s Blessed Circle and Viscertuant with the Ancients Pledge runeword.

You can use rare rings with faster casting rate and resistances especially the Dwarf Star and Nagelring. Get a belt that is rare or just craft a caster belt with life, faster hit recovery, and resistances. You can go for the String of Ears, Nightsmoke, and Snowclash.

The Waterwalk is recommended for boots for its extra skills or just wear any rare boots with resistances. Use Charms with priority on resistances, life, faster hit recovery, and skills.

Now for your mercenary, let them use the Tal Rasha’s helm, Vampire Gaze, Crown of Thieves, crafted blood helm, Wormskull, or the Undead Crown. For armor, get any 3 slotted armor and use the following runewords: Treachery, Smoke, Lionheart, Stone, or Duress. You can also opt for Duriel’s Shell and Shaftstop. Use the Hone Sundan, Kelpie Snare, Bonehew, and Arioc’s Needle with Insight runeword or Obedience runeword.

The Sorceress Blizzball build focuses more on Vitality, with surprisingly nothing on Energy. For Strength, just put on enough points for you to wear the specific armor recommended. It is suggested that it could go up to 60+. For Dexterity, add points enough for a 50 percent block if your build is for blocking. For non-blocking builds, use at least up to 35 points, but if not just leave this alone.

It is highly recommended that you do not respect your Sorceress build once you start and only do it if you mess up in the build.

This is a pretty decent early playthrough build to use and can improve upon it at latter difficulties. Focus more on Cold spells and enough Fire spells to kill Cold immune enemies and bosses.

If you want to choose the Necromancer class and want to follow an awesome build, check the Fishymancer Build here. If you want to know what the level cap of the remaster has, check this article here.