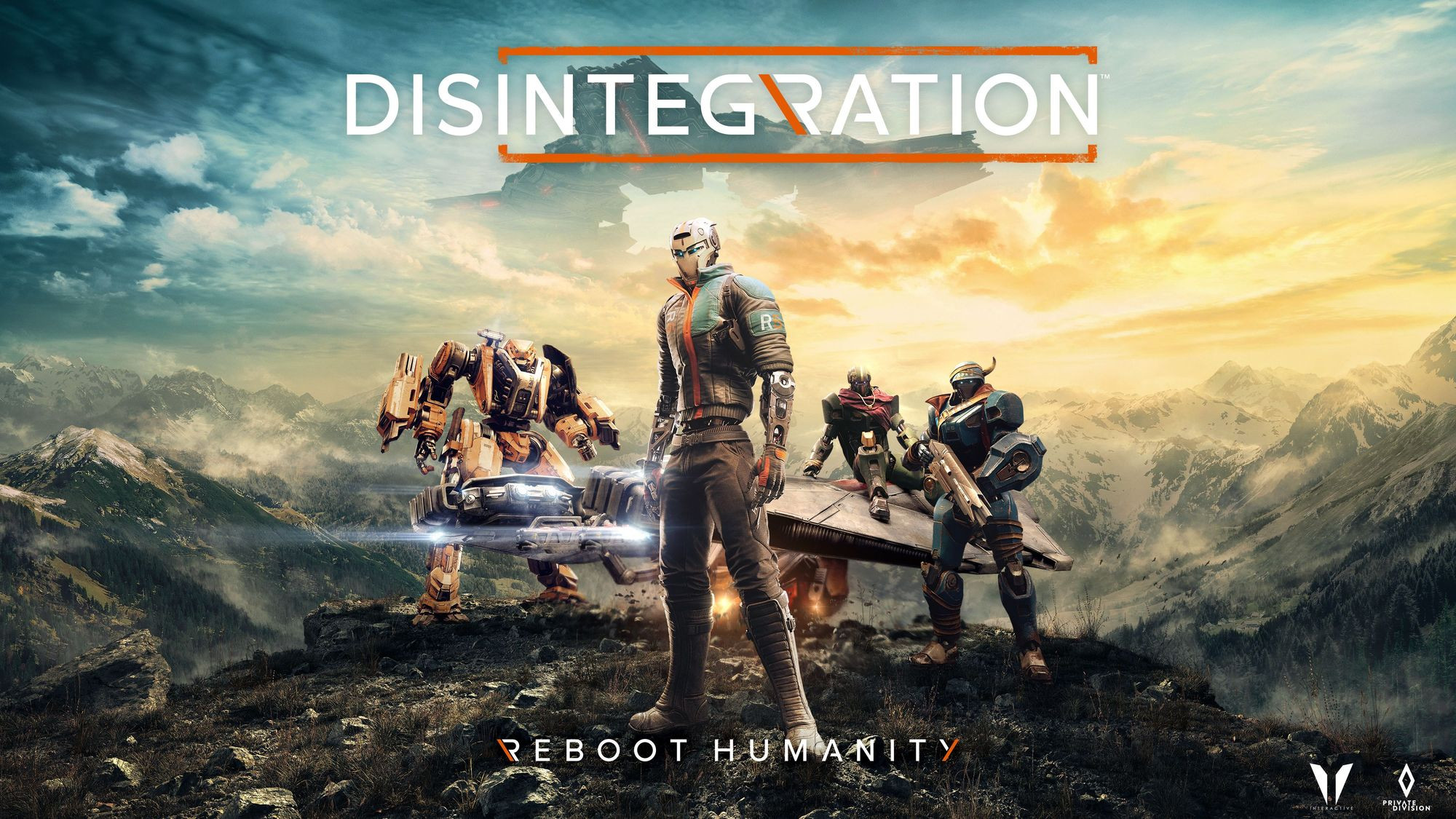 Genre fusions happen all the time in gaming. At best, they offer a fresh new perspective to two solid genres that do well enough alone. At their worst, they are a confusing mess that do little but frustrate the player. Combining an FPS with RTS elements is nothing new. We have games that ask the player to direct groups of soldiers within their field of view and others commanding a companion to do specific actions.

However, it’s not often that a game truly asks the player to be in the thick of combat while directing troops on the ground. This juggling act is what sets Disintegration apart from other tactical shooters.

Disintegration is a first-person shooter with elements of real-time strategy. Players take control of the gravcycle, a sort of floating command unit. The player’s primary role is to call out orders to a team of up to 4 A.I. companions to accomplish objectives. While on the gravcycle, players are able to shoot weapons and provide aid to the team as a floating aid station at times.

The game’s campaign is split into 12 missions. Each mission has its own pre-determined load out and squad composition. Before deploying into battle, the game allows the player to wander around a staging area where they can talk to members of the crew and get side missions. The challenge goals usually involve the player doing specific actions or completing a mission within a specific time frame. The rewards for accomplishing these challenges are upgrade chips that the player can spend to upgrade the gravcycle and/or their squadmates.

The gravcycle is the beating heart of the team. It provides a bird’s eye view of the battlefield, while the pilot issues commands to the squad. It is able to increase and decrease its altitude according to how close it is from the ground. There is a cap to which it can ascend. When off a cliff, it will stay in the air for a few seconds before falling out of the sky. I don’t really know how that works, but for the game’s sake, I can let it go. It also has a boost function that allows it to dodge incoming fire, though it comes at the cost of a long cooldown.

In the campaign, the gravcycle’s armaments change depending on the level. The player has no control over what arms they’ll have to employ. Looking back, I think the choice ultimately works out in the end as it may prevent players from mindlessly going into each mission with the best weapon possible. Plus, with the right loadout, the challenges would be too easy to beat.

On multiplayer, players have to choose from a range of specialist gravcycles and their accompanying squad build. Players play common game modes like deathmatch, with an escort type of game mode being the only outlier. On a side note, there are weapons in the multiplayer that do not appear in the campaign. And maybe for good reason. The nuke weapon might be a tad bit on the overkill side when balancing the game’s campaign.

The RTS aspect of the game comes from the player being able to command units to take positions at the push of a button. Individual squad units position themselves as best they can, often seeking cover nearest to the player’s ping. They will fight enemies closest to them unless the player issues a focus fire command. In which case, the team will drop everything to kill the painted target.

The player’s dependency on the team extends to more than just killing enemies. They need the team to interact with the world – activating doors and planting explosive charges and the like. While on scan mode, the squad can be directed to open up containers for scrap. These scrap are what’s needed to reach higher levels and allow the allocation of more upgrade chips.

At its best, Disintegration is a very fun juggling act. The player needs to constantly switch between active combat and supporting the team from afar. Supporting the team could mean dropping healing orbs or covering any blind spots that they may have. Additionally, the most useful form of support Romer can provide is by dueling other aerial units. The squad can tickle flying units for what it’s worth, but they’re not that good in taking them down.

Combining unit abilities is fun… for the first dozen times, they do it. Interactions like a Warrior’s concussion grenade lowering the defense of affected targets adds to the tactical nature of the game. But if there’s only about a couple of ways of achieving the same end result, what follows is that the player will start to run on autopilot. Another problem lies in the fact that certain cooldowns are too far apart to ever encourage bold moves. The Ranger’s slow field combos well with the Striker’s mortar strike. The problem is, the slow field has a painfully long cooldown period. So, the only choice then is to hold back on using either ability.

The biggest issue I have with the game is that the companion A.I. units are sometimes a handful. There are times when they standstill in the middle of a firefight, focusing entirely on one random enemy. Other times, they could run towards the path of exploding landmines.

On easier difficulties, it’s not much of an issue. The gravcycle does more damage, eliminating the reliance on the squad. However, playing on higher difficulties requires the player to play as passively as possible while keeping safe from enemy fire. And if anyone is unfortunate enough to get themselves killed, you might not have much of a choice but retrieve their brain can from a hotzone. The alternative is waiting 30 seconds before the Game Over screen pops up.

The game’s visual doesn’t exactly inspire much in the way of adventuring. It’s a lot of grays and it’s a little rough on the edges. I don’t know, it just feels like the designers didn’t know whether to push for a more serious tone or a light-hearted adventurous one. Moreover, character animations are stiff. You’d think that the more active characters are more expressive, but they aren’t. Outside of a handful of cutscenes, they’re just as dull as the more quiet characters.

The sounds are actually serviceable. Every weapon in the game has a distinct sound and enemies produce that dangerous killer A.I. screeching that just gets under your skin. There’s nothing much in the game’s soundtracks that warrants any particular comment. It’s just there, I guess.

The story revolves around Romer Shoal, a former human, who chose to put his very being on a brain can and continue walking this Earth as a robot. Fast forward many years later, and the world’s not looking so good. A powerful faction known as the Rayonne started to call the shots and have taken control of Earth away from humans. The last remaining groups of free peoples organize themselves into Outlaws. Living life on their own terms.

After escaping Black Shuck and the Iron Cloud, Romer finds himself in the company of fellow misfits. He then decides to do whatever he can to get as far away from the Rayonne as possible. That changed with a chance encounter with the Human Liberation Coalition. Now the group of ragtag fighters fights for something bigger than themselves.

As the name implies, Disintegration is a play on words. Romer’s unwillingness to integrate with the Rayonne collective says something about himself as an individual. But the story has a hard time keeping pace with itself. The story’s so rushed at times that individual moments with the team are wasted because somehow transitioning to the next plot point is more important than building the world around the characters within the story.

There is much to like about this game. It’s a unique experience that few big studios are willing to take. Perhaps the game would have been better if it had a little more time to bake. We’ll never know. What I do know is that, at it’s best, the game’s a frantic tactical shooter with some moments of pure fun. Otherwise, it’s just another shooter from the perspective of a hoverbike. I still would recommend this game just for the novelty factor alone. Honestly, it’s not the worst sci-fi shooter out there, it just doesn’t do much to stand out besides being a little different.

Disintegration – Review
Score Definition
We tell you, it’s a good game! It’s not average! It might have some problems here and there, but you have to admit it is a “Good” game.
Pros
Pushes a player's multitasking skills on higher difficulties
Semi-destructible objects
A good range of weapons spread throughout the campaign
A good mix of action and tactics
Cons
Rough around the edges
Visuals lack a distinct look
A.I. companions need much baby sitting
Rushed story
7
Good