The Spice must flow!!! 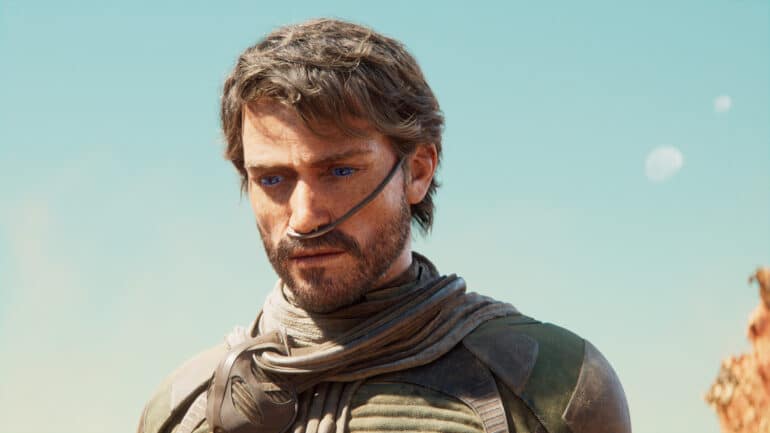 Dune Awakening Has Been Unveiled

Dune Awakening was first revealed during the Opening Night Live of Gamescom 2022. According to Funcom, this is an ambitious next step for open-world survival MMOs. It will be launching on PC, PS5, and Xbox Series X/S.

The Best of Both Worlds and Then Some

This upcoming MMO will be set on Arrakis and will take inspiration from both Frank Herbert’s novels and Denis Villenueve’s Academy Award-winning film. It will also explore some new possibilities for the franchise.

The new cinematic trailer gives fans a taste of what is to come for the game. It can now be wishlisted on Steam and anyone can now sign up for the beta on the official website. More details about the Beta test will be shared at a later date.

Dune Awakening combines the grittiness and creativity of survival games with the social interactivity of large-scale, persistent multiplayer games to create a unique and ambitious Open World Survival MMO. Dominate and survive the sands of Arrakis that are shared by thousands of players.

Uncover unmapped sectors to find its great secrets and riches before the Coriolis storms would once again shift the sands and alter the landscape. Bravely escape the colossal sandworms, build a home from shelter to mighty base, and traverse the dunes in iconic vehicles from the universe.

The hunt for Spice is still going by deploying the harvester and protecting it from rival factions in fast-paced, deadly combat that shifts seamlessly from armored groundcars to ornithopters in the sky. Make plans for become the most powerful individual and gain influence within the Landsraad.

Rui Casais, CEO of Funcom, says, “Funcom has been pushing boundaries in the MMO genre for 20 years. It’s where our roots are. We built on that with Conan Exiles, our first big success in the survival space. With Dune: Awakening we’re bridging the survival and MMO genres to create something truly unique and ambitious within a universe we’re all so passionate about.”

VP of Interactive Media at Legendary Entertainment, Sam Rappaport, adds, “Dune: Awakening truly promises to bring the world of Dune to life in an exciting new way. We are thrilled to be creating this with a partner like Funcom, who is so adept at capturing the rich detail and wonder of cinematic worlds for the gaming audience.”

Dune Awakening will be available on PC, PS5, and Xbox Series X/S. No official release window was announced.