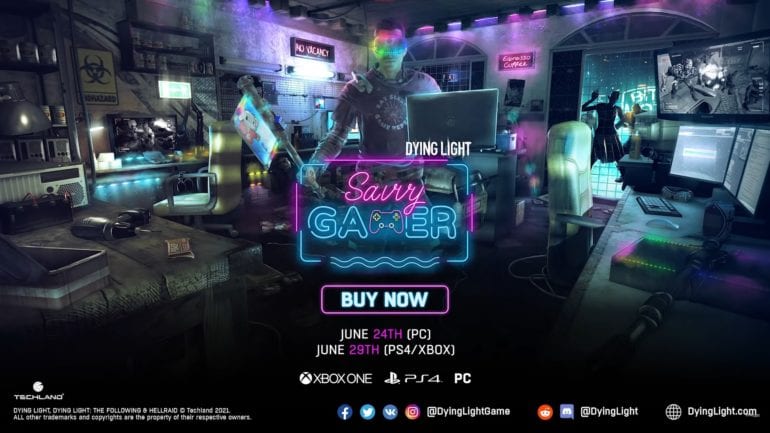 Game company Techland has recently announced there will be a new event happening next month on popular video game Dying Light.

There will be a 4th of July event happening next month and today a new gamer-themed skin pack will be available. The Savvy Gamer Bundle offers DIY gamer-gear-themed weapons, RGB-LED outfit, and the brand-new 1337 buggy skin. It is now available for purchase on PC today and will be released on consoles on June 29 for $2.99 USD only.

Check out the full list of skins available in the bundle:

Running from July 1 through July 11, the 4th of July event celebrates the American Independence, which will give players the chance to fire up some fireworks. Killing 50 infected with fireworks will reward them with a random Gold Melee Weapon, while players working towards the global objective of 10,000,000 infected ills with fireworks will earn 3x King Mods. They can get the five fireworks from the Quartermaster per day.

Starting June 24 to July 8, players can get the game at a discounted price during the Steam Summer Sale. The standard edition is currently discounted at 66 percent off, while the Enhanced Edition is discounted by 70 percent, and the Platinum Edition with be 75 percent cheaper.

Dying Light: Platinum Edition is now available on PC, PlayStation, and Xbox One. Our resident reviewer says, “Overall, Dying light: Platinum Edition is a great value proposition for newcomers to the franchise. With its base campaign and its fun DLCs, The Following Expansion which improved on the mechanics of the game and the interesting but sloppy Hellraid DLC which tries to change up the game in its own way.”