The Definitive Edition, the last and final version of this game. 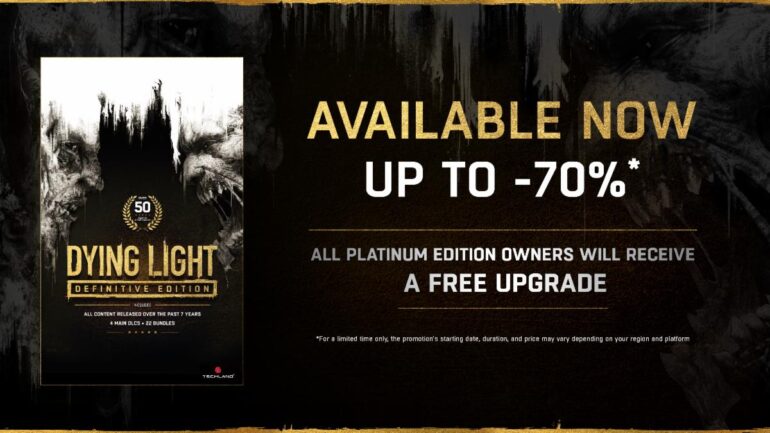 According to the developers, this will be the ultimate edition of the original Dying Light title and will debut on June 9, 2022. This will mark the grand finale of new, active development on the title.

This version will include the base game and 26 DLCs including skin bundles and expansion packs. This will be available digitally on all platforms with massive discounts of up to 70 percent off. Platinum Edition owners can upgrade to the Definitive Edition for free. The Nintendo Switch digital and physical release will come at a later time.

Here is a letter that Techland penned recently:

Dying Light has been a fantastic journey and we are grateful to the community for supporting the game with us during these last 7 years. However, we also understand the sheer number of updates and DLCs released for our game might be daunting for new and returning players. We don’t want you to miss out on any part of the full Dying Light experience.

That’s why we are proud to introduce Dying Light: Definitive Edition! This ultimate edition will premiere on June 9 for a massive discount of up to 70% off!

Dying Light: Definitive Edition will be available on all platforms as a digital release. The Nintendo Switch version will release at a later date as both a digital and retail release.

The Definitive Edition consists of the base game and all 26 DLCs (including skin bundles and expansion packs). It’s the best way to experience the amount of content and love we have poured into this game over 7 long years.

That’s not all! We couldn’t be happier with the awesome community that fully embraced their experience in the city of Harran and kept motivating us to aim ever higher. To thank you for allowing us to spend all these great years with Dying Light, we would like to present everyone with a free DLC – Harran Tactical Unit Bundle for a limited time—2 weeks after the Definitive Edition’s premiere. This offer will be available on Steam, the Epic Games Store, GOG, the PlayStation Store, and the Microsoft Store on Xbox.

If you already own the Platinum Edition of the game, you will be automatically upgraded to Definitive Edition for free! You will be able to enjoy 5 new bundles at no additional cost.

This release marks an important moment in the history of Dying Light. On the one hand, it’s a nod to 7 years of immense love and support for this game; on the other, it’s the grand finale of our adventures in Harran. But let’s see what the future brings. And don’t worry—we will keep a steady reroll of previous events for you to enjoy.

Once again, we couldn’t be happier with the awe-inspiring memories this game has brought us, primarily because of our wonderful community. And yet, we also feel it’s the perfect time to move on and shift our focus towards brand-new adventures in the city of Villedor.