Elden Ring Cinquedea Dagger – Where to Find and How to Get

A guide on how to find the Cinquedea in Elden Ring. 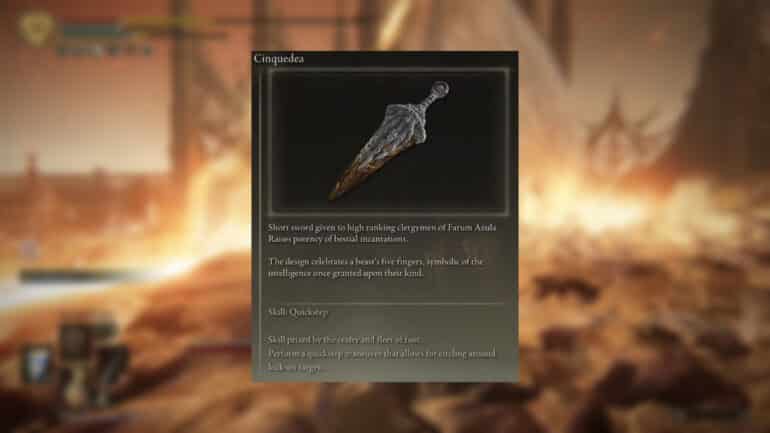 The Cinquedea is just one of the many hidden unique weapons found in the Lands Between. This dagger became quite a tricky weapon to obtain for some time due to a bug that prevented players to land down safely on a spot along the path to where the dagger is. Thankfully, that has been patched, but the trek to get the Cinquedea is still quite treacherous for the clumsy Tarnished.

In this guide, we will talk about where to find the Cinquedera, how to safely descend the path to get it, and its stats and skills.

Where to Get the Cinquedea in Elden Ring?

The Cinquedea can be found at the outer bottom walls of the Bestial Sanctum, near the remains of a beast.

How to Get the Cinquedea Dagger in Elden Ring?

The journey to get the Cinquedea involves a bit of parkour and some steady footing as you will basically have to hug the wall and use its ledges to slowly make your descent to where the dagger is at.

It is recommended to ride Torrent while making your way down as its double jump ability can give you a better control on how you want to descend.

Make your way to the southwest side of the Bestial Sanctum

Near the spot where there are two birds perched on the edge of the cliff, try to peek down and find the spot where a huge root is at. Jump down this root and carefully move on top of it an locate the next root below it. Jump down again going from root to root until you make it low enough to jump down to the first roof safely.

Jump towards the pillars’ and wall’s ledges

While on the first roof, you can decide to jump towards one of the outer pillars while aiming to land on its ledges, or use Torrent’s double jump to land towards the ledges on the wall below where you are standing on. Keep on jumping between ledge to ledge while making sure that you don’t jump towards one that is too low for the fall damage to kick in.

Make your way down the second and down to the final third floor. Be careful as there are bats in the area that can interfere with your traversal.

Now on the third floor, make your way to the spot in between the fifth and the sixth pillar, or the space in between the pillars that is directly behind the Bestial Sanctum. Interact with the beast’s remains and you will get the Cinquedea.

Though it is not specifically listed as a passive effect, the Cinquedea actually raises the potency of bestial incantations like the Gurranq’s Beast Claw and Stone of Gurranq.

Check out this video by LaserBolt talking about a build that is centered around the Cinquedea: