Elden Ring How to Get the Elden Stars Incantation

A guide on how to get and use the Elden Stars incantation in Elden Ring. 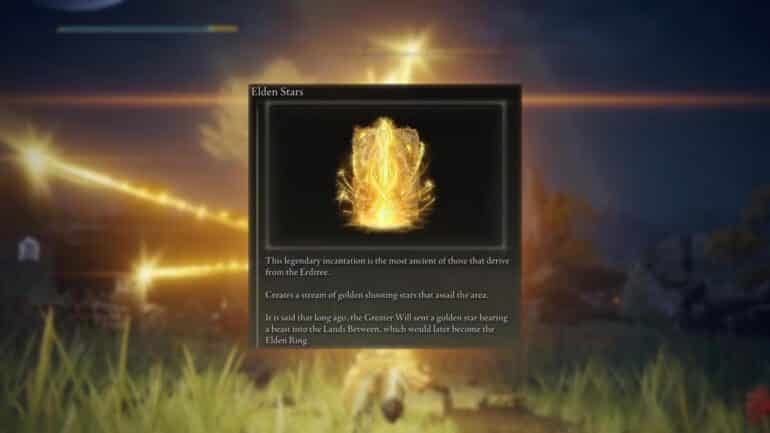 Elden Stars is once of the legendary incantations that can be obtained in Elden Ring. This incantation has a two-pronged attack that breaks the enemy’s poise which is followed up by an explosion that deals significant amounts of damage.

In this guide, we will talk about how to obtain the Elden Stars incantation, as well as some tips on how to effectively use it in an encounter.

How to Get the Elden Stars Incantation in Elden Ring

The Elden Stars incantation can be found from a corpse at the ants’ nest in Deeproot Depths. To access the Deeproot Depths, you must have defeated Radahn, opened up Nokron, and defeated the two Valiant Gargoyles in Siofra Aqueduct. This guide picks up from when you activate the Great Waterfall Basin Site of Grace.

Ride the coffin to the Deeproot Depths

From the Great Waterfall Basin Site of Grace, go to the coffin at the base of the waterfall. Examine the coffin to get inside it and it will take you up to the Deeproot Depths.

From the Site of Grace, head west and climb up on top of the branch and continue on the branch that runs along near the side of the cliff face.

Jump down the branch and into the cave

Just a short distance form where you started, jump down to a lower branch to your right that leads to a hole on the side of the cliff face. This is the entrance of the ants’ nest.

There are plenty of ants in this nest, but you can continue riding Torrent and just zip and jump past the ants. Use the cave’s left wall as a guide to make your way to the other cliff hole adjacent to the one you entered in. You will basically be doing a wide U-turn inside the cave.

Once you reach the other opening, pillage the corpse and you will get the Elden Stars incantation.

Understanding the main purpose of the Elden Stars incantation is vital to know if it will be effective to incorporate to your build or not. Sadly, it does have quite a lot more cons than pros that cannot be easily compensated with.

How to Use the Elden Stars Incantation in Elden Ring

The Elden Stars incantation is not meant to be used as a DPS move since despite its explosion’s damage, it is simply negated by how slow you can chant the spell and enemies can easily avoid the main projectile.

What the Elden Stars shines most on is its ability to shred the poise of an enemy, easily making them stagger. The fighting space should be taken into account, as mentioned as one of its cons, you want to make sure that you land as many small projectiles as possible on the target.

Large rooms and battlefields with not much obstacles is where you want to use this incantation. Otherwise, you may have to get too close to the enemy just so you can maximize the chance to stagger, which is risky.

In boss fights, Elden Stars works best if you summon a mimic who will do the damage for you. The high stagger chance will make sure that your mimic will stay alive for as long as possible.

Elden Stars can also be used on PvPs or invasions as the small projectiles will serve as a distraction for your enemy to buy you some time or get you some distance away from them.

Overall, Elden Stars is a bit of a hit and a miss at its current state. Its main purpose of being a poise-breaker is good, but muddied by its slow casting speed and recovery. It does give quite a light show and when it does work perfectly against enemies, especially against bosses, it is such a satisfying spectacle to see.

Check out this video by RageGamingVideos showcasing the Elden Stars incantation: