A lesson in paying attention 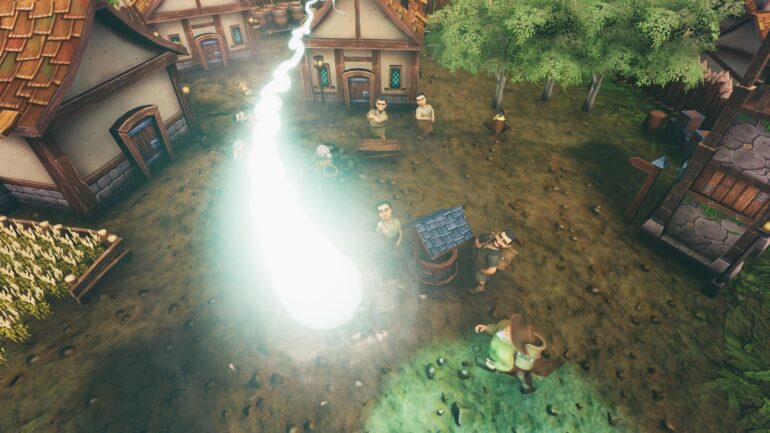 Fata Deum is an upcoming god game by developer 42 Bits Entertainment, and publisher Hooded Horse. The Fata Deum demo puts you in the role of a god competing with other gods for territory and the faith of its inhabitants. The demo itself spans 6 in-games and covers the basics of the game.

An instance of Fata Deum covers an area the size of an continent, with smaller instances focusing on provinces and the settlements that reside within them. There is a day and night cycle, both of which have certain actions that the player can only do during those times.

During the day, players execute wonders that either inspire citizens to do do good deeds or terrify them into submission. Performing wonders grants the player belief points for that particular settlement. I am actually looking forward to how this affects the main game. There are stats on each NPC that the player can see. Generally, you want to bring as many followers into the flock as possible. But there’s no denying that hard working and devoted followers are more preferable, especially since it costs mana to perform wonders.

Speaking of mana. The demo was rather generous when it came to my store of power, to the point that I was clicking every random NPC and inspiring them to do by their neighbors. Additionally, whenever my powers were running low, the game highlighted the location of a relic for me to replenish my mana with.

Maybe it’s just for the purpose of driving a point, I don’t mind. Maybe when the game comes out, I’ll have to be cautious about who I allow to be my followers.

When it’s nighttime, the player can influence villagers’ productiveness through dreams and implant suggestions for them to build various structures, and even entire settlements. This is the part of the demo that really caught my attention. The player cannot declare any piece of land and tell their people to build on that location. Instead, there are locations reserved for building. I like this because it allows me to focus on other things like: Which structures are best suited to a particular location? Do I need a watchtower here to warn of enemy attacks? Is this a good spot for gathering?

These are the thoughts that ran through my head during that part of the demo.

The objective of the game is to grow in power and become the dominant force on the map. This is achieved by spreading your influence and increasing the number of your devotees. Fulfilling prayers is one way of leveling up. During my time in the demo, I’ve only ever gotten simple tasks like performing wonders and finding relics. On this regard, I hope the game doesn’t get too harsh when it came to fulfilling prayers. Imagine answering every single prayer on a map. That’s… a lot.

During my entire time, I’ve learned quite a lot about the game. Though it’s still mostly the controls and the basics of settlement management. I even learned how to use my fairy-like companion to gather materials for me. I never got the hang of it because I never really found out where to put it. Not in the settlements or in my altar. I suppose the game can a better job with indicating where they can dropped off.

If you like games like populous and Black & White, you’re going to like Fata Deum. There are elements from both games present with this game. The micro and macro aspects are intriguing. The fact that I don’t have to micromanage everyone gives me some level of relief. This is one something to look forward to if you’re a fan of the genre.

The Fata Deum demo is playable during Steam’s Next Fest this coming February 21st to the 28th.