In this preview, we have a look at Firegirl: Hack 'n Splash Rescue 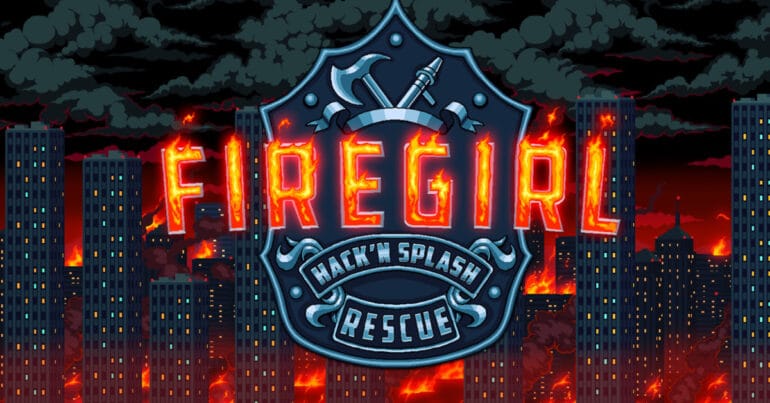 When I first saw the trailer for Firegirl: Hack n Splash Rescue, the first thing that came to mind was… is this Fire Force? As actual firefighters? But more than that, the presentation and visuals is what interested me the most. Battling monster born of fire, and saving people in distress, and finding that balance to do both while a wall of fire is right at your back. That’s plenty of reason to like this game, right?

Well… that’s half the story, yes. Turns out, watching gameplay from the trailer is a bit different from actually playing it from the demo of Firegirl.

My first minutes of the game, did not go as planned. I was going to play the demo with a controller. But the game doesn’t recognize PlayStation controllers. A bit of a not-so-good start, forcing me to go mouse and keyboard for a game that’s better with a controller. It was ok for the most part, A & D moved our Firegirl around and W & S panned the camera above and below. This came in handy for situations when you’re looking routes or seeing if the jump you’re about to make has fire just beyond the screen.

It was when I was using the fire hose that it started giving me problems. Seems like the controls are a little sensitive on mouse, to the point that you’re either accurate the first time or spraying the floor. This is problem since you need to be steady when putting out flame monsters. Also, if you’re having to adjust your aim every time you use the hose, it’s going to waste some of that precious water reserved.

Other than getting used to mouse controls, the rest of the tutorial stage was serviceable. Using the hose as a water based jetpack is fun, but I’m not about to go through a building by hovering over everything… or was I?

Our first fire post training was a building on fire. The chief tells us how many people need help over the radio, before we literally burst onto the scene using the firetruck, and the mission starts proper. I have to say, the visuals are far impressive than I expected. Fire was everywhere, and there is a pressure to keep moving forward – first by the count down timer before the building collapses and by the wall of fires that’s clearly there so that I won’t waste time back tracking. It is technically impressive.

So, I go through the bottom of the building. Half expecting to see signs of help or any indicator as to where the victims might be. I reach the end of the hall, and then leave the building. My first job, and messed it up so badly by not saving anyone. But the game doesn’t tell me that. I was still getting paid with funding and fan donations. Yes, FAN DONATIONS. Somewhere, somehow, people are watching me and by doing heroic acts, I get more fans and donations. The funny thing is, on my second mission, the only thing I saved was a cat. And that was enough reason for the mayor to give me a medal.

Sure, we find out a little more about the world and the fire monsters that terrorize it, but let’s not forget the fact that I got a medal for saving a cat. Ok… I guess.

From that point on, it was the same mission over and over again. The same burning building, the same enemies. I was hoping to see the other locations too – the forest and the burning train. But seeing as this is a demo, I can understand why they aren’t there yet. Every run I go through gets me more money for upgrades. And that’s about it actually. It’s to see how far the player can go while familiarizing themselves to the mechanics. Oh, and sometimes the people you save want to be hired as station staff. And that means, more upgrades and the place looks that much more livelier.

For me, it’s an ok gameplay loop. There’s no story to care about yet, and the demo is just missing out on the variety provided by a second level type. But it does let us see what we can buy and upgrade. So, I’ll take whatever I can get for now.

While I do like the gameplay loop as an idea. There are some things I draw issue with. Mostly, the hit animation takes forever to complete. I suppose it’s to give greater importance to not rushing through a stage. But watching Firegirl get enveloped in flames, and eventually flame out, gets tiring. Especially times when I really just want to GTFO. I don’t know, it’s drawn out and annoying. Fighting monsters has its moments though. It feels good to stand your ground as flame monsters advance. Hitting monsters off ceilings and the flame bats, with mouse controls, that’s not so good feeling.

Also, I feel like the timer is too strict. There are stages when I think I can afford to stay a little longer to search for more survivors, only to be pressured to leave 30 seconds later. Water’s a scarce resource. And while the extra time and water pick up’s that pop up here and there help, if a couple of hits is enough to make me play it as cautiously as possible, doesn’t that ruin the pacing a bit?

Despite looking very sharp for 2-D sprites with 3-D environments, the near oppressive gameplay loop is something I draw concern with. And if PlayStation controllers still aren’t recognized in the full release, it’s not going to get easier moving forward, especially when mouse controllers are as sensitive as they are with this demo. But it might just be a case of getting used to it.

Firegirl: Hack & Splash Rescue seems like a very fun game, and maybe I got the wrong impressions from the demo build. Perhaps the full release might set everything right. I sure hope so.

The game will launch on PC and all major consoles on December 14th, 2021. In the meantime the demo of the game is still up on Steam Next Fest until Oct. 7th, 2021.