Forza Horizon 5: All Supported Wheels For PC and Xbox

Best racing wheels for Forza Horizon 5 and why is it worth getting one. 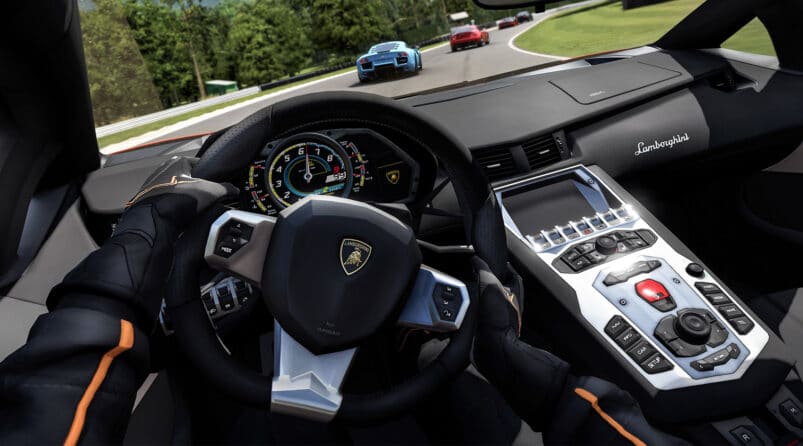 When it comes to Forza Horizon 5 and other driving simulators, using a steering wheel simply adds that extra spark that completely immerses you in whatever you’re doing, especially when you’re wearing headphones.

This guide lists all of the supported steering wheels for Forza Horizon 5 per category: PC, Xbox, and PC/Xbox. We also have recommendations on the best wheels to use, for when you want to experience the game more as a SimCade experience, using the wheel to move the cars around and feel how the wheel reacts to them can really be awesome.

It also feels much more natural to use the steering wheel to ease off the brakes and make sure you don’t crash into any obstacles when making tight turns. It provides just enough resistance to what you’re trying to do in order to make you feel like you’re driving a real vehicle.

In comparison to slightly moving an analog stick, gripping the wheel and turning it an exact amount feels significantly more precise. Pushing the brake pedals just enough to provide you with just the right amount of braking makes navigating those critical sharp turns much easier.

The following are supported brands of wheels that are compatible for the PC version of Forza Horizon 5 only. Most of these are models that were specifically made for PlayStation consoles but can be used for PC:

The following are supported brands of wheels for Xbox version only of Forza Horizon 5:

Because all Thrustmaster TX wheels use the same vendor product identifier, the 458 Edition will be the default (VIDPID). Make sure to select your model to ensure correct button mapping.

The following are supported brands of wheels for both the PC and Xbox version of Forza Horizon 5:

Based on reviews, the Logitech wheels have a wide range. Fanatec wheels are also customizable to adjust the range right on the wheel itself, and could be considered more superior to Logitech in this regard, and it is less expensive than Thrustmaster wheels. Lastly, we would advise against purchasing a wheel that does not allow you to change the degrees of rotation.

The Thrustmaster T300 RS racing wheel has an 11-inch brushed metal wheel with rubber grips on all sides, so you won’t slip even if the race gets a little rough. Dual belts and a brushless force feedback motor power the Thrustmaster T300 RS at 25 watts. Keep a firm grip on this wheel, because you’ll be able to feel the road through it. Wheel features 1,080-degree range, Hall Effect sensors for precision and two paddle shifters to help you get into the right gear.

As good as the belt-driven Fanatec ClubSport V2.5 GT Racing Wheel was its initial price of $999 when it was first released. When the Fanatec ClubSport V2.5 GT2 BMW edition of the wheel was released, the wheel was replaced but had the same base and its excellent motor in place, the price has been lowered significantly. Due to the dual-belt system that Fanatec uses, the wheel is able to maintain its smoothness while avoiding slippage. You can also pair this wheel with a variety of high-quality accessories, such as shifters, other wheels, cockpits, and wheel stands.

You can get into sim racing for a low price with Logitech’s G920 racing wheel. The Driving Force’s 900-degree lock-to-lock rotation means you can turn the wheel 2.5 times. It moves like a steering wheel in a car. Even though it isn’t the most nuanced or quiet, this provides a reasonable level of realism in games. Additionally, Logitech has added a “Trueforce” feature, which uses a vibration motor to enhance the experience. You can feel the engine revs vibrating through the steering column straight into your hands with Trueforce in supported games. A pedal set is also included in this kit, further lowering the cost of sim racing.

Is it worth buying a wheel to play Forza Horizon 5?

Some aspects of the game are easier to play with a wheel, while others are more difficult. High-powered dirt and cross-country racing, as well as drifting, are the aspects of the game that are more difficult if you are using the wheel. The controller will always be so much more forgiving than a wheel in most cases. But if you want to win races, stick to the controller. The controller will always be faster and provide better control.

The wheel is just excellent for the fun factor and providing a more realistic driving experience with the cars. But is it worth buying one for let’s say $400? That is a $200 to $250 wheel if it’s on sale. And don’t forget that you’ll need to clamp it to something, which could add another $100 to the cost. Don’t fool yourself into thinking that you can simply sit in a regular chair with the pedals on the floor and the wheel clamped to a desk will suffice. You can, of course, do that, but it’s a terrible experience when compared to having everything securely in place. Lastly, consider the fact if you would only use it for less than 10% of your gaming time.

Also read our other guides for Forza Horizon 5: