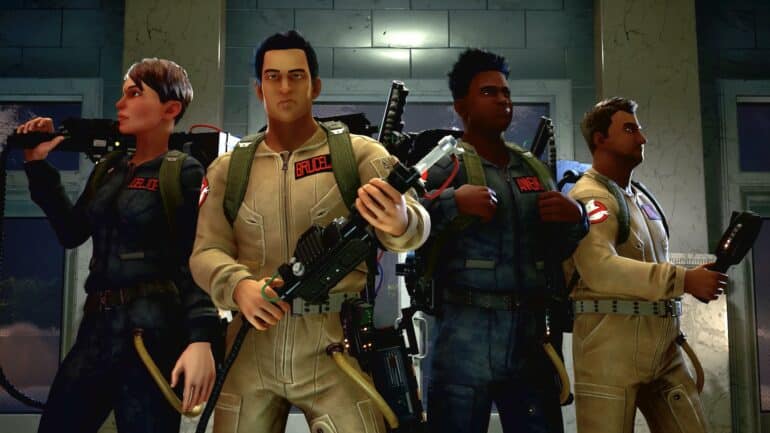 The upcoming 4v1 video game features four players taking on the role as members of the Ghostbusters team. They will be the ones to pursue the ghosts that are terrorizing public locations. Work together to find the Ghost, trap them with the Particle Thrower, and capture them at the perfect moment.

Players can also take on the role as the Ghost to scare unsuspecting citizens at various locations. They can fly and teleport between rifts as they like. Possess objects lying around each room to sneak by Ghostbusters trying to capture them and scare the passerby. They can also slime them and summon ghoulish minions to do the dirty work. Haunt each camp as one of the many Ghosts with various abilities to master.

Customize a Ghostbuster or Ghost at the iconic Firehouse, upgrade equipment and abilities, and practice with the Particle Thrower. Chat with Winston Zeddemore voiced by Ernie Hudson and get missions before going to the field. Meet some new and old friends like Dan Aykroyd’s Ray Stantz and many more.

Ghostbusters Spirits Unleashed supports cross-platform multiplayer. Players on PC, PS4 and PS5, and Xbox Series X/S or Xbox One can play together. AI companions can play the other characters if there are no other human players to fill the role or just go solo Ghostbusters or a solo Ghost to play offline.

“Ghostbusters is one of the most beloved IPs in the world, so we are pulling out all the stops to make something special and accessible to this diverse fanbase,” said Charles Brungardt, CEO, IllFonic. “If you’re someone who loves the movies or asymmetrical multiplayer games, this was made for you.”

Ghostbusters Spirits Unleashed launches on Q4 2022. It will be available on PS4, PS5, Xbox One, Xbox Series X/S, and PC via Epic Games Store.