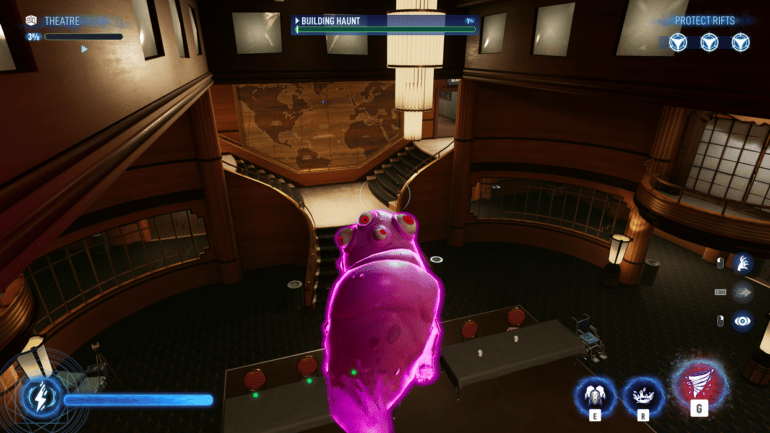 In Ghostbusters Spirits Unleashed ghosts take the form of multiple types and have different abilities depending on which you’re playing as. Each ghost type has their own strengths and weaknesses so you need to be privy on how to play them if you want to escape the meddling clutches of the busters. This guide will show you all the Ghostbusters Spirits Unleashed ghost types and classes.

Ectoplast ghost types are the beginning ghosts that have well rounded stats. These slippery menace from the other side can coat entire rooms in slime which slow ghostbusters down. Ectoplast ghosts are perfect for beginners just learning the ropes.

Meet Winky. Shall I give you one guess of where it acquired that name? This f-eye-sty Ghost can summon delightfully disgusting puddle of sludge, capable of smothering a large area.

This chap’s Brainy. And before you say anything, yes, Brainy’s dim as a doorknob. But what they lack in intellect, they more than make up for in hurling massive amounts of slime.

Lovely Pokey. You’d think that with a spikey little one like this, you’re better off keeping your distance. But this Ghostie actually fancies himself a bit of a marksman, having honed their long ranged Ecto Torpedo.

Ah, the infamous Slimer. Can we ever be certain where this insatiable entity’s allegiance truly lies? Perhaps not, but what we can be certain of is the hideous amount of noxious slime they can produce in an instant.

Ghouly ghost types specialize in possessions. Their ability to spread fear in a map has ghost busters quickly panicking to put a stop to your rifts and catch you quickly. Ghouly ghosts are able to quickly fill up the haunt meter to secure victory.

Perhaps the inspiration for “devils” as we know them in literature, the Drake is fiery, red fiend with a penchant for possessing lesser, worried living humans. Love the Drake.

If the Ghoul had a name, it would be Infernal. While I must admit the chain-draped aesthetic is a bit much, even for me, it’s a necessity for something with a mastery of and born from pure darkness.

Imagine, if you will, the embodiment of concentrated fear. The Wraith is a glorious and violent creature that seeks to manifest horror with a Nightmare Pulse of pure psychokinetic energy.

Basher ghost types can be considered the tank of the bunch. They’re hard to take down due to how equipped they are to resists ghost busting equipment. Basher ghosts are not easy to tether and can only be stunned for a very short amount of time making them a team effort to take down.

Lunk is the kind of Ghost that prefers working with their hands. Provided that work includes smashing anything and everything within their reach.

With the Squidler and its monstrous tentacles everything is a weapon. Making a mess has never felt so…ghastly.

Bashing isn’t only a physical mindset. Courtesy of the Gloom, we’ve observed that it can be spectral as well. Crush and maim from anywhere you choose!

Howler ghost types can be considered the magician class of Ghostbusters Spirits Unleashed. Their longer minion lifespan and increased range of attacks make them an aggressive attacker against ghost busters.

Built to scream, Shriek is the perfect Howler. Not much in the way of personality, but their piercing scream will leave your ears ringing for hours.

I can’t recall the number of times I wished I could silence one of my colleagues. Here we are, on the other side, and Chomp has perfected such an ability with their Silence Shroud.

The nightmarish words spoken by Bramble aren’t necessarily meant for the living, instead it prefers to focus its voice on an ethereal creature of its own, the Floating Seeker.

Poltergeist ghost types are the most difficult class of ghost to control. They’re easier to tether and they don’t inspire fear as much as other ghosts making them harder to win in maps. What they’re good at is sabotaging ghost buster efforts to undermine them making it a persistent threat that’s hard to hunt down. However, they can be easily tethered and has a longer stun period which makes the Poltergeist a risky ghost to play as.

Zappy should’ve been named “Zippy” based on the way they dash around a location. I suppose the stunning surprise left in its wake may have informed its alias.

Pain without healing. Such is the Gnasher, grizzled by time and experience. Its snare has become its greatest weapon as the Gnasher whips a powerful chain arc to jolt groups of the living.

A personification of the living’s environmental cruelty, Toxie is bathed in chemical brilliance. A mischievous maker or a reckoning called upon by the tortured Earth itself? I’ll leave you to decide.

How to Unlock New Ghosts in Ghostbusters Spirits Unleashed?

The only way to unlock new ghosts in Ghostbusters Spirits Unleashed is by increasing your player level. You can do this by playing matches either as the ghost busters or the ghost itself.

By progressing your player level, you’ll be able to unlock new ghost types and variants to play as. The quickest way to level up your player level is by accepting side hustles over at the Fire Department which give you experience boosts upon completion of contracts.

How to Switch Ghosts in Ghostbusters Spirits Unleashed?

You have to go to the ghost world and interact with the book of ghosts to switch to a different ghost type. By default, you play as the Ectoplast ghost type since it’s the very first ghost you unlock. However, as you progress your level, you’ll be able to unlock and play as other Ghostbusters Spirits Unleashed ghosts.

Check out this Youtube video from Shirrako who plays through the Ghostbusters Spirits Unleashed.