The GOAT is back! 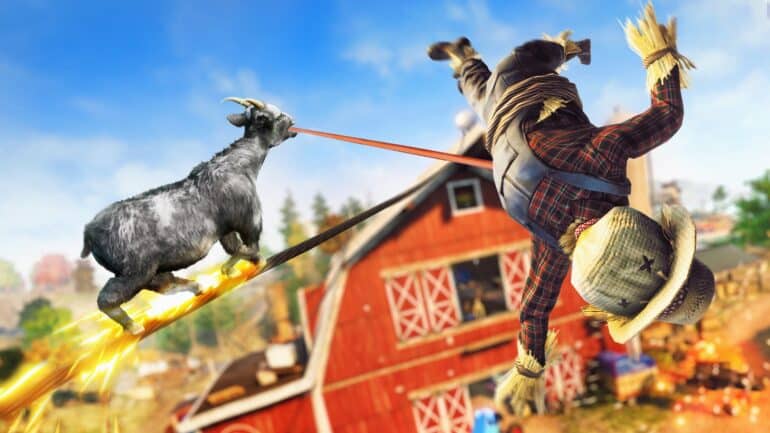 The sequel of the original Goat Simulator starts a new adventure once again featuring Pilgor the goat. She has now found new pastures on the sprawling sandbox island of San Angora where mysteries and chaos follow wherever you go. Players can roam around and discover the island’s secrets or just destroy anything.

The third sequel has it all: goats, goats wearing hats, goats riding a goat wearing a hat, and more. Encounter unnatural disasters, secret animal societies, triple jumping, and many more. The best part of it is players can play together with 4 friends. Online multiplayer is a thing in this game.

• GOATS: You play as a goat! Pilgor, to be exact. However, you’ll also have the chance to wear the skins of many other ‘goats’. Tall goats, tasty goats, angry goats – all the goats you expect and more.

• MULTIPLAYER: Your friends play as goats too! Goat Simulator 3 has 4 player co-op, locally or online. You’ll be able to travel through the world together, cause cooperative mischief aplenty, and compete in 7 fun multiplayer mini-games, and then not be friends anymore.

• EXPLORATION: Goat Simulator 3’s giant new sandbox has plenty to discover – hidden secrets, quests, collectables and the devs actually bothered to make an ending this time! Use your own four hooves to get around, grind on your butt or buckle up for the ride of your life as all goats can drive cars*.

• CHAOS AND REACTIVITY: Cause all manner of mayhem as you lick, headbutt, crash and explode your way across the map, leaving no NPC unannoyed. Toy with the universally recognised four elements (Fire, Electricity, Oil and Alien Goo), test the limits of the world’s physics and interact with suspicious objects for… surprising results.

• CUSTOMISATION: Players can fully customise their goat’s Head, Back, Feet, Body, Horns and Furs with over 300 different gear parts to choose from – from toilet rolls to tea trays… and other actual clothing items, if you want to be like that. Some gear parts will mutate your playstyle by giving you new abilities, all will alter your perceived sense of style.

Santiago Ferrero, Creative Director at Coffee Stain North said “Since the release of the first Goat Simulator, it’s come to our attention that it did not really represent reality and how it actually feels to be a goat. So for the past couple of years, we’ve been doing some googling, and I am pleased to say – we’ve made it. Goat Simulator 3 is by far the greatest goat experience out there. Is it worth the money? Who knows. But will you regret it? Probably.”

Goat Simulator 3 is a direct sequel to Goat Simulator, a silly game that started life as an April Fool’s joke born out of a game jam. In 2014, Goat Simulator became a true goat simulation sensation, selling millions of units across consoles and PC, as well as ‘earning’ ports to Nintendo Switch, iOS, Android, and most-recently Apple Arcade.

Goat Simulator 3 builds on everything fans of the first game loved, raising the baa to brand new heights (sometimes literally). Goat Simulator 3 is coming to Xbox Series X/S and PS5 this fall (this spring on the Southern Hemisphere) and for PC exclusively on the Epic Games Store.

The following physical editions of Goat Simulator 3 will be available to pre-order at most major stores: