God of War Ragnarok – Secret of the Sands Favor Walkthrough 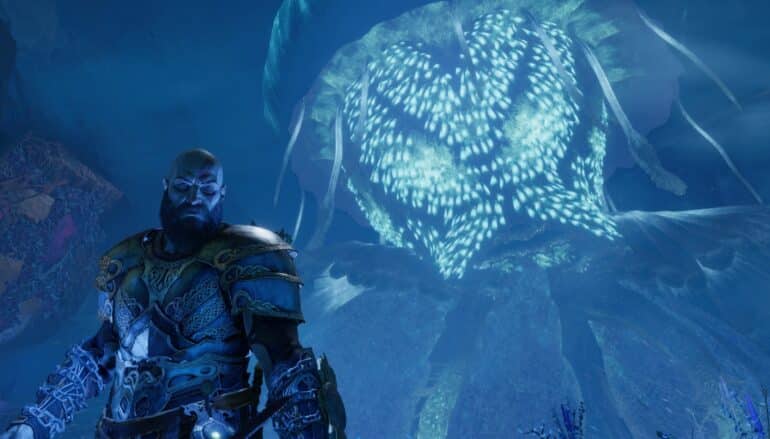 Secret of the Sands is among the various favors you can find in God of War Ragnarok. The father and son duo, joined by Tyr, journey to the Alfheim Realm once again during the events of the main path, “Groa’s Secret,” where you’ll find new regions to explore and this favor to fulfill.

Read on, and this guide will go over everything you need to know to complete the “Secret of the Sands” Favor, including where to find all the collectibles and chests along the way.

How to Unlock the Secret of the Sands Favor?

The Secret of the Sands Favor can be unlocked shortly after completing The Path: Groa’s Secret.

A short cutscene will trigger as you open the door through the Mystic Gateway in Alfheim’s The Strond, where you’ll see a dark elf explode. This will open up a new region, through The Canyons. Follow the path ahead, then climb the wall to your right until you reach the Huldra Brother’s shop. Talk to Sindri in the shop to trigger this Favor.

Secret of the Sands Favor Walkthrough

Find a Way to Reach the Pained Creature

After talking to Sindri, mount the Sled pulled by 2 Gulons (Beasts native to Vanaheim) and head over the marked zone on the map, into The Barrens.

From here, go east and look for a rock formation next to a lit up stone pillar. Unmount the sled and head down the cave entrance. This will grant access to The Below, a new region where you can find the following collectibles:

Continue down the main path, kill the first dark elf you encounter, then throw your axe on the Twilight stone to destroy 3 hive nodes lined up. See the correct angle in the image below.

Kill the dark elves along the way, then climb the wall and turn right. Use your axe to destroy more hive nodes, then go down and collect the Lore (Rune Read) on the wall, next to a red chest.

Continue along the main path and zipple across to the next area. From here, Grapple across the walls and drop down to where you found the Nornir Chest, then open the shortcut (Wooden Gate).

Keep in mind that you won’t be able to open the chest until you open the other wooden gate above. Throw your axe at the twilight stone to clear the hive nodes, then climb back up and grapple across.

Once you reach the other side, you’ll find the third bell lock for the Nornir chest. Open the other shortcut first, then hit all 3 bells quickly to unlock the chest, which contains an Idunn Apple (needed to increase maximum health).

Now head back up into the cave, fight your way through another group of dark elves, then crawl through the next area. Your next steps involve clearing golden ores by exploding fire vessels and destroying hive nodes with twilight stones. See the correct angles in the images below.

Clear the last few hive nodes by rotating the huge lantern with your axe once you’ve climbed up. After this, you’ll want to destroy the Nightmare Hive and then scale the wall.

In the area where the Hafgufa is, blow up the ore deposits to your left by throwing your axe to unlock a path.

Open the Hive Cage on the Surface

Following the main path, climb your way up and scale through a breakable wall, you’ll eventually find the Legendary Chest which contains the Shoulder Straps of Radiance Chest Armor.

Now, exit The Belows and head northwest until you find a red pulsating node. See the images below for reference.

Destroy it by quick tapping the (O) button. This will free the Hafgufa from the Hive cage, clear the dessert storm, and complete the Favor.

Watch this PS5 Gameplay video by theRadBrad to learn more about the game: