New legendary cars, a Vision GT, and a new circuit. 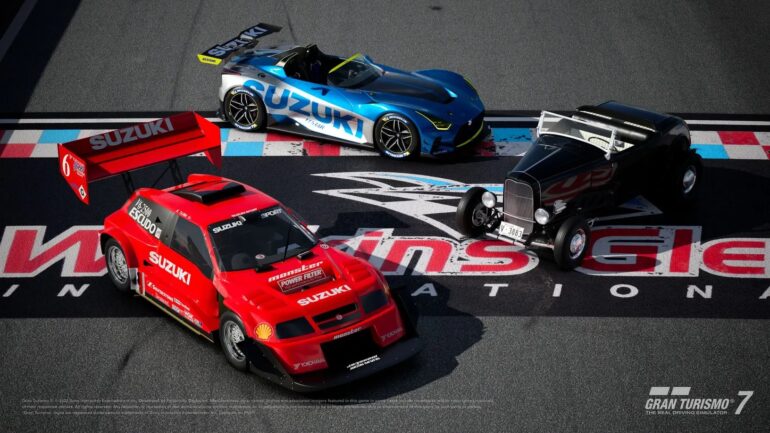 The Suzuki V6 Escudo Pikes Peak Special ’98 is the first of the two legendary cars introduced with the new update. It returns to the series for the first time in a decade. It is a legendary car developed specifically to compete in the most extremely harsh conditions for any race car in conquering a very dangerous hill climb. It has a new design using aluminum space frame, the powertrain has been extensively modified, and has a fully tuned 2.5L V6 engine.

Another legendary car is the 1932 Ford Roadster which gets introduced in this latest update. In the 1930s especially in the US, the Hot Rod was popular and an iconic part of American culture. The Ford Model T and the later Model A and Model B were heavily modified by their owners. These got exterior modifications such as removing wheel arches, and over the years, powerful engines were then added.

The Suzuki Vision Gran Turismo (Gr.3 Version) is a model that realizes the Suzuki’s motor sporting prowess and extensively tuned to meet Gr.3 regulations. The base version of this beautiful car uses the 1,340 cm3 (1,340 cc) Hayabusa engine linked to 3 high-power electric motors on an all-wheel drive powertrain. Gr.3 version has a different version: it changed to a simple front-engine, rear-wheel drive layout with a V8 twin-turbo powerplant comprised of 2 Hayabusa engine blocks for a total displacement of 2680 cm3 (2,680 cc). The engine becomes a monster that offers a maximum of 577 BHP at 10,000 rpm.

Watkins Glen International has the nickname The Glen. It is a very historic road course located in New York State, 260 miles northwest of New York City, which opened in 1956 and surrounded by rolling hills. The first half of the track has the high-speed sections with mid to high-speed corners. The latter part of the track has tight, technical turn combinations.

On the Gran Turismo Café extra menus got three new options which are: