Guardians of the Galaxy – Where to find all Gamora outfits

A complete guide on where to find all Gamora outfits in Marvel's Guardians of the Galaxy. 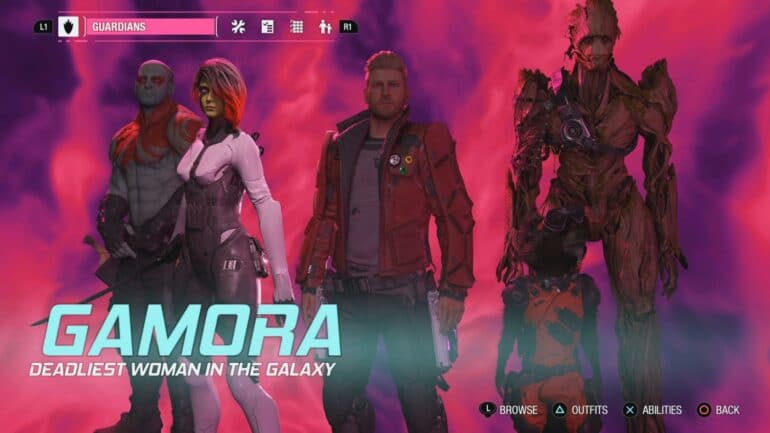 Make sure to clad and glam Marvel’s Guardians of the Galaxy‘s only heroine, Gamora, by unlocking all of her various outfits in the game. Some of these outfits are similar to the comic and the film adaptations of her. Gamora was a Zehoberei assassin before joining the Guardians of the Galaxy, she was Thanos’ adopted daughter and Nebula’s adopted sister.

By finding all Rocket outfits, it’s one of the things you have to complete to get the Fashion Passion trophy on PS4 and PS5.

Where to find all Gamora outfits in Guardians of the Galaxy

In Chapter 3, shortly after fighting some Jellies where Rocket has to use a console to bring down a platform, proceed to take the red ramp to an area near a crashed spaceship. Take the optional path to the wall opening off to the right instead of following the main central pathway. Squat down and enter the cave by moving forward.

Destroy the gray sticky residue covering the cave entrance to gain access to a new area with some Jelly-type enemies. Keep going until you come across the outfit chest near the ledge, and then squeeze through the small gap to get it. Unlock the chest and that’s how you will be able to obtain the Guardians of the Galaxy (2014) Outfit for Gamora.

During your search for Ko-Rel and Nikki in Chapter 7, you’ll come to the same spot as Nikki did in Chapter 2 where you’ll have to ask Groot to build a bridge for you and then descend three flights of stairs. If you make it all the way to the basement, you’ll notice that the water has electricity flowing through it.

To turn off the electricity, shoot the switch behind the water with your electric gun. Now tell Gamora to cut through the flooded area’s pipes to reveal the outfit chest hidden behind them to retrieve the Nova Corp Outfit for Gamora.

Following your encounter with Mantis, you’ll find yourself in a cave. When crossing the river, you will see a waterfall on your right as you proceed. After passing through the waterfall, you will come across the outfit chest containing the Five Horsemen of the Apocalypse Outfit for Gamora.

In Chapter 12 – Knowhere to Run, after some enemy encounters, you’ll have to ask Drax to tear the ground open so you can slide down a slope. When you get to the bottom, turn around and crouch under the rubble. To find this outfit chest, cross over to the other side to get the Casual Kill Outfit for Gamora.

Immediately following the first enemy encounter in Chapter 13 where you fight two large enemies with spores, Gamora must scale and climb a wall on the right side of the screen in order to proceed. Instruct her to assist you in getting to the top. The outfit chest can be found at the very top. You can unlock the Black Vortex Outfit for Gamora prior to ordering her to cut through a couple of large icicles.

After an enemy encounter in Chapter 14, you’ll find yourself falling into the mines. In the mines, you must freeze waterfalls to create platforms. After freezing the second waterfall, use your visor to see three more waterfalls to freeze. Doing so will lead to a wall gap, behind which are crafting materials and the outfit chest of the Chosen Daughter for Gamora.

Getting the original Golden Guardians outfit is the easiest compared to the others. You immediately get to unlock the skin after getting into the Hala’s Hope to stop Grand Unifier Raker and Nikki in Chapter 14.