Guardians of the Galaxy – Where to find all Rocket outfits

A complete guide on where to find all Rocket outfits in Marvel's Guardians of the Galaxy. 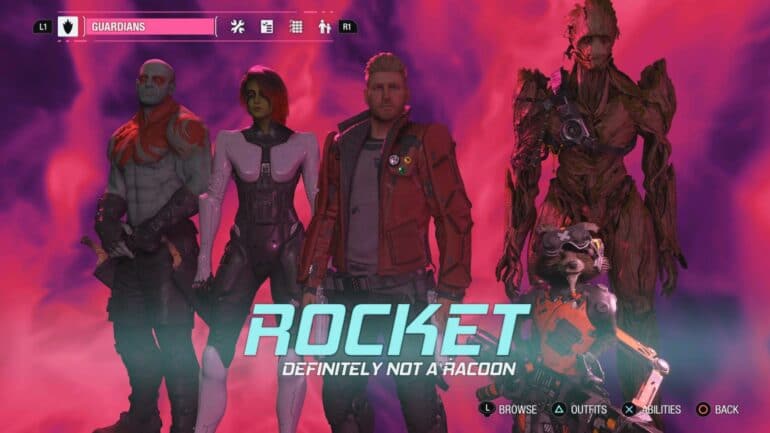 Super-hero games like Marvel’s Guardians of the Galaxy will always have cool outfits to find and unlock. You can be assured that Rocket has his own set of outfits to look for. Some of the outfits are familiar especially if you’ve followed the comic and the film.

By finding all Rocket outfits, it’s one of the things you have to complete to get the Fashion Passion trophy on PS4 and PS5.

Where to find all Rocket outfits in Guardians of the Galaxy

In Chapter 1, after following the mission path, you should already be in the area where Rocket decides which way you should take — in which he chooses the left path as the right one is a ‘dead end’. However, along the right pathway, follow the blue floorplates, and by the left side, there should be a way down. After this, you should see the outfit crate.

After solving the puzzle in Lady Hellbender’s throne room in Chapter 4 and also getting the Drax – Guardians of the Galaxy (2014) outfit, you’re to take the elevator down to another area full of sleeping goons. Instead of following the path to the left, there should be a table to the right where you can vault over.

Follow the path, and you will eventually reach stacked crates with a small opening at the bottom. Crouch to get past the crates, and immediately to the right, you will see the outfit crate.

In Chapter 7, you will be in a red-lit room caused by a big monitor with the error message “Nexus Terminal Offline”, and there is a puzzle that you need to solve by rerouting the power by shooting them with Star Lord’s electric guns. This will be the part when the game will teach you how to command Groot to lift sections of the ground to lift you up to unreachable places.

Once you reach the top, head towards the open ventilation shaft to get to the next room. Jump down, and the room located to the right is locked behind a door. Solve the puzzle by shooting at the circuits that can be found to the left, or you can use Star Lord’s visor to find it.

After unlocking the door, you should immediately see the outfit crate by looking at the right.

After your battle with the Ogrodes in Chapter 10, you’ll be given a chance to explore the area. There should be a head statue with a crack. You won’t be able to command Drax since he’s been under the influence of Raker. You will need to make do with Rocket. There’s a small hole to the left of the head statue where Rocket can fit into. Command Rocket and he should be able to destroy the head statue, revealing a small and narrow path for you to squeeze through.

Be careful as the other side is filled with toxic gas. You will need to use Star Lord’s ice guns to cover the holes to clear the area. After this, there’s a platform that Groot can lift. Once you get to the top, follow the path until you see the place where you have to go through a ledge that leads you to the outfit crate.

In Chapter 12, Knowhere gets hit by the Church of Raker. As the marketplace is in flames, you will face a couple of Raker’s goons. Before you go through the small gap following the Faith energy, there is an outfit crate behind Rocket. You will need to use your wind gun to pull the door off to get it.

Once you get into the forest where it’s filled with dangerous flora that releases toxic fumes in Chapter 13, you head straight and don’t forget to activate your visor. With your visor active, you should get an indicator that a component is close. Follow where the indicator leads and you should see the outfit crate just beside the advanced components along with a few poisonous plants.

You immediately get to unlock the Rocket – Golden Guardians skin after getting into the Hala’s Hope to stop Grand Unifier Raker and Nikki in Chapter 14.