Meet the lovely people of Raven Crooks in Hello Neighbor 2. 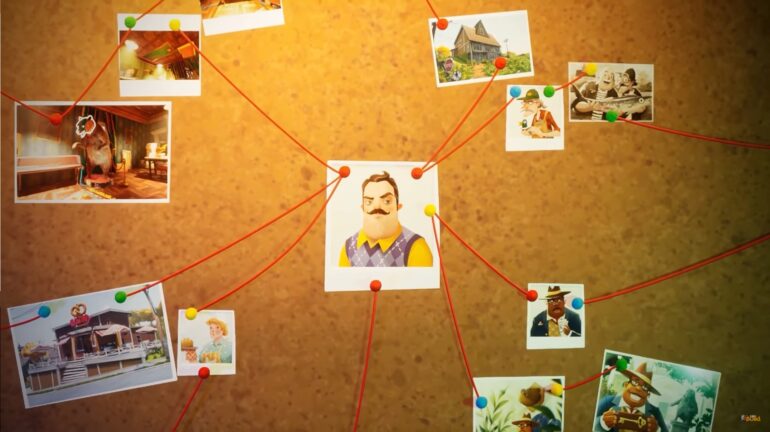 The Hello Neighbor 2 characters make up for most of the mystery surrounding the game. In the small community of Raven Brooks where the game takes place, almost everyone has skeletons in their closet. Say hello to the characters in Hello Neighbor 2.

Here are the Hello Neighbor 2 characters:

Beware that some of the characters listed above are possible spoilers due to the nature of their existence. While we do our best to keep Hello Neighbor 2 fresh for you, there are some characters that could be considered spoilers just by mentioning their name. Particularly with Aaron Peterson.

Quentin is the protagonist of Hello Neighbor 2. An inquisitive journalist working for Raven Brooks Banner who is investigating the missing children of the town. Quentin has set his sights on the mysterious and reclusive Mr. Peterson and is more than willing to break into homes to uncover the truth. This habit of his unfortunately puts him at odds with the police.

The mysterious neighbor from the first Hello Neighbor is back again. Theodore Peterson is currently hiding from the police after the events of the first game. Although rumors have been circulating that he’s at the abandoned museum, the people of Raven Brooks keep a wide berth from getting involved with him.

The Guest is a mysterious crow figure who was seen in the pre-alpha of Hello Neighbor 2. Whatever it is, it has been seen to be kidnapping children trick-or-treating and locking them up in the attic.

The partner of Officer Nielson who has also been assigned to investigate the missing people. He’s the shorter and lankier of the two cops in Raven Brooks. He particularly doesn’t appreciate the presence of nosy reporters.

The partner of Officer Leslie who has also been assigned to investigate the missing people case. He’s the larger and bulkier of the two cops in Raven Brooks. He particularly doesn’t appreciate the presence of nosy reporters.

The friendly owner of a baker shop in Raven Brooks. However she won’t tolerate any nosey reporter snooping behind her bakery.

The Mayor of Raven Brooks who doesn’t seem to be too invested in his mayoral duties. He can often be found playing with his dog, Skipper, and relaxing in his large lavish mansion. However if there’s anyone who knows some of Raven Brooks’ dark secrets, it’s The Mayor.

The missing child that was seen photographed in the Hello Neighbor 2 launch trailer. Just who is this kid and what does he have to do with Mr. Peterson?