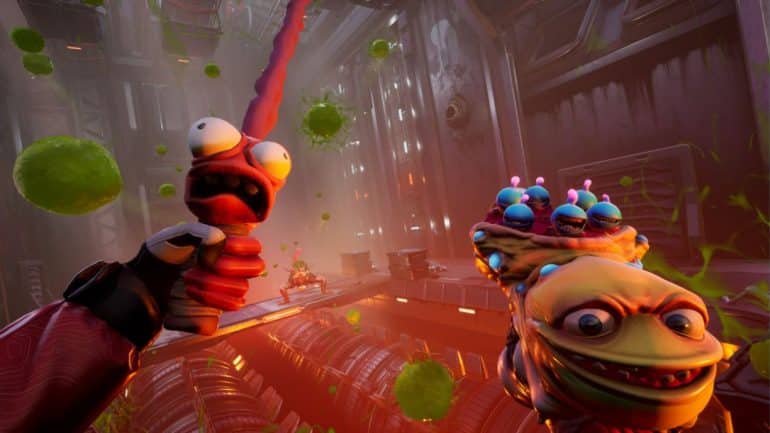 High On Life takes us on an intergalactic journey along with some familiar voice actors and the creators of Rick and Morty. Although Justin Roiland himself will undoubtedly perform a large number of starring roles, it is evident that the game made use of a number of well-known actors.

With the game having just been released, taking a peek at Squanch Games’ cast is a good thing to consider. As such, here’s a rundown of every actor/actress who is playing a significant role in this storyline.

Here are the High On Life Main Cast and their Voice Actors:

Gus, voiced by JB Smoove, is a frog-shaped gun that fires numerous rounds at once using its tentacles, much like a shotgun. Smoove has better comedic timing for live TV than for animation, but we have no doubt he will do well in any medium. He first became well-known through his lengthy run on Saturday Night Live, and then he went on to star in such hit comedies as Curb Your Enthusiasm and The Millers. His role as Julius Dell in the two most recent Spider-Man films has made him recognizable to Marvel fans.

Kenny, your starting firearm, is voiced by Justin Roiland himself. Over the past decade, his voice has become woven into popular culture as he has provided the voices for both Rick and Morty on their series. Many additional animated series, like Solar Opposites, Adventure Time, Gravity Falls, and Fish Hooks, feature his voiceover work as well.

Lizzie, the main character’s euphoric and hilarious sister, is voiced by Laura Silverman. Films in which Silverman appears include Dr. Katz, Professional Therapist (1995), Half Baked (1998), and The Comeback (2005).

Knifey, your character’s highly verbose melee weapon and backup service during tough battles, is voiced by Michael Cusack. Michael is a familiar face in the world of animated television, having starred in, created, and directed episodes of the series Smiling Friends. He also contributed to Bushworld Adventures, a Rick and Morty parody short set in Australia.

Creature, narrated by Tim Robinson, is a weapon used for crowd control; it launches tiny monsters that jump on foes and consume their flesh. Tim’s voice can be heard in a number of animated projects, including Star Trek: Lower Decks and Solar Opposites, as well as the Netflix sketch comedy series “I Think You Should Leave with Tim Robinson.”

Many of these voices will be familiar to players from numerous other popular Hollywood animation and game productions, which are as follows:

It’s likely that Roiland was able to pull some strings again. Tara Strong, Nolan North, and Jennifer Hale have been in dozens of games throughout the years, while the rest of the cast is mostly from animated or live-action productions.

That’s all the High On Life Voice Actors and Cast. To stay up to date on the newest High On Life news, guides, and features, you can check out our related High On Life Articles here.

Also watch GameClips’ video on High On Life feature all the game’s cutscenes: