A guide on how to efficiently farm Frigate Modules for No Man's Sky. 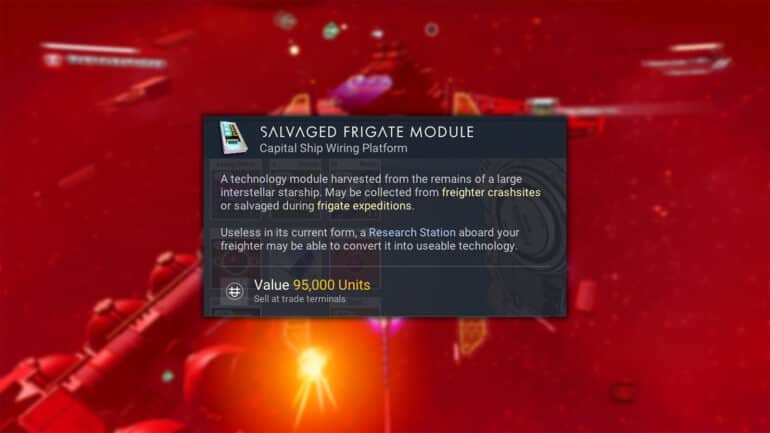 Salvaged Frigate Modules in No Man’s Sky are a type of valuable resource needed for freighter and frigate upgrades in the game. Now that the Endurance update has been released that brings out more focus on the newly overhauled freighters and frigates, the need for these modules have been on the rise once more.

In this guide, we’ll list down the methods of how to get Salvaged Frigate Modules in No Man’s Sky Endurance update as well as ones that can be farmed easily and lucratively.

Depending on the play style, players can choose from these activities and do the ones that they fancy. Below are all the ways that you can get Salvaged Frigate Modules in No Man’s Sky Endurance update.

Frigate Expeditions are the best sources of Salvaged Frigate Modules when talking about success rate as players will more often than not get these modules in most deployed expeditions. However, there is a catch: these expeditions can last from between 1 hour to more than a day in real time, and the drop rates for the modules only get better the longer the expedition is.

The more frigates that you have in your fleet, the better since you can send multiple fleets to do multiple expeditions at once. Frigates that excel in the Industrial stat are recommended for this as Industrial expeditions give out the most Salvaged Frigate Modules.

Despite this, Frigate Expeditions are still a recommended way to farm for modules since it can run passively in the background as you do the other farming activities.

For those who don’t mind to get their reputation tainted, going for the piracy method is one of the best ways of farming Salvaged Frigate Modules, and is also one of the fastest ways to earn units and valuable resources. This method can be done with or without the quicksave method to speed things up.

For this method, you’ll need the following:

Your objective for this method is to look for freighters that spawn in space to loot their Cargo Pods by blowing these pods up. You would want to do this in a Pirate-controlled system for two things: 1.) Sentinel ships will not spawn to defend the freighters you attack, and 2.) Freighters in these systems often carry contraband that sell for high amounts in regular systems.

While out in space, look for Freighters that spawn in as they exit from hyperdrive. You will know that it is a good freighter to target based on the amount of Cargo Pods that they hold. You can do a quick fly-by first and familiarize yourself with which parts are the pods; hovering your reticle over them should let you know and should also show you their contents. Different freighters have different looking pods, but they’re mostly either spherical or cylindrical in shape.

Once you find your target, you can then shoot at these Cargo Pods to blow them up and get their loot inside. If you are doing this in a regular system, a Sentinel ship will spawn to attack you, otherwise you will only have to deal with the freighter’s laser defense. Be careful when shooting as you only want to hit the pods themselves; do not shoot at the other cargo ships even though they show that they’re holding loot. Hitting these smaller cargo ships will cause your reputation towards that faction to go down.

Once you’ve destroyed all of the ship’s pods, you can then fly back to your freighter to do the exploit, or fly away to a safe distance and engage your pulse drive. Some people find that pulsing some distance and getting out of it to spawn new freighters is faster. But if you want to learn the exploit, continue reading along.

To do the exploit, simply land inside your freighter and exit your ship. This will create a quicksave which you can reload back into right away. You’ll keep whatever loot you got, but it will reload everything else, which means that the freighters that you’ve just stolen from should have all their pods repaired and filled with loot once more.

You can do this cycle indefinitely to your heart’s content, only taking breaks to sell the loot you got to clear out your inventory. Although the pods still have a very low chance of dropping these Salvaged Frigate Modules, the repeatability of this method makes up for it.

Although the drop rate for the modules isn’t any much better than blowing up Cargo Pods, the sheer number of them within a more compact space balances things out. Plus, this is the only place where you can get Tainted Metal which can either be processed for Nanites, or can be used to exchange rare items from the Scrap Dealers in space stations.

The downsides to this method are that you need to be well-equipped to handle the hostile mobs inside the ship, and that finding a Derelict Freighter can either be super rare, or super expensive. The mobs can be cheesed through accessways, but it can make the entire process too time consuming. And though it is possible to encounter a Derelict Freighter while pulsing, the encounter rate is low, and the cost of an Emergency Broadcast Receiver can be too expensive just to find these freighters.

Crashed Freighters are also a good source of Salvaged Frigate Modules. They can be found on planets just through a random encounter, or they can also be found using Planetary Charts (Distress Signal). Within these Crashed Freighters are a number of Freighter Storage Units that are either within the sections of the freighter above ground or buried underground.

Opening these storage units will require some few resources to fix their lock panels, such as Cobalt, Ferrite Dust, or Sodium. Once opened, these can then give out different kinds of components, including Salvaged Frigate Modules. Be careful when opening these storage units as they can also emit radioactive materials that can quickly eat away through your shields, so be ready to run to a safe distance.

Planetary Charts only cost 1 Navigation Data, which you can also farm in advance, however using these charts on a planet will not always point to a crashed frigate right away; it may point to a distress signal coming from a crashed starship or some other abandoned building. One way on how to make this method a bit more effortless is to use the Planetary Charts one after the other before actually flying towards the markers as you can narrow down which ones you would want to go for to find a crashed freighter.

Salvaged Frigate Modules can also be obtained via rewards from completing missions from Mission Boards in space stations, or through Nexus Missions inside the Anomaly. The advantage of doing missions from Mission Boards is that they can be stacked so doing the same tasks count towards multiple missions, while the advantage of doing Nexus missions is that you can do it with other players who join the missions.

The downsides to these methods is that you will either have to do some system hopping to see if the Mission Boards will give out missions that specifically reward the modules, or you will have to do some waiting before the Nexus missions reload its mission list to show ones that reward the modules. Based from experience, doing Nexus Missions are more worthwhile since looking for the right missions takes less effort.

If you like this guide, be sure to check out our other No Man’s Sky articles:

Check out this video by Jason Plays showing how to do the piracy method of farming Frigate Modules: