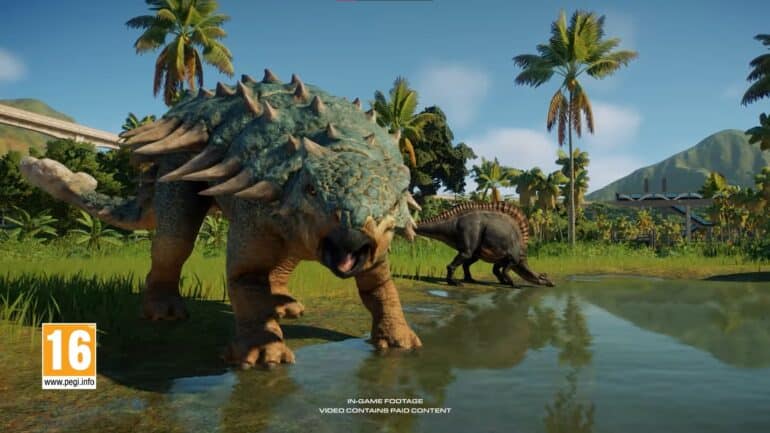 The new Camp Cretaceous Dinosaur Pack will be available early next month on March 8, 2022. This will be released on PC via Steam, Epic Games Store, GeForce Now, PS5, Xbox Series X/S, PS4, and Xbox One. It can be purchased for only $9.99 USD.

This pack is inspired by the Universal Pictures, Amblin Entertainment and DreamWorks Animation’s Netflix series Jurassic World: Camp Cretaceous. This new pack will allow players to add a new group of awe-inspiring prehistoric species into their parks. It will include two entirely new dinosaurs, two variants for each existing species, and eight skins.

One of Dr. Henry Wu’s first hybrid creations, the Scorpios rex, is a fearsome carnivore. Blood-red eyes, charcoal-black scales, prominent spikes, and jagged, uneven teeth characterize this impressive species. Known for its aggressive nature, it was originally deemed unfit for display to guests and is bound to draw in the crowds.

Named for the single crest adorning its skull, the Monolophosaurus is a medium-sized carnivore from the mid-Jurassic period with razor-sharp teeth and claws. The Monolophosaurus’ crest helps intensify its loud roars, aiding in communication. These new species, with their own dynamic behaviors and needs, bring exciting new challenges to players’ parks.

Also arriving with the pack are two captivating herbivore variants, which fans of Jurassic World: Camp Cretaceous will no doubt be familiar with: the Ouranosaurus, a peaceful, herd-dwelling herbivore with characteristic tall spines that are sure to capture the attention of park guests, and the Kentrosaurus, whose lethal-looking spikes are used only to defend this otherwise peaceful dinosaur.

Together with the paid DLC is a new free update that will offer players new features to tinker with like the Species Viewer, First Person View, new decoration items, some changes to the sandbox mode content, and a lot more of enhancements.

Jurassic World Evolution 2 is now available on PC via Steam, Epic Games Store and GeForce Now, PS5, Xbox Series X/S, PS4, and Xbox One for only $59.99.