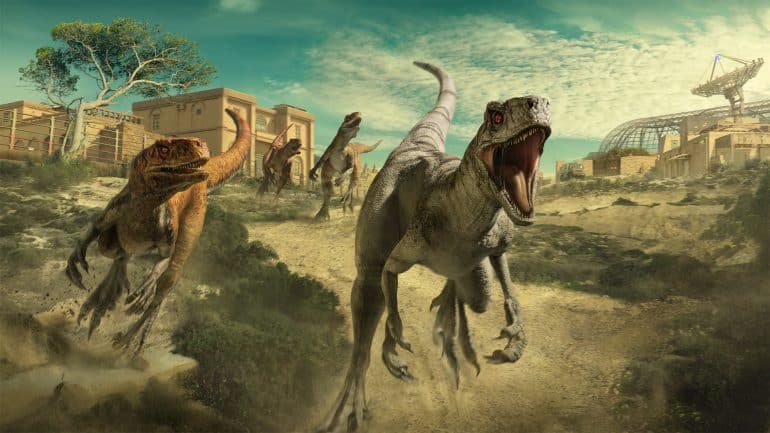 In this expansion, the scene will be set before the events of Jurassic World Dominion. Players will be going to the Mediterranean and attempt to manage multiple dinosaur facilities across three locations. There will be new prehistoric species, three new island maps, Malta inspired buildings, and a new campaign.

There will be new prehistoric species and skins. New variants of existing species and additional film skins are also revealed. This pack will have 12 body color and 7 skin patterns each.

More dangerous than the velociraptors with a bulkier body and boxier snout. It has four Jurassic World Dominion skins which are Ghost, Red, Tiger, and Panthera.

A herbivore known for its tusks and horned beak used to bite off vegetation. Has powerful forelimbs, and an unusual-shaped skull. It has a 2022 skin based on Jurassic World Dominion.

It possesses an incredibly powerful jaw and was once thought to steal other species’ eggs but has since been corrected since it is an omnivore. Has a distinctive head crest and feathers.

One of the smallest Tyrannosauroids to have ever existed. It is only a fraction of the size of its relative, the T.rex. It is known to be a quick and nimble hunter.

There are new 2022 variants for each species:

The new campaign will be set before the events of Jurassic World Dominion. Work together with Cabot Finch and key figures from the film including Kayla Watts, Soyona Santos, Barry Sembene, and Lewis Dodgson as players set up parks across three new Mediterranean locations. New species can be acquired via the Dinosaur Exchange.

Players will be required to work with both the Underground and Authorities, building trust with these organizations via various actions to unlock further opportunities like hatchery upgrades, locations, and more.

Update 5 will launch together with the new expansion as a free update for those who own the game. It will come with new levels and features, quality of life updates, and bug fixes. It also offers the ability to import saves from PS4 to PS5 consoles.

There will be 5 DFW Campaign maps as Challenge Levels that will be available after earning 7 stars across all maps in Challenge Mode. There will be some brand new Challenge Conditions which will vary across levels.

New behaviors for tiny dinosaurs in Update 5. There will be some adjustments to the collision behaviors to some tiny dinosaurs, so they will no longer collide with guests or vehicles.

There are numerous UI changes with Update 5. This ranges from transporting a dinosaur to icons for ailment and tranquilize. More details will be shared in the upcoming patch notes that will be released on December 8, 2022.