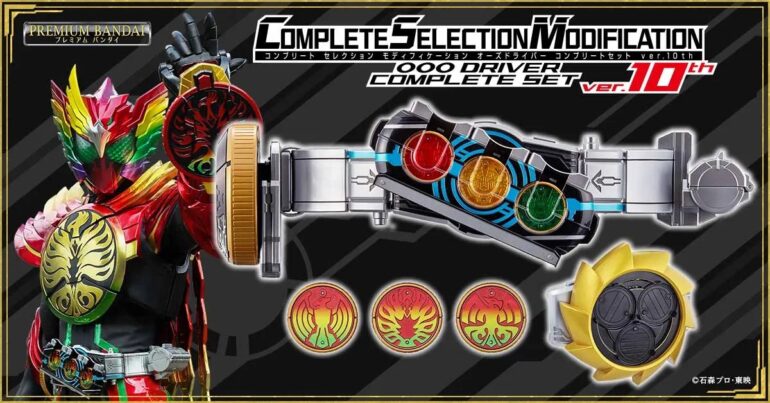 Details of each CSM Sets:

The CSM Kamen Rider OOO Driver ver. 10th Complete Set features OOO Driver, Poseidon Driver , an updated OOO Scanner that will have two new modes Modern Day and Ancient OOO Mode and also TaJaDol Eternity Core Medals. New BGMs are also included in the set from the TV series and its films. The price of this set is at 59,950 Yen.

This set will just consist of the OOO Driver, new OOO Scanner, and all 24 Core Medals seen on TV or in the films. The set cost at 31,130 Yen.

CSM Lost Blaze Set consist of four new PuToTyra Core Medals to be used with the CSM TaJa Spinner. Now, when activated in the TaJa Spinner, the medals unlock the Lost Blaze attack from the Kamen Rider OOO final episode. This set is priced at 2310 yen.

This set will only include the OOO Scanner that has been updated new BGMs and new sound modes, Modern Day and Ancient OOO Mode. This set will cost 12,980 Yen.

Each of these sets are currently available to order at Premium Bandai Japan and they will be released on September 2022. Pre orders can be made online or at local Bandai shops.