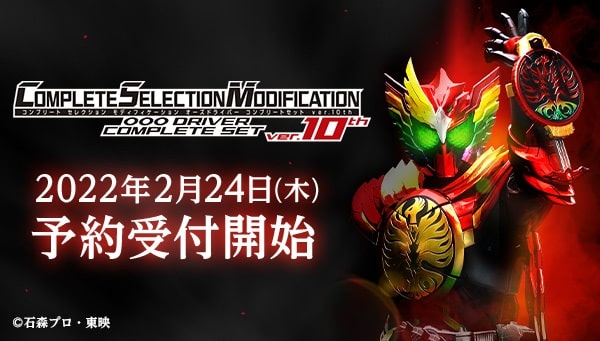 PBandai recently announced on their website that they will release a new CSM driver for the 10th anniversary of Kamen Rider OOO. Last year, BANDAI announced that new film entitled Kamen Rider OOO 10th: Core Medal Resurrection and in that film, new medals and items were found there. The new CSM set will feature new elements seen in said film, such as the Kamen Rider OOO Tajadol Combo Eternity, and will also contain all previously released Core Medals.

Not only that, BANDAI will also release the CSM OOO 10th version driver and the CSM 10th OOO Medal Scanner that will have new medals that can found in the whole series and especially new ones found in their new film. More details about the CSM set will be announced on February 24,2022.

Who is Kamen Rider OOO?

Kamen Rider OOO is the 12th Heisei Rider of the Kamen Rider franchise. The story of OOO tells of a story of Eiji Hino, a traveling man who has no place to call home and a tragic past. When coin-based homunculi known as the Greeed awaken after their 800-year slumber to attack humans and feed off of their desires, the disembodied arm of the Greeed named Ankh gives Eiji a belt and three Medals to fight the other Greeed as Kamen Rider OOO.

The mysterious Kougami Foundation approaches Eiji and begins assisting him in his fight against the Greeed, though their true motives are not clear. As Eiji fights the Greeed and their Yummy monsters, learning more of the Greeed and Ankh, he starts to find a purpose beyond his journey.

Shintaro Goto and Akira Date, who once fought the Greeed, fight back as the resistance. Hina Izumi, Chiyoko Shiraishi and others support them. And Eiji Hino, who had gone on a trip, returned. However, the power of the ancient OOO is so great that humanity’s inferiority cannot be shaken. Then, something happens to that “broken core medal”, and Ankh is revived. On the other hand, the mysterious Greeed Goda is born from the artificial core medal. The situation becomes even more chaotic… What will be the fate of Eiji and Ankh? Now, the battle of the kings for the survival of mankind begins…….!

What is CSM /Complete Selection Modification?

Complete Selection Modification sometimes abbreviated as CSM is a series of premium-level re-releases of the existing DX toyline, which are aesthetically more detailed, and are meant to mirror the show prop. Due to the functions also being show-accurate, they are typically engineered to resolve many issues and complaints with the original DX toy, CSM releases come at a much higher cost and are typically quite expensive. Each time a new CSM item is about to be released, it’s a tradition for the toy’s respective user’s actor to appear for the promotion or a cast member related to the show it originates in cases when the actors are unavailable.