A new legend, a new crisis 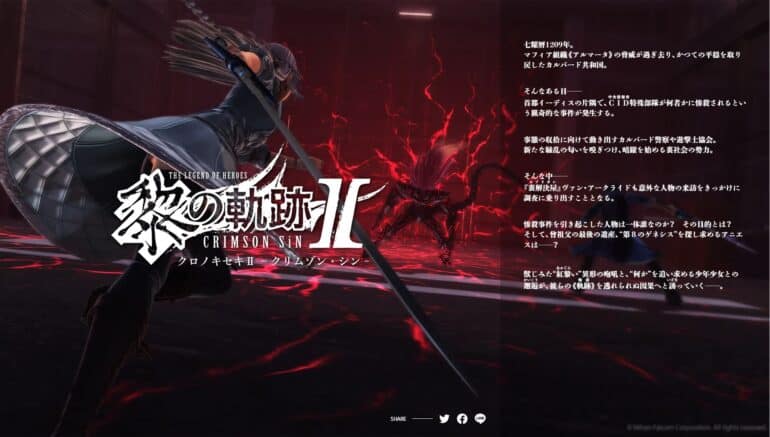 On Nihon Falcom’s official website, the next story of Calvard arc of the Kiseki series has been revealed. The name of the next title is called Kuro no Kiseki II Crimson Sin. With much deliberation, a lot of info was revealed about the game as well as the story on what players will expect in this new Kiseki game.

“One year has pass since the events that occured in Kuro no Kiseki. Peace has been restored to land of Calvard after the threat of the mafia organization, Almata. One day, a murder was found in the capital city of Edith in which the victim belongs to the CID (Central Intelligence Division). The Calvard Police Force and the Bracer Guild are sent on a mission to corner and apprehend the suspect behind the incident and prevent the underground world of Calvard to wreck chaos and begin riotting once more.

Meanwhile, Van Arkride goes to a long journey of self discovery to find out more of his past and find out what truth lies beyond a case given to him by a mysterious client.

Who is this new enemy that threatens the peace of Calvard? Who was the murderer? What is his purpose? And what is the legacy left behind for Van by his great grandfather known as the Eight Genesis?“