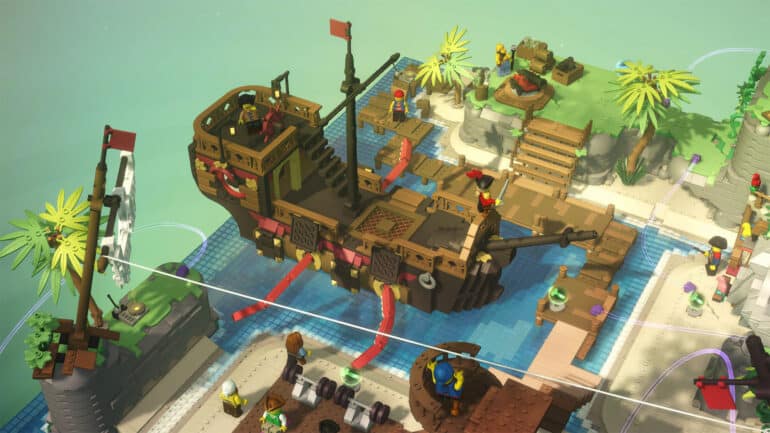 The Caribbean is the final world that players can visit in LEGO Bricktales. Players will find themselves in an island which is home to the pirates. However, these pirates aren’t the fearsome one and they actually need some help in finding a new ship that they can set sail with.

In this guide, we will talk about the Caribbean level in LEGO Bricktales, how to solve the builds and the puzzles, and locate the collectibles within the level.

Once you arrive in the islands, talk to Pirate Cook Francois and he will ask you to gather coconuts for him so that he can cook a dish for the captain. To gather coconuts, head over to the coconut tree. There will be one coconut on the ground that you can pick up, while the rest will fall down once you use Smash near the tree. Once you have gathered enough coconuts, head back to the chef.

Before proceeding to the next part, you can opt to go for the first build.

For the first build, you just need to build a sandcastle. There’s no requirement other than using at least 4 bricks in the build.

Talk to Francois once again and he’ll need for you to build a pig cart that can hold all the coconuts. There will be a boundary shown in the build where the coconuts will be so just make sure to surround it properly with bricks.

After this build, Francois will head out into the next part of the island. Before following him, you can start on working on the next build.

For the next build, you will need to build a raft. It has fill markers that have to be filled up completely. This raft will be needed later on for the story quest.

Another build can be done at this point once you reach the small island via the raft.

As you ride the raft to the small island, head towards the fisherwoman to start another build. You will need to build her a pier where she can fish on. The pier can be tricky to deal with, especially with the second requirement, but as long as there’s a clear unobstructed walkway from the land to the center part of the ends of the pier, then it will be fulfilled.

Once done, you can take a minute to explore Boo’s Shop for the stuff on sale. Then, you can proceed to the next part of the island. Once you arrive there, talk to Pirate Captain Patti Eyepatch for the next build.

Next, you need to build a bridge since the cannoneer just blew up the previous one. This bridge has to split into two paths. Start by connecting the two level paths, then build the stairs to the higher path somewhere in the middle of the first path.

After building the bridge, head to the Parrot Language as he will need some help in getting the parrots who know where the hidden ship is. Then, make your way to the cannoneer to trigger a cutscene of him blowing up a hole in the wall. Explore the hole and go through the cave. You’ll arrive at the first part of the island once again, but you also have access to the Skill Temple this time.

In this Skill Temple, you will learn the Hover skill which lets you ride the purple rails. It also allows you to travel a bit faster than just walking on foot.

Don’t forget about the treasure chest. To reach the chest, move the center rail to the right, then raise the small platform on the right. Switch to Dimension and reveal the lever that lowers the ledge where the chest is.

Once you have the parrot, return back to the teacher to get the next build.

For this build, you will need to build a perch for the four parrots. This perch will be hanging from the top, and the parrots cannot be rotated. Start off with the middle part and make it long enough to give the parrots some head space. Then, use the plate to allow to parrots to hang on it. Check the simulation to see if the perch is balanced and then adjust accordingly.

For the Yoga Studio, you just need to follow the requirements of placing down the necessary bricks, such as the barkeeper and the yoga mats.

After completing the studio, talk to the barkeeper once again and he will ask one more favor for his friend. You then need to talk to the Peg Leg Specialist who is up on top of the outlook mast. He will ask you to find a piece of drift wood for the peg leg.

For this build, start on the first few steps at the base. Then, to get a better view of the positioning of the next blocks, start building the next platform on one of the arms of the middle pole. Then, fill in the gaps in the steps while keeping it to just at brick height. Keep doing this until you reach the top.

For this build, you need to build two gutters using the slopes to lead all of the water droplets into the barrel. All droplets should get inside the barrel to complete the build. You can refer to the screenshot above and adjust the bricks accordingly. After collecting enough water, talk to Francois again and he will give you the cracker.

Give the cracker to the parrots and they will say that the ship is hidden behind the large skull. You then need to talk to the cannoneer and ask him to blow the teeth off of the skull. Afterwards, head to the rail end near the bridge and use Hover to get to the other side of the skull.

You will then arrive inside the cave and you need to make your way over to the other side to where the ship is.

For this build, you need to create a lift, but you also need to include all the big and small barrels. Keep the build as symmetrical as possible by keeping two of the big barrels to the side while the other one is behind the lift, and then adjust the small barrels’ positions if the lift is tipping too much to one side.

Once completed, ride the lift down at the bottom, and then use the wheel to raise the lift back up for later.

Next up, you need to build a gangway so that you can cross to the ship. You will need to find some wooden blocks and metals brackets to use for it first. They can be found around the cave. For this build, you can simply stack the 2×1 bricks, add two of the 2×1 plates, and then add a slope with is lowest side facing towards the ship.

After the build, make your way to the ship and talk to the captain. Once you arrive outside, you will then receive the Happiness Crystal.

Head back home to the Theme Park and build the final attraction. Once it’s done, you will get a short cutscene and then the credits will roll.

In the Caribbean level, there are a total of 20 animals to be collected. All of them can be acquired through a singe run. Check out our complete guide for the animal locations in All Animal Locations in Caribbean Level LEGO Bricktales.

In the Caribbean, you will find four (4) of each type of animal, with the Hermit Crab as the main animal for the level needed by the Hermit Pirate.

There are a total of 13 chests to be found within the Caribbean level. Check out our guide for the chest locations in All Chest Locations in Caribbean Level LEGO Bricktales.

There are 10 different items on sale in Boo’s Caribbean Shop and they all count towards the level’s completion when purchased. You will need a total of 250 clams to purchase everything in the shop.