In this preview for Lil Gator Game, we look fondly back at the make believe games we used to play as kids. 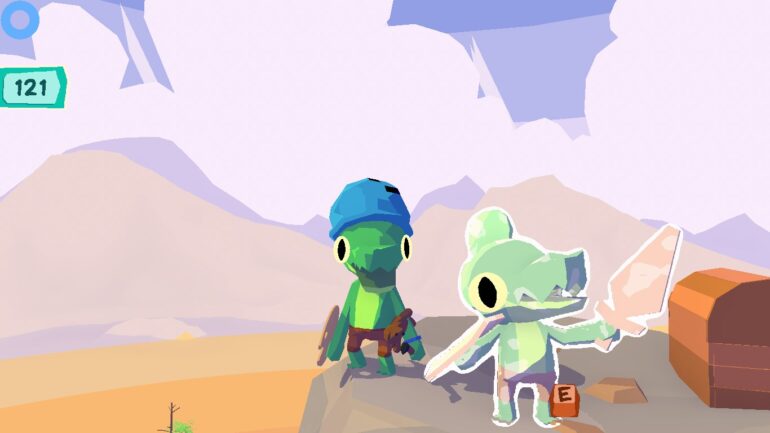 When I was younger, I used to put all sorts of toys into a small backpack. Afternoon cartoons would have me believe that the floor is lava, and the only way to stay safe is to use everything in the bag to navigate the room. Tennis balls would allow me to ‘touch’ the ground for a few seconds, shoe laces attached to a plastic hanger would be a rope and hook, and of course pew pew laser guns are there to keep the monsters at bay. And it was more fun when my childhood friends played along. But what does that have to do with a videogame, you might ask? Well, that’s what Lil Gator Game is all about.

Lil Gator Game demo starts with lil gator trying to convince his big sis to play make believe like they used to. Problem is, big sis is a college student now and has a big paper due. Undeterred, lil gator and his friends get together to remind big sis how fun their game was. To do this, the gang scattered cardboard cutout monsters all around the island and designed ‘quests’ for the lil gator hero to prove his worth.

The island we are in is sandbox in nature, we can go around the whole place – scaling cliffs (ala BOTW), finding treasure chests and taking the cardboard contents inside, or racing to the end of a finish line. There is quite a bit of things to do besides doing the main ‘quests’. Every once in a while, you’ll come across other kids who might have a problem for you to solve. Oh, and before I forget, we are awarded with cardboard pieces. This currency can be exchanged with a vendor for ‘power-up’ items. Or you can craft the pieces together to make yourself some ‘equipment’. It’s quite versatile.

Thankfully, there are ‘monsters’ in every which way you look, so you don’t have to worry about running out of coin anytime soon.

The first ‘quest’ players might stumble upon is finding a legendary weapon. Lil gator’s friend Jill is surrounded by monsters, and the only way to save her is to pull the sword from the stone hidden within the woods. So, naturally, the hero ventures into the deep wood and retrieves the sword to save his friend.

After the task, Lil gator snaps a selfie to commemorate the completion of the quest. Jill thanks our hero for his services but is unable to continue cause she has papers to finish at the moment. As entertaining as this part was, I really feel for lil gator. He’s the only one committing to the bit, while his friends are being functional members of society. (I jest, of course.)

Our next task involves our friend Martin, who’s chilling on a deck overlooking the island. His ‘quest’ required us to fetch a bucket. By the way, let it be known that Martin’s favorite kind of quest is a fetch quest. Just getting that out there. When we’ve completed our heroic task, our reward is the hero’s shield. Technically, it’s purpose is to protect us from cardboard monsters, but it makes for a wicked make-shift sled. Going down hill has never been this good in the history of ever. That’s our hero for ya!

Our final quest sees us talking to brave Avery. Apart from lil gator, he’s the only other friend who’s truly committed to the bit. Unfortunately, his imagination got the better of him, and the storyline he made up for the quest was a little too complicated. He then took a step back, and told our hero that his quest was going to be crafting quest in which our hero was to make a wizard’s cap. Our reward for crafting the cap… was a glider. (an oversized t-shirt) I was as confused as lil gator, but there it is. The quests are complete! The only thing left was to report back to big sis.

You can probably guess that things didn’t go as plan, and that big sis still has a paper due. Though she did thank us for trying to cheer her up, but in the end, she doesn’t want to get in the way of lil gator’s fun. In the end, everyone was bummed out that big sis wasn’t able to detach herself from work… everyone, except for lil gator. He figures that if he made the game bigger and more bombastic, that would be enough to make big sis play with him again. The optimism of this little one is something else. It’s not enough that he gamified his afternoon, he needs to go all-out for next time. What a champ.

Technically, this is the end of the demo. There are some side activities still to do, and characters to talk to, but that’s it till the game fully releases.

I had a pretty fun time with this demo. I clocked in more than an hour’s worth of playing for something that was meant to be played for 30 minutes. I don’t know. Maybe it’s cause of all the serious, adventure games I’ve been playing as of late. There is just something calming about playing a chill game without having the weight of the world on your shoulders. Know what I mean? However way you take it, a change of pace every once in a while does a gamer good.

Look forward to Lil Gator Game when it releases sometime in 2022. You can still check out the game during Steam Next Fest until October 7th.

For more information about the game, check out our previous article about its announcement. You can also wishlist the game on Steam!