Lost in Random Two-Town Guide: Story Pages and Side Quests

Check out all of the locations of the sidequest and the Storybook Pages. 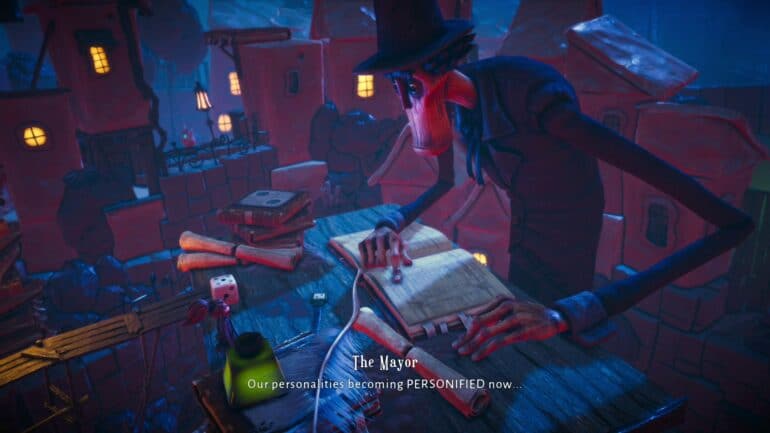 Looking to complete your Story Pages and planning to complete the Side Quests on Two-Town in Lost Random? You have come to the right place. This is a twisted town that has changed every day by a roll of the dice that even the mayor is affected by it. As part of our Lost in Random guide, this is where you will find all of the story pages and a guide for all side quests.

Where to find all Story Pages in Two Town?

The first Storybook Page can be found after talking to Jilted Jane. Just go up the path and find the Storybook Page beyond a pitfall. There is no way you can jump across, but there are two noticeable tiles on the floor.

Step on the first tile and command dicey to go to the second one to reveal a glowing blue target. Shoot it with your slingshot and it will open up half the wooden bridge.

Stand on the tile where Dicey is and let Dicey go to where you were standing before to reveal another target. Shoot it and it will complete the wooden bridge. You can now safely cross to the other side and collect the Storybook Page.

This quest involves Little Joe where you are on your way to Two-Town Square for your main objective. He is hounded by the Queen’s robots and all you have to do is defeat them in order to complete this quest.

A Reward To Die For

First, speak to Lisbette the Mysterious for some interesting yet creepy dialogue about the Dice. She promised Even a spell card in exchange for a Dice as well, the same as Dicey, your companion Dice. This then starts you to visit several people at Seller Street where you trade various types of things, from rare words to something as illegal as a dice.

Next, speak to Wordly Wanda at Seller Street, the big scholar catfish guy, and choose the second option if he asks you for something to trade for. He will then give you a very rare word that you can trade-off for something else.

Move further up Seller Street and find a tall seller with a hunched back called Max Petwell. Give him the rare word you got from Wordly Wanda. You get a Gubblegregger for the trade.

Now go to Scoundrel’s Alley and up some stairs just after you leave Seller Street. Go past a bridge and on an open space you will see your third trader, Little Joe. Trade the Gubblegregger with a strange, four-sided skull, but that was actually a dice! You get the Deck Modification that will make your deck stay at exactly 15 cards. You also get the dead Four-sided Dice. Return to Lisbette to complete the quest.

Two Sides to Every Story

This quest is to get three Bloobs that are found scattered in Two-Town. By getting these Bloobs for the Potion Maker, who has two faces and personalities, he can make a potion that could silence the other one forever.

The first Bloob can be found after you find Wordly Wanda, up a ladder. Just choose the third option to pick it up and then move on.

The second one can be found after Max Petwell and nearby Ratzaat Goo. It is just sitting there on a broken wooden staircase. Again, choose the third option to pick it up.

The third one is just above Odo Thump, who is quite annoyed by the noise that the Bloob is making. Travel through the staircase just behind him and there you will find the shrieking blob of a slime. Just follow the conversation to pick it up. Return to Potion Maker to complete the quest.

Two Old For This Bloob

Go to Two-Town Square to find Odo Thump, complaining about a noise that has been annoying him for a long time. It is just above him, just follow the stairs, walk past the planks and find… the Bloob. Just follow the conversation and pick him up.

Find Odo Thump again and he will thank you for finally silencing the noisy creature with a reward of 100 coins.

To start this quest, you have to go to the opposite side of the big Mayor in Two-Town: Royam. Just climb up the elevator and there he is above at Upside Downtown. Talk to him and after the long dialogue, the quest will be added.

The third inspiration is just behind Royam. Just go behind him where a path is seen and continue on until you get blocked by two wooden boxes. At the left side you will find it hiding in the wall.

Go back your way and instead of going to the right, go straight past beyond the plank and onto the left path and continue onward. By the end of it, you will find the fourth inspiration.

Return to Royam to battle it out with the rhymes. Here are the answers: Sleeping Eyes, Croon, Spiritual Bouquet. After that, it will complete the quest.

To read more Lost in Random guides, check the Threedom guide. Here is a guide to complete all trophies and unlock the Platinum Trophy.

Lost in Random is now available on PS4, Xbox One, and PC.